Recently Knot have taken a lot of the birding attention with record numbers seen at Snettisham in October producing some spectacular videos and photos. Some of these went viral and even appeared on the BBC quiz of the week’s news. Over the current seri…

Black-tailed Godwit have started arriving in reasonable numbers at Leighton Moss in recent days.  Several of these have long histories of spring sightings at Leighton and other very local sites having spent the winter further south on the Dee.&nbs…

One of the many things that has come out of the Knot work at Formby is the vast amount of data being produced by a small team of dedicated observers which nearly 4,000 observations being made.  These are all really valuable and without your help m…

Continue Reading » Not the normal Knot movement – 18th record of a BTO ringed Knot in Africa...

In early September I had a message from a friend near Liverpool with a photo of one of the Knot from Formby.  After a quick exchange explaining it was one from Formby and asking where he had seen it Peter told me it was taken by someone on the Azores!  Yesterday it was seen again a couple of km away from the previous sighting on São Miguel Island. 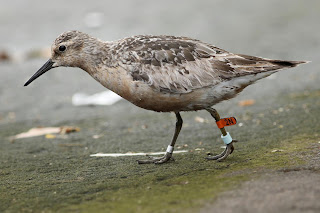 It will be interesting to see what happens to this bird. If it has survived for a couple of weeks there is a chance it could survive long term and perhaps reorientate to find it’s way back to the Dee, Mersey and Alt estuaries where it spent last winter.  Time will tell however it certainly needs to update its satnav.
What an islandica Knot is doing on the Azores is somewhat of a mystery.  On the Azores Knot occur regularly but in very low numbers.  Given the location it is likely most records are rufa Knot that have been caught in storms and blown over the Atlantic. Given the proximity of the breeding ranges of rufa and islandica it is likely there is occasional mixing of immature birds in autumn however an adult is quite a different matter.
This is the first record of a BTO ringed Knot on the Azores and is only the 3rd British ringed Knot to be found in any of Portugal.  Only one Portuguese ringed Knot has been found in the UK which was found in August 2013 in Lincolnshire which, remarkably, I was also involved in catching.  These low totals are probably not surprising as few islandica knot make it as far south as Portugal and relatively few canutus Knot stop off in the UK in spring and autumn.
Many thanks to Peter Fearon, Carlos Ribeiro and Tiago Rodrigues for photographing this bird and getting the data submitted.
Continue Reading » Knot in odd places… part 2 – The Azores....

My short working description of the purpose of the ringing scheme is ‘Finding out what normal birds normally do rather than what rare birds rarely do’ and similarly most BTO surveys are about ‘what’s there, what’s not there but not what’s rare’.  …

In a change from the usual North Lancs RG blog posts we have a guest blog written by Rose A. Maciewicz & Peter J, Knight about the early results of colour ring sightings of Knot caught near Formby last winter:

Recent reports that NE Greenland was blanketed in snow in the breeding season suggested that 2018 might be a wipe out for Arctic-breeding waders, and this coming after very poor breeding productivity for Red Knot (Calidris canutus islandica) in 2017. The juveniles aren’t due to arrive in the UK just yet, but there may be a glimmer of hope from analyzing the biometrics of colour-ringed adults resighted just after they returned from the north.

On 22nd September 2017 and 30th March 2018 a team including many members of South West Lancs, North Lancs and SCAN Ringing Groups fitted about 1,000 Red Knot with coded orange flags at Altcar Training Camp near Formby, Merseyside and recorded their wing and bill lengths. Since the middle of July we have been observing their return to the beaches around the ringing site. Arrival started on 15th July and numbers grew over the next weeks. By reading the flag codes we could identify which individuals had returned.

Looking at the biometrics of the Red Knot that we read between 22nd and 31st July we were intrigued to see that on average they had statistically longer wing and bill than the whole catch population (see graph). Furthermore, flagged Red Knot that were newly observed on 3rd and 6th August had an average smaller wing and bill than these early arrivals. Since female Red Knot are on average larger than males this is an indication of the females arriving back before the males. As female Knot leave the breeding grounds shortly after the eggs hatch whereas the males remain until the chicks fledge this, in turn, is an indication of probable breeding success.

Time will tell, but maybe our readings of flagged Red Knot offer hope that although NE Greenland had nil productivity, there has been success elsewhere in islandica Red Knot’s breeding range, which extends across Arctic Canada. 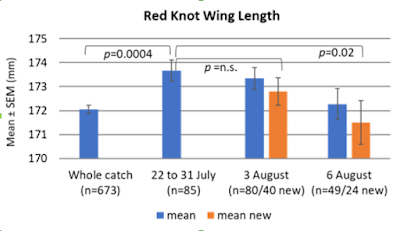 Our analysis of Red Knot arrivals would not have been possible without colour ringing and all colour ring sightings are valuable. Many of these Red Knot were observed in Iceland on their Northwards migration. As such, interesting life histories are building up in a short space of time. If you see a colour ringed bird please report it via www.ring.ac or contact the ringer directly. For waders, the Register of colour-ringing schemes maintained by the International Wader Study Group (IWSG) is a good way to track down the ringer, at the Wader Study Group register.

Continue Reading » Have Arctic-breeding Waders had a poor breeding Season?...

Over the last 16 seasons an account of the Avocets at Leighton Moss has been kept and is available at Jim Shep’s webpage.  The account gives excellent information on how many Avocets have attempted to breed at Leighton over the years and also the …

On the 22nd September 2017 519 Knot were colour ringed at Formby point (see previous posts).  In the first couple of weeks we received about 100 sightings from the local area with good numbers feeding in land at Caldy wildfowl collection.  I …

In the previous blog posting I made reference to an article about Knot at Formby on the 22nd September. Here it is!The West coast of the UK, particularly Liverpool bay and Morecambe bay, are important areas for wintering Knot in the UK.  Additiona…