I was up on north Lincs this morning and due to the lovely weather, thought I’d have a shot at getting some nice photos of the Slavonian Grebe wintering on Cleethorpes Country Park. It did not disappoint in the ten minutes maximum I was there! I’d have…

I will start this off with a little confession. Previously, I’ve neglected Bean Geese for a couple of reasons. Firstly, and most embarrassingly, as I follow BOU rules for species listing, the two ‘races’ of Bean Geese aren’t split so hasn’t seeme…

It’s not everyday an inland White-billed Diver turns up and by no means is it every day one turns up 20 minutes from your house! That’s exactly what happened when this 1st winter bird graced the River Witham just north of Kirkstead Bridge in late-Janau… 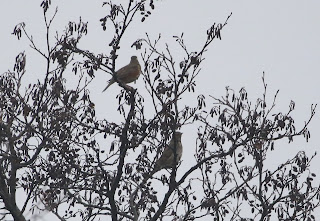 1st winter female Black-throated Thrush (bottom) with Redwing
Wow, I really have neglected this blog since last summer! A lot has happened since my last post including the remarkable invasion of Siberian Accentors into the UK. I was lucky enough to see the Spurn bird on the second the last day of its stay. I went to Scilly again in October and the only really ‘decent’ bird I managed to see was the 1st winter Eastern Yellow Wagtail which basically was a monochrome yellow wagtail and looked and sounded superb. The call was almost tree pipit-esque
Over the winter, there was a wonderful influx of rare birds and several people I know got more lifers in the month of December than any other month last year. I managed to get Dusky Thrush, Red-breasted Goose and Blue Rock Thrush, but one that I just couldn’t find the time or money to go and see was the St. Asaph Black-throated Thrush.
Black-throated Thrush has been high up on my list of birds to see for years and even the ‘dull’ females are charismatic beyond belief. I think it’s the colour grey with a hint of bright yellow at the base of the lower mandible that does it for me! I love a bird with a yellow bill-base.
I thought my luck was up when the St. Asaph bird disappeared, but I got a second chance when Adam Hutt and Heather found a 1stwinter female at Adwick-upon-Dearne in South Yorkshire. I set off early on the second day arriving just after 09:30 having hit some annoying traffic and walked along the river bank not really knowing where I was going. I soon spotted a group of telescopes all watching something and when I worked out where they were looking, I spotted a grey thrush-sized bird at the top of a Hawthorn. It almost immediately flew low into cover and I only managed to imagine what I’d seen. A few seconds later, I got a whistle from Tim Jones who spotted what he assumed was it flying from behind me over my head. As I turned, I heard a Ring Ouzel-like ‘chacking’ and noted a medium-sized all grey thrush. Excellent! It flew over the river and into deep cover. There were lots of Blackbirds and Redwings about all being very vocal and occasionally you could hear the Black-throated Thrush calling. Suddenly, a thrush appeared at the top of an alder with a Redwing and it was immediately obvious it was the Black-throated. It was obviously all grey and the dark streaking on the breast made it look all over dark from a distance. There was an obvious moustachial streak and weak supercillium and through a scope, you could just see the yellow bill base.
It suddenly flew revealing a warm underwing like a Redwing viewed through mist and flew off high towards Adwick. Most people seemed to stay still and didn’t really react at all which surprised me. I headed off down the river until I got to a spot where I could scan and within about 20 seconds I picked up the striking facial pattern of the Black-throated Thrush at the top of a distant tree maybe 1km away. It stayed at the top of this bush for about 3-4 minutes before flying again and perching in a low hawthorn barely visible and then a load of Redwings flushed nearby thanks to a dog walker innocently walking along a footpath, which flushed the Black-throated too.
The views were by no means jaw dropping, but it was great to see in the flesh , hear it call and also note how big it was compared to Redwing. I always assumed they would be larger than that like a big Ring Ouzel.
Continue Reading » Black-throated Thrush – Adwick-upon-Dearne – 16th January 2017...

Another August, another set of pelagics. This year I did 7 pelagics with the first pelagic of the year being a private ‘charter’ for Scott’s stag do, or a ‘Staglagic’. This was without a doubt the best of the 7 and we were lucky to get 22 Cory’s Shearw…

Enjoying the wonderful weather, I headed to Chamber’s Farm Woods in Lincs with the dog looking for Grizzled Skipper, plus the other specialities such as Wood White, Marsh Fritillary and Dingy Skipper. Marsh FritillaryMarsh Fritillarymating Marsh F…

The view south from Hall Hill towards West Keal and part of Lincolnshire Aviation Museum runway at East Kirkby (along with the two biggest bodies of water visible from the patch boundarySpeaking between friends recently, we’ve all adopted inland …

2016 is a new year and I’m in a new location, with hopefully a new job starting very soon. With this in mind, I had to find myself a new patch. There’s plenty of great sites within short driving distance of our new house in south Lincolnshire, such as …

2015, for me was excellent. I got my first job as a post graduate doing what I love and travelling the country seeing areas I would never normally go. With that, I got my own car and therefore my mobility greatly improved, as well as my bank account, w…