We have just returned from a superb two and half weeks in Scotland. A difficult first week camping at Fidden Farm on Mull which ended prematurely when a freak gust took down both our tents (broken poles) We managed to save the holiday from complete disaster when Island Castaways Charity Shop at Craignure came up trumps with a Wynnster Shrike 6 tent for a fiver - which looked almost new when we pitched it in Applecross and began our holiday over in our favourite place on earth! The amazing weather afforded us plenty of opportunities for rock pooling, walking and antler scavenging. It is just the right time of year to find recently shed red deer antlers and we lucked out finding two; though when I held them up to see whether they could be displayed as a pair I was disappointed by the comical effect of one going up and one down -sort of cartoon moose style!! One big stag near the campsite with at least 8 points refused to shed while we were there- he was lucky we didn't sneak up on him in the night to give his beautiful set a few tugs- I'm talking antlers here you understand!! This year we added to our pastimes of wildlife watching and photography by taking a kayak. Lots of fun to be had at Toscaig in millpond conditions. Sadly the plan for us both to go off in it with the dog sitting in the stern didn't work out as she immediately jumped "ship" and ended up sitting on seaweed with lead still attached, barking as we set sail. Eventually I had to be dropped off to care for the salty land lubbin' sea dog while the other salty sea dog, Simon, left for distant shores. At Toscaig we also had terrific otter sightings, some very close but all fascinating in terms of increasing our understanding of their behaviours. The best situation came when we thought the otter had headed holt-wards at end of long few hours hunting. Simon decided to take the mutt out for a much deserved walk along the shore. I stayed on the pier to preview some of my snaps. At one point I took a peek at them through the bins only to recognise our otter pal still snorkelling for crabs in the shallows just ahead of them on the shore line. I watched as man/dog came near otter and as man noticed the otter he stopped and began snapping. The otter then noticed man/dog and decided to take a closer look at them. It was incredible how brave the otter seemed-curiosity triumphing fear. THEN I remembered that this was no ordinary otter, this was almost certainly Conga Killer Otter, from last year!!!! Simon was snapping away happily and I was snapping him snapping and then suddenly the otter was emerging right over Kyra's shoulder. It was incredible and quite hilarious- for about a minute -then I heard a frantic half scream from Simon "Kyra- GET OUT OF THE WATER, GET OUT OF THE WATER NOW!!!!" Once we were all safe and drinking pints of Guinness outside the Inn, looking at the hilarious pictures Simon had taken of the creature from the deeps getting closer and closer to the oblivious idiot Spaniel, it all seemed very funny. BUT- in all seriousness if the otter had decided to take the risk and have a snap at Kyra K- the dog would almost certainly have faired poorly in water against an otter! Great time had by all again. As ever thanks to Judy and all staff at Applecross Inn -always welcoming. A hello to all lovely folks we met too - if you pop by leave us a message- everyone was great fun and a good craic. Enjoy these snaps. As ever clicking on the image gets you a larger version. Pl 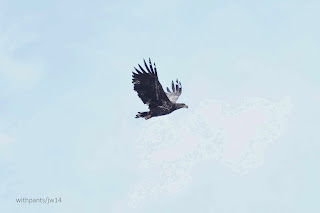 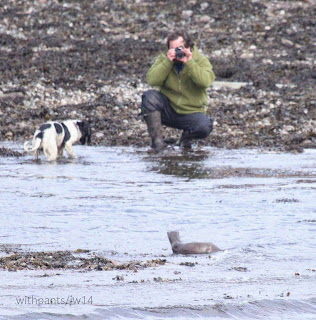 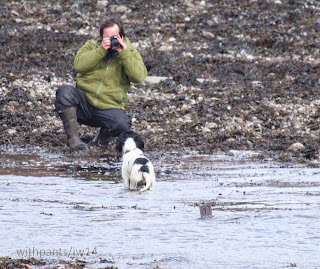 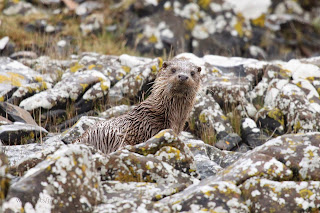 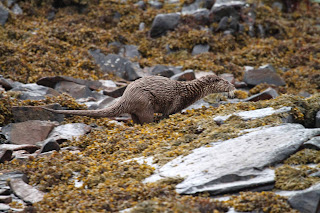 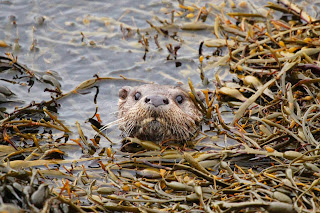 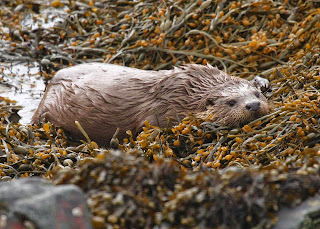 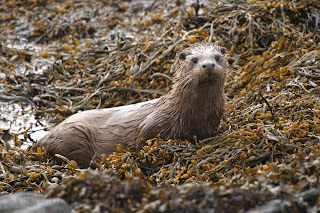 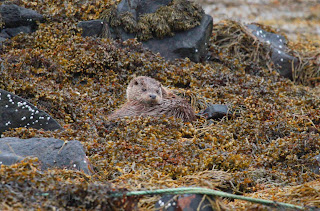 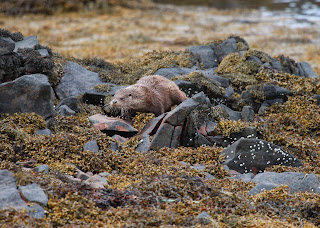 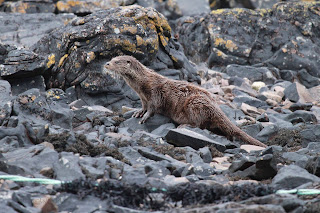 ease don't use our pics without permission- ta xx