I probably don't need to tell you that the weather has been awful just recently, and this has resulted in a lack of posts from me, basically because I haven't been out. It's when we have weather like this, persistent rain for days, that I wish that my patch had a hide overlooking some lovely, muddy freshwater pools. That way, you can spend all day in the hide watching passage waders dropping in on to the lovely mud! That's probably about the only time that I enjoy hides! But, that isn't the case so you just have to make the most of what you've got.

After several days of rain, yesterday dawned fairly bright, 4 oktas cloud cover, with a light west-northwesterly wind. I headed to the Point at the Obs, mainly to watch and record any 'vis' as the high tide wasn't until lunchtime, and as the tides are at the higher end of high, it means that at low water the tide is a long way out. Nevertheless, I did look on the sea as well, but it was pretty dire! 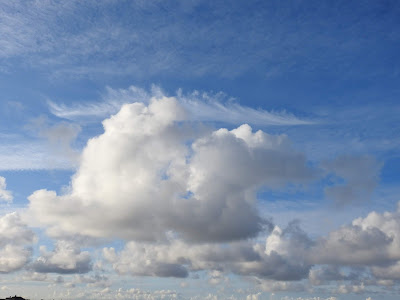 The sky this morning
Along the edge of the golf course, where the path runs from the road to the sea front, is a line of Japanese rose that House Sparrows roost in. Sparrows, both House and Tree, always exit their roost noisily climbing in to the air, circling round several times, and then they fly off in a straight line, heading to wherever it is they are heading! It's as if they are getting their bearings, before they decide where they are going to go. This morning I stopped, stood and watched ten House Sparrows do that very thing; lovely!

I mentioned above that my main aim this morning was to monitor the vis and I was both disappointed and not disappointed at the same time. It was crystal clear this morning, Walney only looked a stones throw away across the Bay, and I could nearly read the time on Barrow's Town Hall clock! Under about 4 oktas of cloud cover, that waxed and waned a bit, there were huge chunks of clear blue sky and this is where the disappointment fits in. Meadow Pipits were on the move, most heading straight south after crossing the Bay, and I suspect they were moving on a broad front. So if you moved a km east or west, you would be recording different birds going over. More often than not I could hear Meadow Pipits, but couldn't see them as they motored through the stratosphere (well, nearly), and when this happens all you can do is record 'a' call as a single bird, when in reality there could be, two, three, eight, fifteen...who knows! So, 150-ish Meadow Pipits south, was a gross underestimate!

Other species on vis included a single Linnet, nine Starlings, four Goldfinches, three Alba Wags, six Reed Buntings, five Swallows, two Grey Wags, three Chaffinches, five Skylarks, 104 Pink-footed Geese and a female Sparrowhawk. The same caveat applies to these species too. Oh, and the direction of movement; anywhere from east round to south to west, and at all points between. 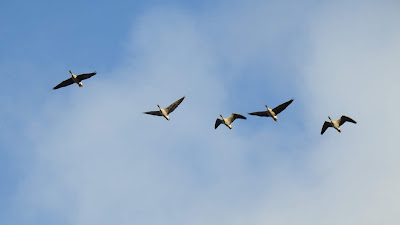 Pink-footed Geese
It didn't feel like a grounded morning, and from a grounded migrant perspective all I had were three Wheatears and a male Stonechat. 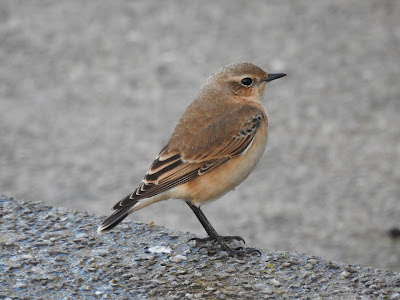 Wheatear
Returning to the sea, I said earlier how dire it was and it has been poor all year, all I had were 19 Cormorants, 22 Eiders, seven Common Scoters and a single Auk sp. I mentioned before how on big tides, the tide is a long way out at low water, and this uncovers feeding areas that aren't normally available to birds. A long way out on some muscle beds that are rarely exposed were a huge number of Gulls, literally thousands, but sadly they were just too far away to go through. As the tide started to run in it lifted the Gulls from the muscle beds and this caused a steady stream west of mainly Herring Gulls with smaller numbers of Lesser Black-backed Gulls, Great Black-backed Gulls and Black-headed Gulls.

Because the tide wasn't concentrating the waders at a roost I had small numbers whizzing about including 165 Oystercatchers and 30 Sanderlings. A Little Egret feeding in a tidal pool and a Rock Pipit on one of the groynes was best of the rest.

There's a slim chance that I might be able to do some ringing in one of the scrubby reedbeds at the Obs tomorrow, so later on in the morning Gail and I went to check the net rides to make sure they weren't flooded after all this rain. Thankfully, they were absolutely fine, not even marginal. So I'll have a detailed look at the various weather forecasts I look at later. We had a Chiffchaff and a Cetti's Warbler in the scrub, and Skylark, Grey Wagtail and Siskin over. On the saltmarsh there was a largish flock of eighty Goldfinches. We'll see what tomorrow brings, if anything!

There's a few Yellow-browed Warblers around at the moment and a few are making it over to this side of the country now, and in fact one was ringed at Middleton NR near Heysham yesterday.

This reminded me of an elusive bird that I had in the Cemetery at the Obs on 1st October 2007. I'd covered a few sites at first light, but there didn't seem to be anything obviously grounded, in fact it was looking more like a vis morning with species such as Fieldfare and Grey Wagtail on the move. It wasn't until 8:00 am that I arrived in the Cemetery. Again it was more of a vis morning with Swallow, Skylark, Chaffinch, Greenfinch, Siskin, Grey Wagtail, Jackdaw and Reed Bunting over in varying numbers, but five Jays over made it seem more interesting! A singing grounded Redwing was a bit more like it and then I heard that loud, strident stsooweest call of a Yellow-browed. I just got on to the bird as it moved and it disappeared into the surrounding gardens never to be see again. In 2007 they were a fair bit scarcer than they are now, but they are still always a pleasure to see. So hopefully we'll have one or two at the Obs later this week! 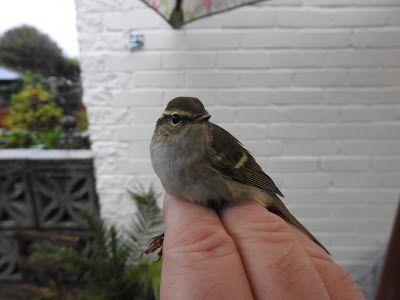 This is a Yellow-browed Warbler that I had the pleasure of ringing in Ian's
migrant magnet of a garden last year!