I currently have a series of wintering bird surveys to do in west Lancashire, and the first one kicked off last Thursday. These are Vantage Point (VP) surveys, and my VP at this particular site when it is a cold northerly, well..., is very cold. The site is on a slight rise, with good 360 degree views (hence the VP location), and is therefore pretty exposed. There are a few hedges, but these have been flailed to within an inch of their lives in the past, and afford little protection from what the good folk of Norfolk call a 'lazy wind'! 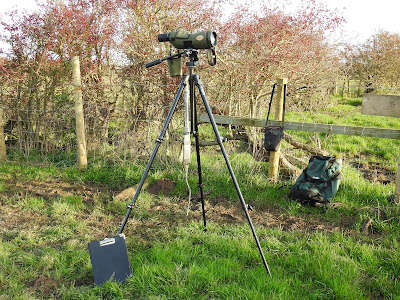 The VP Station
So my survey commenced under 7 oktas cloud cover with a biting NNE wind. There were a number of Pink-footed Geese on the move, all mainly moving in a southerly direction, and I had 545 in total. 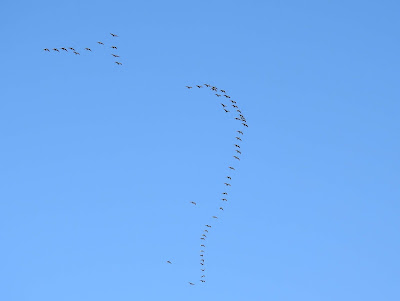 Pink-footed Geese
Thrushes were a feature of the morning too, with a movement of 36 Redwings, 94 Fieldfares and a couple of Song Thrushes. Skylarks were also moving and I had ten head south.

When I was scanning some distant Pink-footed Geese with my scope, I picked up a closer Great Egret that was probably heading towards some feeding grounds. Little Egrets still turn my head, so a Great Egret turns it even more!

I learned something today about Jay calls, that I didn't know before. I was stood with ears and eyes skywards, merrily counting and plotting species and flight directions on my maps, when I heard what I thought was a Buzzard. The mew call was loud and close, so I grabbed my camera thinking that I am going to get stonking views of a low-flying Buzzard in a minute, and out pops a Jay! A quick bit of research later in the 'Collins Bird Guide' and under Jay it states "sometimes gives a descending mew, 'piyeh', very like Buzzard's". I never knew that, and felt a bit daft that I didn't know that. I can't tell you how many Jays I've heard over the years, but all I have ever heard is their loud, harsh 'kschaach' call. You learn something new every day!

Talking of real Buzzards, I had three, and other raptors were a Kestrel and immature male Sparrowhawk. Seven Long-tailed Tits are also worth mentioning.

I was back at the same site the following day for another four hours in the cold, and I had 2 oktas cloud cover and it was less windy, making it feel less cold over all. Tree Sparrow was an addition to yesterday's species, and I only had single figures of Fieldfare and Redwing, but three Mistle Thrushes were also new in.

I had two Sparrowhawks, two Kestrels and five Buzzards this morning and the Great Egret was replaced by a Little Egret. Long-tailed Tits now numbered 25 (two different flocks) and it was a pleasure, as always, to record a Raven.

Weekend found Gail and I helping to plant trees at the Nature Park, and between about ten of us we planted 200 trees provided by the Woodland Trust. We selected the location carefully for the trees, in area that was sheltered and also wouldn't impact on the pool by creating a displacement effect. 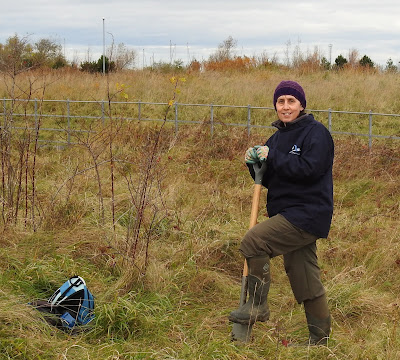 Gail doing a bit of tree planting
Fingers crossed for some decent weather this weekend so we can see what's using our new now operational feeding station in the Hodder Valley.