Over the past week we've had a number of frosty mornings, which has lead to some glorious weather to be out and about in. I apologise for a lack of Blog postings (again) over the last week - ten days, but I have been a busy, busy boy! It's been outdoors/bird related so I can't complain too much, if at all!

I had my good friend George from Northumberland staying with me for a couple of days last week and on Friday morning we managed to get out for a couple of hours birding on the estuary. And guess what, it was a frosty morning. Walking down to the estuary we had a Kingfisher zip past us along the ditch that runs along the side of the path. After it had streaked past, leaving a smudge of aquamarine etched on our retinas, I thought the ditch isn't particularly great looking, but the Kingfisher knows what it's looking for more than I do.

We had a Fox that looked resplendent in the field to the north of the long hedgerow, with it's rusty coat reflecting the early morning rays of the sun and looking a fiery red, contrasting with the monochrome frost coating the grass with light reflecting crystals.

Crossing the old railway line a number of Blackbirds and Redwings feasted on Hawthorn berries, and there was some more of that 'red and frost' contrast going on with the Redwings.

Out on the saltmarsh and estuary the usual suspects were there, with several Rock Pipits calling as we walked to the point to have a look through the waders and wildfowl. The bulk of these were Teal, Wigeon, Pink-footed Geese and Redshanks, but a Spotted Redshank out on the mud was a nice addition for the notebook. 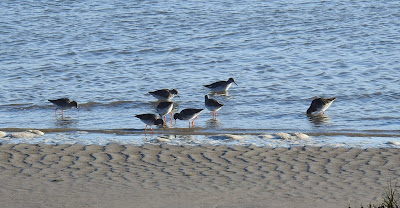 Redshanks
The tide was running in, so we headed round to the quay to see if there were any Black-tailed Godwits feeding on the last remaining mud before the tide covered it, and we weren't disappointed as 56 frantically probed the mud, calling contentedly.

Saturday dawned frosty again and Gail and I headed to a site in the Hodder Valley in Bowland, where the landowner, Simon, had set up a feeding station for us. It was in an area of semi-mature woodland, an arboretum in fact planted some 25 years ago. This was our first ringing session there, and a bit of a tester to see if it would be worthwhile. We expected to ring a number of Tit species, and we weren't wrong, but a few other species made us think that it is worth persevering with. We ringed 28 birds as follows: 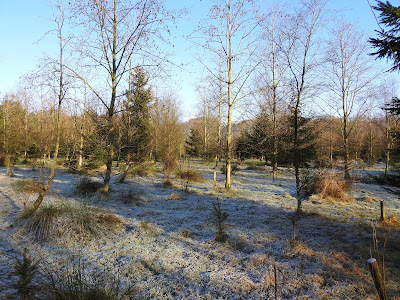 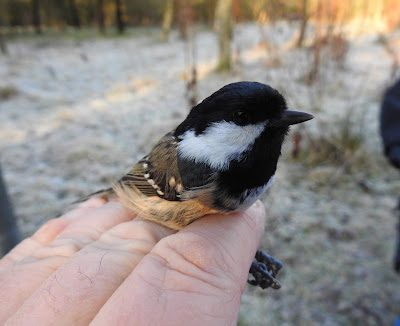 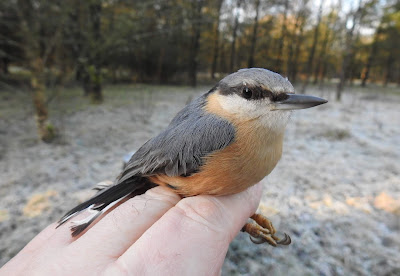 Nuthatch
There were a number of Siskins criss-crossing the woodland at tree top height, perhaps about 30 or so, and they totally ignored the feeders feeding on Birch and Alder catkins. Other finches in the woodland included two Lesser Redpolls and at least three Chaffinches. A calling Tawny Owl and a handful of Jays, Fieldfares and Redwings also made it into my notebook, but that was it.

Earlier this week, on another frosty morning, I had the first of a series of wintering bird surveys that I have to complete not too far from the historic town of Berwick-upon-Tweed in Northumberland. Whilst I was at my first VP I had the feeling that somebody was watching me, and not from the nearby coastal cottages, but from out on the river, and there was an Atlantic Grey Seal bobbing up and down in the water keeping a careful eye on me. 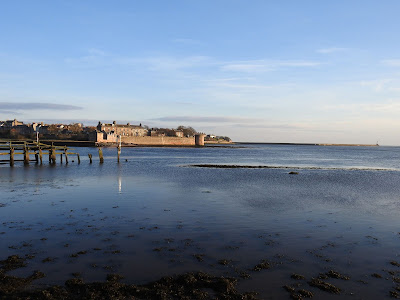 Some views of Berwick, above & below 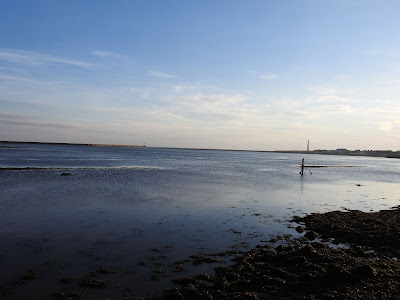 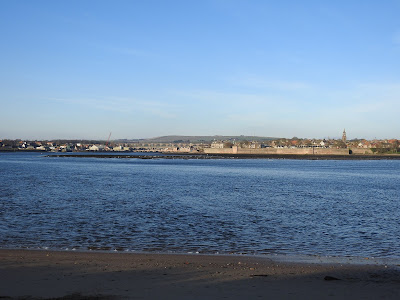 A few Rock Pipits fed along the shore and on the river were Goldeneye, two male Goosanders and a Red-throated Diver that too was keeping an eye on me. In fact in one of the shots below you can see it angling it's head to look at me. A number of waders were feeding out on the mud before the tide ran in and the two most numerous species were 61 Curlews and 99 Redshanks. 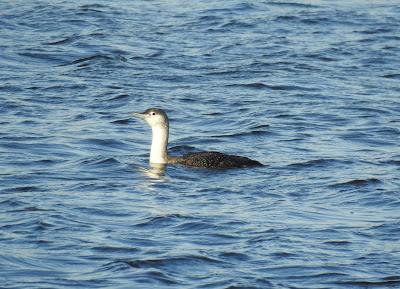 Red-throated Diver
The last of my frosty mornings was mid-week at my winter bird survey in the west of my home county. The major upset for me of the morning was a cold flask of coffee! When I was making my flask at home before setting out, I heated the milk but forgot to boil the kettle! Imagine my disappointment when I poured my first cup!

Thrushes were the order of the morning and I recorded 147 Fieldfares and 41 Redwings heading in all sorts of directions, calling, not calling, dropping into berry laden Hawthorns and just perched up looking stunning in the watery December sunshine. 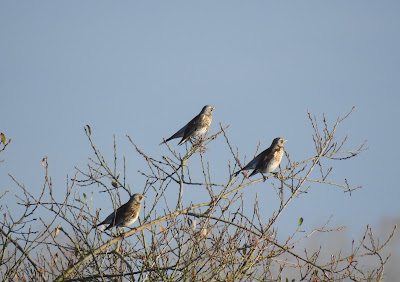 Fieldfares
One of the most enjoyable moments of the morning was the antics of a young male Sparrowhawk. From my vantage point I caught sight of the Sparrowhawk working the hedges immediately north of where I was standing. He flew along the front of the hedge in the field opposite me, just inches from the ground, all the time 'flicking' in and out of the hedge. When he got to the end of that length of hedge, he could either flick over the hedge and carry on, or turn right at the ninety degree junction of hedges. Luckily for me he turned right and carried along this shorter length of hedge doing just the same as before. He was like a shadow flickering amongst the thorny limbs of the Hawthorn, and you were never quite sure whether he was indeed just shadow, or real.

It was then that I realised that when he got to the end of this short length of hedge he would turn right again and come along the hedge that I was standing sort of within, and behind, and he did!

He came along 'my hedge' and flicked through a gap where I was standing. passing me by just a few feet. At this point I came out with a good old Anglo-Saxon expletive in my head! He then shot across a short open area of field and carried on past the pond, and on to haunt some more hedges. Stunning!

After that everything else seemed fairly mundane, just a couple of Jays, a Great Spotted Woodpecker, a Raven, a female Sparrowhawk (perhaps his mother or sister), two Kestrels, three Buzzards, eight Curlews and 24 Collared Doves. Hang on, 24 Collared Doves! On some telegraph lines I could see some pigeons/doves perched up and on jizz I thought they looked remarkably like Collared Doves, so to be certain I trained my telescope on them and indeed they were! This is probably the largest flock of Collared Doves I have had for some time. And when I put my thinking cap on, it dawns on me that over the last few years I am seeing less and less Collared Doves, but nobody seems to talk about it. I suppose birders who are driven by listing just like to get them on their year list in early Jan, and never look at them again for the rest of the year, but that's another story!