There’s no local news today. I’m not getting out birding and unlikely to do so whilst this foul weather hangs around. Instead I robbed the archives from a winter holiday that Sue and I took to sunny Lanzarote, the Canary Islands almost five years ago.
Lanzarote is well known as a fairly windy island. Part of the reason the climate is so good is because of the Atlantic wind which blows there on most days; without it temperatures would be much higher and the island would effectively become a desert, like the nearby Sahara, 125 kms away. Maybe it was the Sahara dust, the fluctuations in the daily temperatures caused by the winds or some other factor, we don’t know. But we always came home with the Lanzarote Sniffles or a full blown cold.
In 1993, the island of Lanzarote was declared a Biosphere Reserve as it conserves one of the most exceptional ecosystems and volcanic landscapes in the archipelago. Lanzarote was born through fiery eruptions; the solidified lava streams and extravagant rock formations bear witness to that.
The island along with others in the Canary Islands emerged about 15 million years ago after the breakup of the African and the American continental plates. The greatest recorded eruptions occurred between 1730 and 1736 in the area now designated Timanfaya National Park. This is an area where most tourists head to in order to see the spectacular displays of cold water poured onto the ground turning immediately to a spout of steam. As we drive along stopping here and there to explore it is impossible to pause without taking pictures of the dramatic and often deserted landscapes. 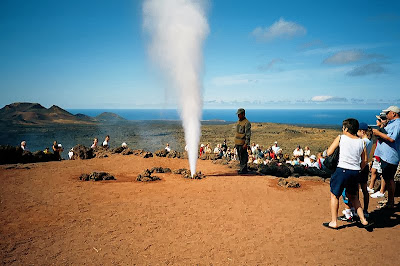 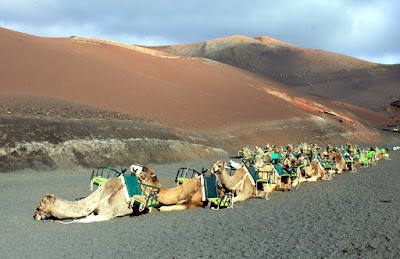 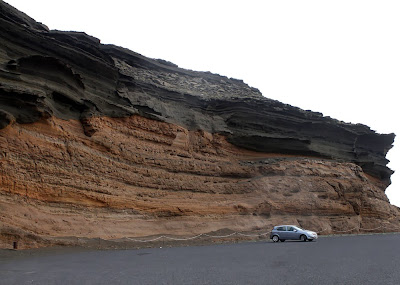 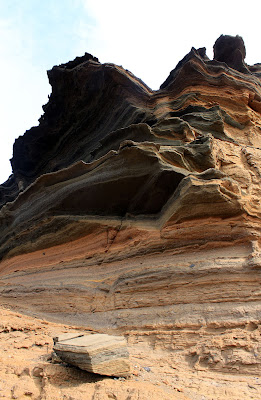 Lanzarote
The number of bird species is quite low in Lanzarote, even more so during the winter, so anyone arriving here expecting to add a few dozen new species to their list might be sorely disappointed.
The tiny Berthelot’s Pipit is endemic to the Canary Islands and is very common on Lanzarote, almost impossible to miss until its grey-toned plumage melts into the rocky backdrops. 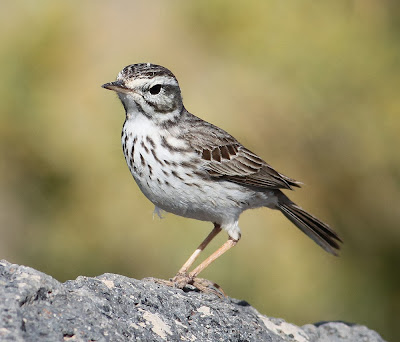 Berthelot's Pipit
The common gull around here is the magnificent Yellow-legged Gull, looking all the more stunning against the volcanic shorelines. 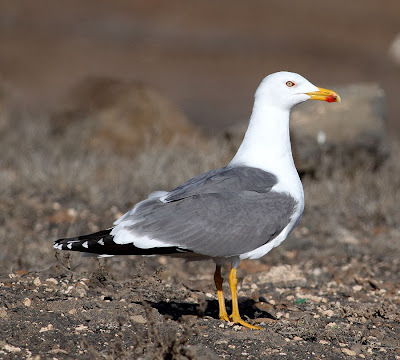 Yellow-legged Gull
The vineyards of La Gería with their traditional methods of cultivation, are a protected area. Single vines are planted in pits 4–5 m wide and 2–3 m deep, with small stone walls around each pit. This agricultural technique is designed to harvest rainfall and overnight dew and to protect the plants from the winds. The vineyards are part of the World Heritage Site as well as other sites on the island. 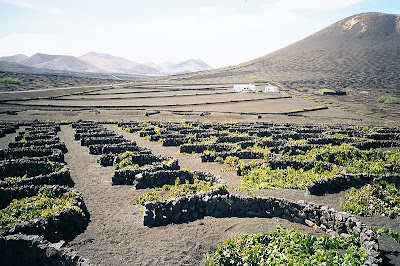 La Geria, Lanzarote
We always planned at least a couple of visits to the salt pans and tidal lagoons at Janubio in the south west of the island where we hoped for a good variety of very common waders. Almost guaranteed here are scarce UK birds like Black-winged Stilt and Kentish Plover mixed in with the everyday Ringed Plover, Little Ringed Plover, Dunlin, Redshank, Greenshank and Grey Plover of home. 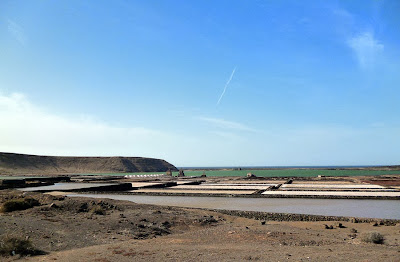 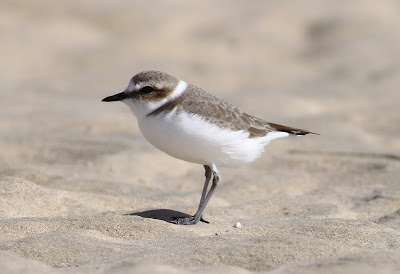 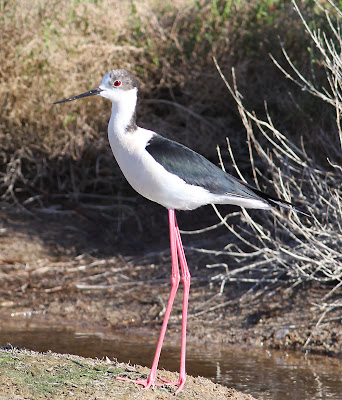 Black-winged Stilt
We always stayed at Hotel Costa Calero where along the nearby beach and rocky shore were found Common Sandpiper, Turnstone, Sanderling, Whimbrel, and a steady stream of Sandwich Terns fishing the clear waters. 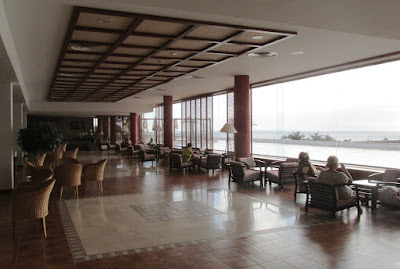 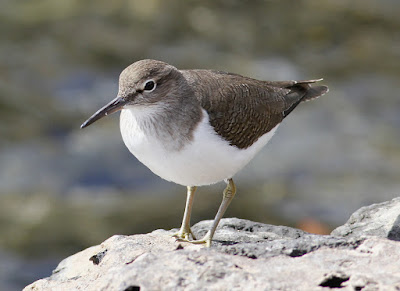 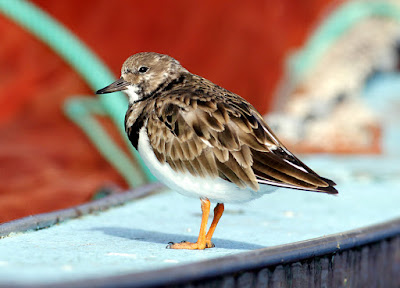 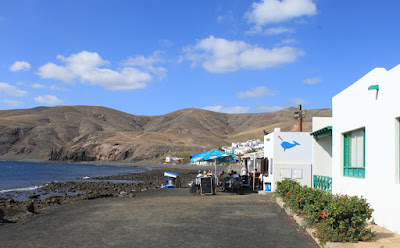 Near Calero
Near the hotel were residential streets with large gardens and decent amounts of shrubbery with common birds like Collared Dove, Chiffchaff, House Sparrow and Desert Grey Shrike. The shrike, part of the "Grey" shrike complex and formerly known as Southern Grey Shrike, is now considered to one of the several sub-species of  Lanius elegans, the North African Desert Grey Shrike. 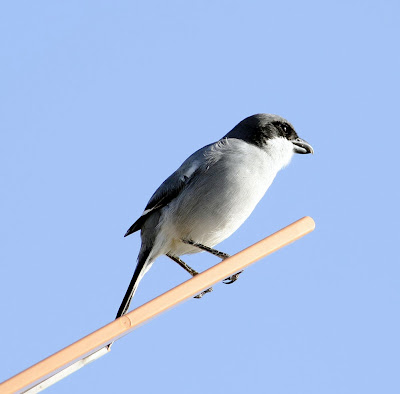 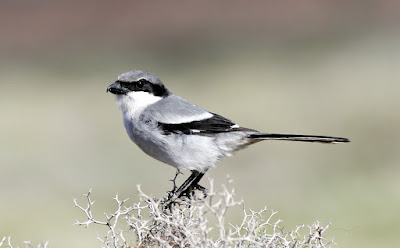 Desert Grey Shrike
Where avenues petered out into the typical dusty, dry Lanzarote landscape Linnets and Berthelot’s Pipits appeared, and with luck, a few Trumpeter Finches or Lesser Short-toed Larks. The related Short-toed Lark (the one with the unstreaked breast) is but a rare visitor to Lanzarote. 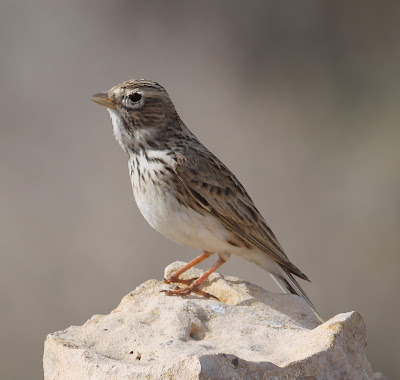 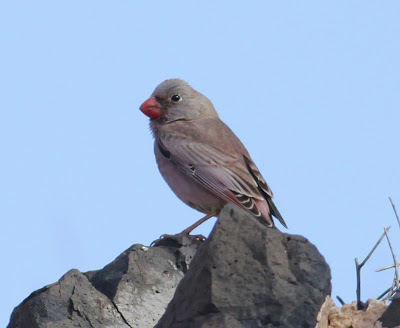 Trumpeter Finch
Sunny wind free days were spent looking on the plains in the area of El Jable and Teguise for Houbara Bustard and Cream-coloured Courser, never easy to find but two of the real speciality birds of Lanzarote. 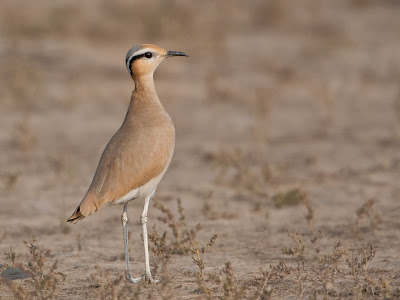 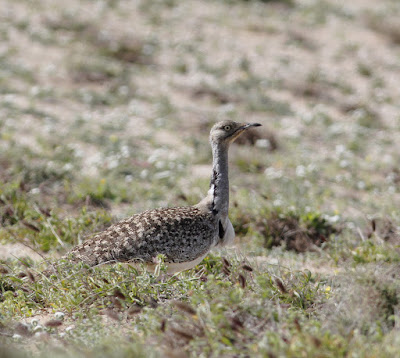 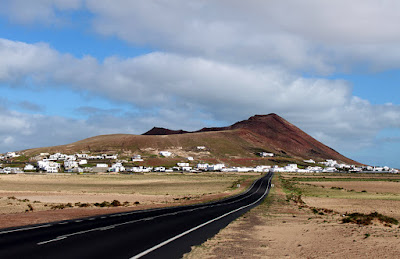 Near El Jable
The Alfa didn't drive nearly as good as it looked. A sluggish, noisy and polluting diesel engine. 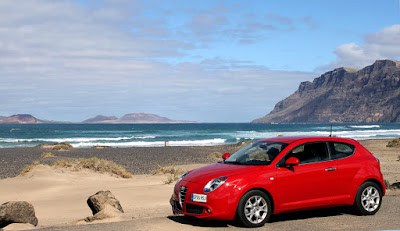 Alfa Romeo
It's looking like Tuesday before the weather here improves enough for birding or ringing.
Meanwhile, over at Gulf Lane a Linnet flock has numbered anywhere between 120-200 birds. Andy and I cut a square of vegetation down to soil in readiness for a session with a whoosh net. All we need now is for a half decent morning to have a crack.
Linking today to Anni's birding blog and Eileen's Saturday Creatures.