Definitely not routine in a boring way, but a wander on Monday around the Lune Estuary before Christmas, started by finding Conder Pool having just five birds present, 2 Magpie, a Goosander, a Grey Heron, and the semi-resident Lesser Black-backed Gull. Oh yes, and a lone Redwing on the berries. In the creeks, 7 Little Grebe included five down the channel almost out of sight towards the Conder mouth, 82 Mallard and up to 120 Teal were also noted in the creeks.
At Glasson Dock, estimates on the Lune Estuary, 2,500 Golden Plover, 850 Black-tailed Godwit, 550 Common Gull, 350 Dunlin, 120 Redshank, 75 Curlew, and the lone Bar-tailed Godwit seen last Thursday.

The sole purpose of a brief visit to Cockersand on Monday, was to find the Stonechats either at the Caravan Park/Lighthouse Cottage or both, which unfortunately ended in failure, but it was interesting to see the report at Fylde Bird Club, of a pair of Stonechat on Monday in the field by the church at Cockerham.
At least 350 Curlew seen at the Cocker Estuary, and c.150 Whooper Swan in the field to the north behind the Caravan Park were seen as a number which looked reduced by something like 100 here for several weeks. At Clarkson's Farm, 3 Bewick's Swan were with 28 Whooper Swan. 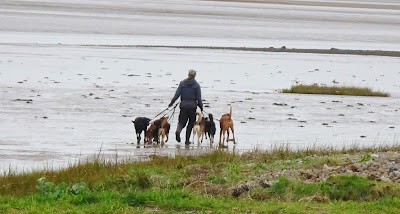 Still at it at Cockersand, seven at a time. Clik the pik and see.