Tuesday morning - New Year’s Eve. There was a thin layer of frost on the windscreen but it soon cleared once the heated screen kicked in. On Monday evening Andy had convinced me we should have another go at the Linnets at Gulf Lane despite the little monkeys playing hard to get by refusing our bait for several weeks.
Fifteen minutes later I’d parked at the gate to see Andy already striding out over the field towards Linnet Square. It was 0800, zero degrees, zero wind and clear skies. Perfect. 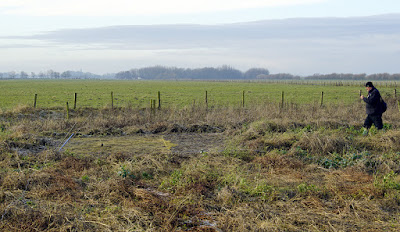 Linnet Square
We set the whoosh net, added a single shelf mist net along Linnet Road, crossed our fingers and then sat waiting in the car supping a coffee to warm icy fingers. At last, we caught a few - 13 birds - 12 Linnets (10 first winter males, 2 first winter females) and a single adult male Chaffinch. 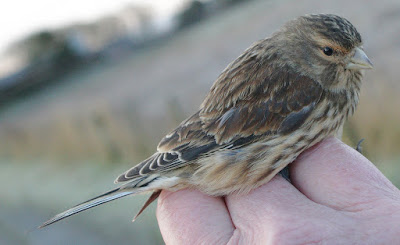 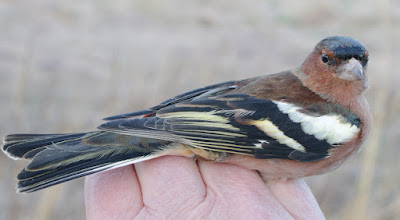 Linnet
Continuous counts and observation throughout the morning saw about 150 very mobile Linnets. They are so flighty, easily startled and reluctant to settle that they seem to use an awful lot of energy simply airborne, going round and around. The busy roadside plot means that whenever a largish vehicle passes, e.g. a tractor, large van or vehicle + trailer, the whole flock takes flight yet again.
The autumn/winter totals here at year end stand at 40 Linnet, 1 Dunnock, 1 Chaffinch, 1 Goldfinch and 1 Reed Bunting.
This is somewhat disappointing as it means we have been unable to continue investigating “the Scottish connection” due to not catching more Linnets from Scotland and vice-versa, Scottish ringers catching Linnets ringed here at Pilling. But fingers crossed again that a couple more successful visits could increase the data we collect while putting more ringed Linnets into circulation for the coming spring and summer.
In previous winters we considered that a number of the Scottish Linnets we catch have belonged to the sub-species Linaria cannabina autochthona because of their size and colouration. This now seems unlikely since correspondence and further investigation suggest that autochthona (Clancey, 1946) may not exist as a subspecies and that the sometimes substantial variation in a number of the Linnets we catch is due to clinal variation only of Linaria cannabina.
This is a subject worthy of complete investigation by an ornithologist with the time, determination and due diligence to invest in a single project. Value added birding perhaps?
It’s my New Year Resolution too. Try and add a little value to my own birding expeditions.
As we approach January 1st the airwaves and Internet buzz with messages about target species for the Big Day and New Year Listers.
You know the type. Four up cars loaded with scopes, bins and cameras and a list of places and birds scrawled on the back of fag packets or loaded on the Smartphone. Birds already identified and confirmed for them. Bang, slam, chatter, chatter, tick, tick, bang, slam and off they go to the next one on the list at the following hot-spot rather than spending additional time in the same place. Here  they might have to look at common birds or find a bird of their own. And heaven forbid, learn about species, their life histories, their migration, where birds fit into the bigger picture of avifauna or the world at large.
Isn’t that what birding is all about?
Cambridge Dictionary - “Bird-watching is the activity of watching and studying wild birds in their natural surroundings, unlike ornithology - engaging in the study of birds using more formal scientific methods."
Two rants this week. I think that’s the histrionics over for a while. Honest.