We all like a bargain don’t we? I may have found one when Silver Surfing the other day; it was a pair of Celestron Granite 10x42 binoculars for £199.99, free postage.
I have been looking for a pair of inexpensive bins I could leave in the car at all times to lessen the chances of heading out birding and then at the crucial moment realising bins had been left at home. Old Age coupled with being none the wiser is a terrible handicap.
I knew the Granite range of binoculars was a few years old but that didn’t worry me too much if the price and quality worked OK.  A search of Internet reviews and You Tube showed that the marque and 10x42 HD model was top of the range and well received when first introduced. The ones found on the Internet had just a few years ago retailed at around £400 but had now been superseded by newer but not necessarily better models. 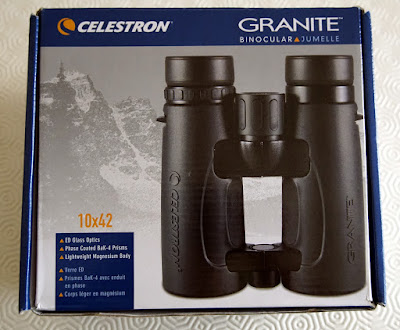 Celestron 10x42 ED
Celestron is a company based in California that manufactures telescopes and distributes telescopes, binoculars, spotting scopes, microscopes, and accessories manufactured by its parent company, the Synta Technology Corporation of Taiwan.
Therefore, no illusions, my new binoculars are probably manufactured somewhere in China, not uncommon for much of the current generation of birding optics, and a way for large companies to increase profits.
A search via Google for “birding optics China” brings up names like Zeiss, Nikon, Bushnell, Kowa, Vortex and RSPB. The internet also tells how some Leica binoculars are made in Portugal and have been for many years. Portugal is a country usually associated with producing top quality wines and corks that seal the bottles rather than the manufacture of optics.
There’s no real reason why in 2020 Chinese and other manufacturing countries cannot make quality optics that were once produced by well-known German and Japanese names. There are many high quality products made in China these days - the world has moved on.
Meanwhile "made in" labelling is an absolute minefield as "Made in Germany" or "Made in Japan” could mean performing the final operation in Germany/Japan for a product actually made in another continent. This could be as simple as sticking on the "made in" label, attaching straps, packaging, or any other number of minor jobs. Zeiss Conquest and Zeiss Terra models fall under this category with a design sourced from Kamakura, Japan. Kamakura has some manufacturing capacity in mainland China, and may source components, or even assemblies from local producers there.
So, what of my pristine bins when I opened the box and then tested them out? 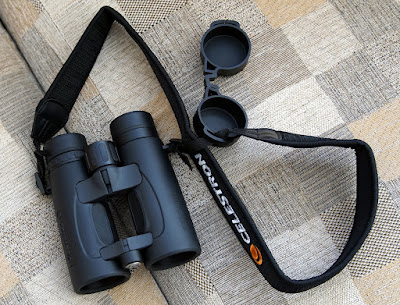 Celestron Granite 10x42 ED
Like most roof prism binoculars these days, they are fully sealed and nitrogen-purged to be waterproof, dust proof and internally fog proof. As the ED label implies, Granite binoculars are made with high-density, Extra-low Dispersion glass and BaK4 prisms with high-reflective coatings which are said to improve image clarity and throughput and to provide major performance enhancements relative to cheaper glass.
Close focusing seems good at less than 7ft with a field of view that the makers claim is 340ft but which I am unable to test just yet. These new bins weigh in at an acceptable 26 ounces and stand at a very compact 5.8 inches tall and 4.5 inches wide, dimensions almost identical to my other pair of bins, 10x42 Vortex Vipers. I especially like the open-bridge design that allows a user to hold the binoculars more securely than the traditional joined double barrel format.
The Granites are covered in smooth matt black rubber armouring free of any texturing. Shallow thumb grooves on the underside of the barrels increase the comfort of the grip overall. The metal eyecups adjust with a standard helical-twist mechanism, with one stable intermediate position between fully in and fully out. The action is smooth and fairly precise; likewise the focus mechanism that turned smoothly straight out of the box.
The dioptre adjustment is a simple twist ring beneath the right ocular lens. A raised vertical dash on the ring lines up with a triangular mark on the armouring of the barrel to denote the position for equal eyes, with minus and plus signs on either side to indicate the direction of adjustment. The mechanism does not lock, and there are no markings to indicate positioning away from the equal position, though there are other positions using the raised oval markings on the twist ring. This is a typical basic dioptre adjustment mechanism, and one that once set, rarely needs further changes.
The box contains the expected top and bottom lens covers to guard against rain, dust and misuse. Misuse perhaps of those birders who leave binoculars bouncing around the foot well of their car?
Celestron did a good job with the straps. In addition to a standard neck strap, which is pretty comfortable, Celestron also provides a harness strap, but it’s not something I will use. There's a soft carrying case made of rubber-coated fabric which provides padding to protect the optics. The lid closes with a pressure-opening clasp. There is also an outer pouch for lens cleaning tools or whatever. A good, simple and functional case. 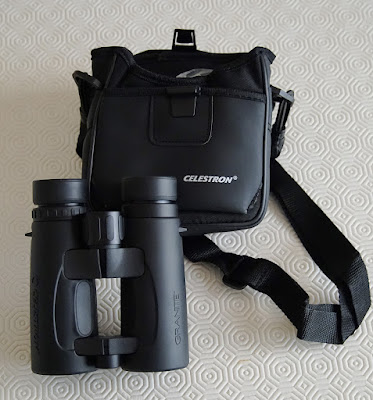 Celestron Granite 10x42 ED
All in all, I like these Granites a lot. They offer a great level of optical quality and usability for £200. They continue the trend of making high-quality glass available to those who don’t have £thousands to spend on binoculars. Anyone in the market for a low-cost birding glass, should consider snapping up one of these bargains while they are still available for around £200.
I just looked again on the Internet where I found just one supplier still offering the same 10x42 model at £199.99. Amazon came in at £240, a number of outlets wanted £299 and one asked £310.00.
Alternatively, for badge freaks top of the range 10x42 binoculars from Swarovski, Zeiss and Leica bins all retail around the £1900 mark.
Linking today to Anni's Birding and Eileen's Viewing Nature.