The release of non-native game birds and their impact upon the environment is in the news again this week. It is an issue mentioned several time on Another Bird Blog with the intention of alerting Joe Public to elements of the countryside that David Attenborough does not show.
An estimated 40/50 million Common Pheasants and up to 10 million Red-legged Partridges are released into the countryside prior to the shooting season opening each 1 October. 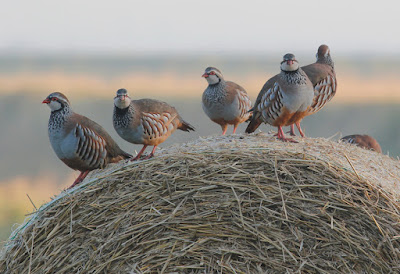 Pheasant
The current pheasant and partridge shooting seasons draw to a close at the end of January 2020. The 2020 season opens on 1 October for Common Pheasant and 1 September for Red-legged Partridge. Releases of captive-bred birds occur prior to this, usually in July when trailer loads of pen-reared game-birds are transported to the shooting fields and released. Being pen-reared and regularly fed from leaving the egg the youngsters find most of their food from bins spaced at regular intervals throughout each shoot. 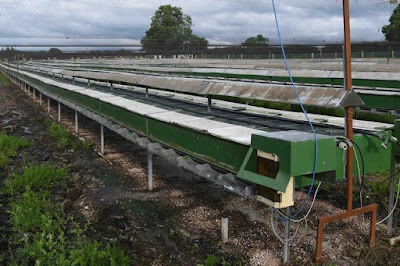 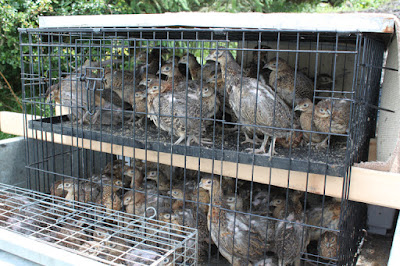 Off To The Shoot - Raptor Persecution Scotland 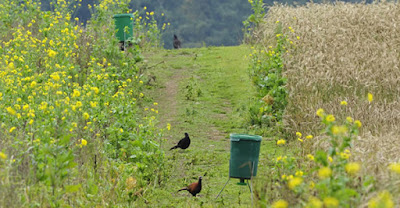 Feed Bin
The waste from transportation and feed bins provides rich pickings for predators of the crow family, mainly Carrion Crows. This easy availability of food throughout the winter months may have been a factor in the crows’ increased population since the 1960s, a trend associated with increases in nesting success/earlier laying.
Carrion Crows take nestlings of small farmland birds and the eggs & chicks of waders, a fact of life easily witnessed by field workers. Some studies have found that crows along with their cousins the Magpie and the Raven have surprisingly little impact on the abundance of other bird species. I’m pretty certain those studies have not taken place in the Fylde Lancashire where it is not uncommon to see many hundreds of Carrion Crows on fields that are regularly shot and where lines of feed bins cross the landscape. 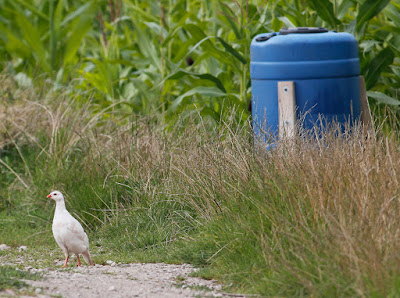 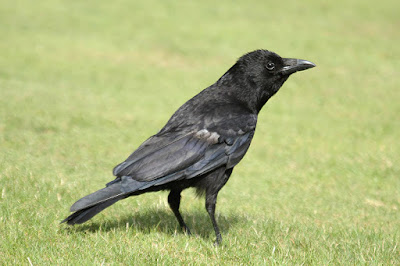 Carrion Crow
Around 60% of game-birds released for shooting in the UK, an estimated 25/30 million birds, do not end up at their intended fate of being shot. This constitutes wastage, raising economic, environmental and ethical questions. There are four main reasons: predation, disease, starvation and dispersal into the wider countryside. Roadkill and agricultural operations contribute yet more often unquantifiable deaths. Early morning drives through areas of shoots will see many fresh corpses on carriageways where inexperienced and newly released game-birds meet the combustion engine. 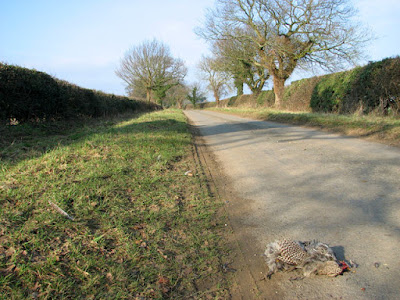 Pheasant Roadkill
The National Gamebag Census (NGC) records information provided by around 600 participating estates throughout Britain on shooting bags. There is no actual quantification of releasing as the NGC is a fraction of the actual shoots, many of which are on a small scale basis of individual and/or neighbouring farms. This I know because there are a number in this part of Lancashire and where gamekeepers are reluctant or evasive in revealing the number of game birds they “put down” (release).
From "Birdwatch" magazine 21 January 2020.
The non-profit legal entity Wild Justice revealed this week that it has sent a second letter to The Department for Environment Food & Rural Affairs (DEFRA) about the effect of releasing millions of non-native game-birds into the British countryside.
Last July Wild Justice challenged DEFRA's failure to assess the ecological impact on sites of conservation interest of releasing approximately 50 million game-birds into the countryside. The government department took two months to respond, but agreed that the Secretary of State would undertake a review of the release of such birds on or near protected sites.
Since July 2019 DEFRA has failed to act. With zero progress, Wild Justice pursued the challenge and wrote again urging DEFRA to act quickly.
In the letter, Wild Justice's lawyers Leigh Day stated that, with DEFRA having recognised the problem in September 2019, "it would be unlawful for those releases to take place in 2020 unless the possibility of them having detrimental impacts on the sites in question had been properly considered and specifically ruled out ahead of time".  As such, "the Secretary of State needs to initiate those processes now". The lawyers added: "To hold off doing that would lead to illegality later and so be unlawful now."
Mark Avery, a co-director of Wild Justice columnist, commented: "We started this legal challenge last July, DEFRA took two months to respond (mid-September) and now we are past mid-January, only six months from the time when game-bird releasing might start again. DEFRA needs to get moving. This legal letter is designed to give them a very firm shove."
It’s good news that Wild Justice should tackle this subject but I question their limiting the campaign to “sites of conservation interest”. The release of non-native game-birds is a problem that impacts the whole of the countryside, all of which is of conservation interest given the catastrophic decline of so many birds of farm and field during the last 40 years.
Linking this post to Eileen's Blogspot and Anni's Birding.