The birds made a return to Heysham 14 days ago, when 26 Brent Geese made an appearance there on 13 January, since then numbers have fluctuated slightly. But yesterday saw an all time peak number at Heysham.

When I pulled up on Knowleys Road at Heysham yesterday morning, the birds I was looking for were immediately seen from the car. I shot off down to the promenade for excellent views from the children's play area on a fine clear morning, to find an all time peak count of 72 Pale-bellied Brent Geese, including two Canadian ringed birds.
VIEW FULL SCREEN
At 10.50 the geese took off and flew south. Taking a guess they would follow a pattern and go to Red Nab, I followed them, but no sign when I arrived there. The next guess was the bay at Ocean Edge, and that turned out to be correct, it had been the pattern for them previously, they were still there when I left at 12.00pm. 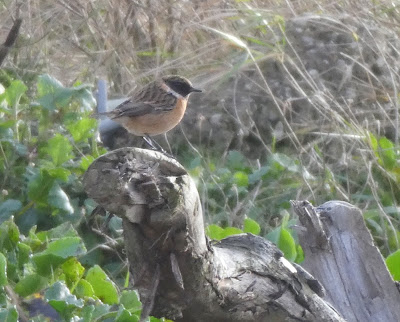 Stonechat Ocean Edge 27 January. Malcolm Downham.
There was a bonus bird present at Ocean Edge, with a 1st winter male Stonechat seen. Thanks for the image Malcolm, I never refuse a Stonechat on Birds2blog.
I decided to take a look at Cockersand, and calling in at Conder Green on the way, I noted 3 Goosander on the pool, and a lone Little Grebe holding the fort at high tide over the creeks. There are currently in excess of 300 Whooper Swan at Cockersand, 2 Black Swan were with the bulk of the herd in the field behind the Caravan Park, with two smaller groups in fields by Slack Lane and Moss Lane.
Lower numbers of waders than of late seen in fields were, 250 Golden Plover, 165 Black-tailed Godwit, and 155 Curlew, 15 Meadow Pipit dropped and disappeared into the grass, and c.450 Pink-footed Geese seen in the air from here were over Glasson Dock.