Keen as mustard, I was off to Heysham on Thursday to keep myself up to date on the phenomenon that is 'The Heysham Brents'.

I was at Heysham a good three hours before high tide, to find 60 Pale-bellied Brent Geese and a single Dark-bellied Brent Goose feeding on the exposed skears as viewed from the promenade by the children's play area. Watching the geese as the tide flowed in, their food source eventually became submerged and the geese drifted on the tide towards Heysham Head before lifting off the sea at 12.50pm to fly south. 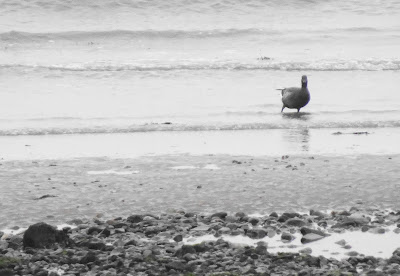 Dark-bellied Brent Goose Heysham 30 Jan Pete Woodruff
Underexposed and looks darker than it really is. A record shot of the DBBG....Clik the pik
Sending MD a text to tell him they were on their way, I got a reply a little later to say he was at Red Nab watching the geese in the hope two birds ringed in Canada would reveal their marks, and to tell me the earlier 61 birds had been joined by two more. We enjoyed excellent close views of the geese at Red Nab until they all took off at 1.40pm and flew further south, presumably to Potts Corner were they had gone on Tuesday.

The video is of the Brent Geese at Red Nab. One of the Canadian ringed birds can be seen coming into view near the end of the video, it's the second of two birds seen standing on a rock before going left into the sea.

The Leadhills Estate in Lanarkshire has lost its appeal against a General Licence restriction, imposed on the estate last November, after 'clear evidence of wildlife crimes' was found on the grouse moor here. The alleged offences of shot or trapped included, 3 Hen Harrier, 2 Buzzard, and a Short-eared Owl. 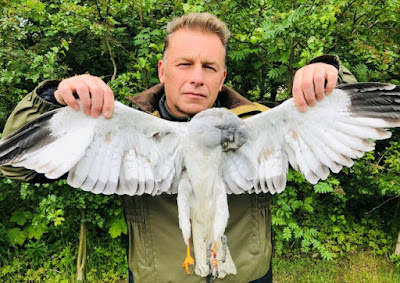 Photo Ruth Tingay
This male Hen Harrier was found with its leg almost severed in a trap set at the nest, and despite valiant attempts by a top wildlife surgeon the bird died.