It seems that modern weather forecasts emanate from just a few sources that syndicate their findings. It’s no surprise then that mainstream TV channels have remarkably similar forecasts when most of the announcers read from a rehearsed script rather than share their thoughts as informed and knowledgeable meteorologists. The best bet is to find an Internet forecast that updates time slots regularly and one that suit a particular preference or pinpoints locations for the activity that is to be pursued. After all,  a windsurfer’s needs are quite different to those of a bird ringer!
Andy and I continued our search of weather forecasts for one that might allow us a morning in the fresh air and a ringing session. By Thursday evening there was a chance that Friday morning might provide the requisite window so we duly pencilled it in for a trip to Project Linnet.
It could be that continued bad weather has delayed the Linnet departure north whereby in a normal spring winter flocks have separated and individuals gone their own ways. We’ve had 35/40 around all week when I checked and dropped more seed to keep the birds interested.
Friday saw the regular Stock Dove or two and a couple of Reed Buntings and Chaffinches feeding in the penalty area. The now resident Kestrel hovered overhead for while during its customary circuit. 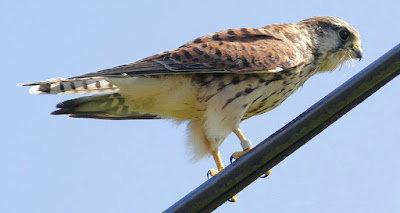 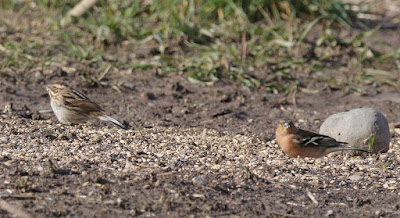 Reed Bunting and Chaffinch
A male Blackbird holds territory, and this morning at least five Skylarks in song in the immediate area where the many fence posts come in handy. 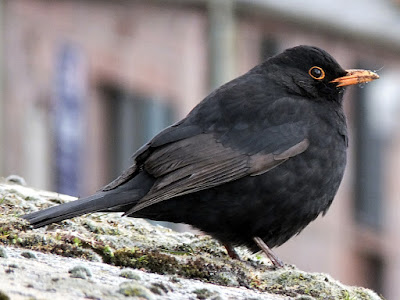 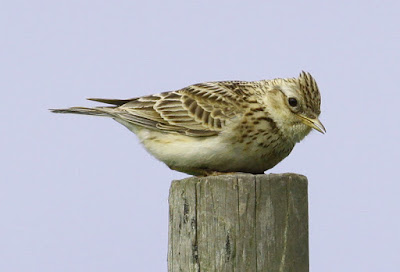 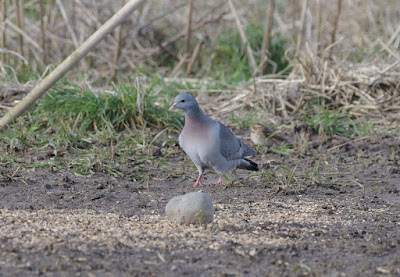 Stock Dove
Many people will be unfamiliar with the Stock Dove. A quick glance confirms their fears that it is one of those messy creatures that hang around city streets. Look closer; while the Stock Dove is indeed a member of the pigeon family this small version nests in holes in trees and in farm buildings. It’s a bird of woodland edges and parkland during the breeding season and can be seen in small flocks on winter farmland. Unlike the Woodpigeon and the Feral Pigeon, the extremely shy Stock Dove is very rarely found in towns, cities or suburban gardens.
This morning looked ideal with less than 10 mph wind and wispy cloud above. Unfortunately the Linnets didn’t play ball by refusing to visit our seed in anything other than ones and twos but instead sunning themselves in the bramble. We noted that the recently depleted Linnet flock is now quite “loose” and “stretched” compared to those of mid-winter when the birds pack tightly together. As soon as the weather takes a real turn for the better the Linnets will be long gone. 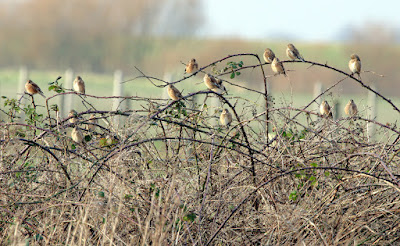 Linnets
We caught not a single Linnet and had to settle for a second year male Reed Bunting instead. We suspect this to be the male on territory and paired to the female seen earlier. 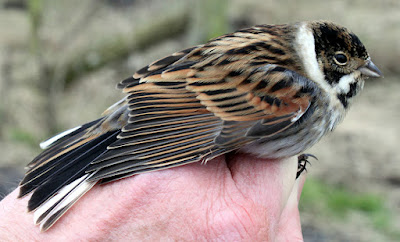 Reed Bunting
When opportunities arrived to catch three or four Linnets, we declined in favour of a bigger haul that never materialised – isn’t hindsight wonderful? We also suffered “near misses” of two or three of those Skylarks, the ones that sang on high and came down for a too brief look and didn’t stay long enough for capture. Better luck next time.
Dear Readers, stay safe and well. Carry on as normal and keep calm is the advice from here. I have no elderly parents to worry about, but I do have five young grandchildren. Take sensible and personal precautions to avoid contagion is the key, but life must carry on.

H L Mencken in 1918:
“Civilisation  grows more and more maudlin and hysterical; especially under democracy it tends to degenerate into a mere combat of crazes. The whole aim of practical politics is to keep the populace alarmed and hence clamorous to be led to safety by menacing it with an endless series of hobgoblins, most of them imaginary.” 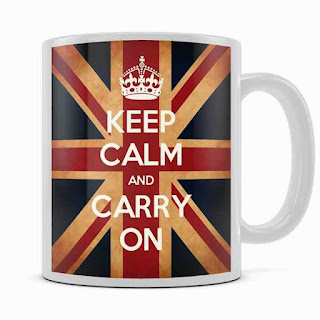 Back soon on Another Bird Blog.