Three days of sunshine and all the Goldfinches suddenly vanished from my garden. There's been 15-20 most of the winter so bang goes my plan to do a little garden ringing while in lockdown. 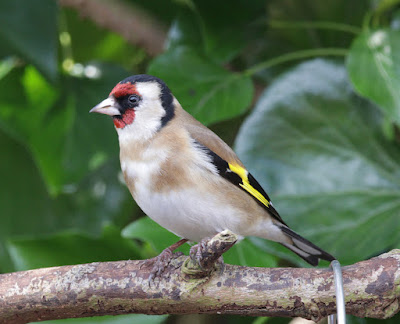 Goldfinch
So here's a post first published at the end of 2013 to celebrate the year's pictures in a month by month sequence. It’s mostly the birds which stirred the senses with odd shots of the places where memories are made.
January is time to escape from the grey, cold skies of a UK winter and grab some welcome sunshine, if only for a few weeks. We were stunned by the long, wide, sandy expanse of the beaches of Fuerteventura, some several miles long and just begging to be walked. When tired of the walking I sat on some quiet rocks near the shore and took pictures of a Whimbrel, a shy wader species I had longed to photograph. 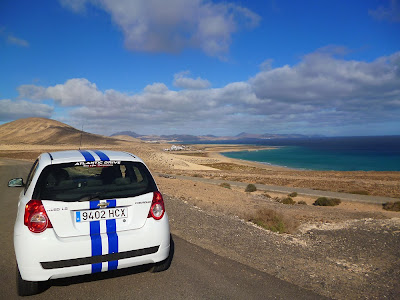 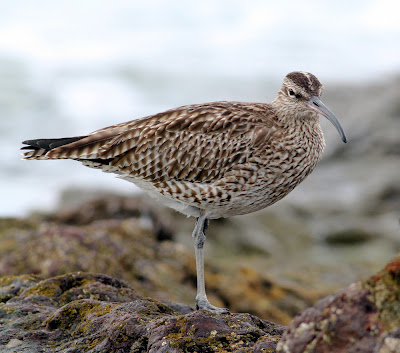 Whimbrel
February continued where I left off in the early part of the year in ringing birds out on the frozen mossland. Brambling winters don’t happen too often, 2012 and 2013 being the first for several years and a winter when I caught 66 of the striking finches. One bore a Norwegian ring, another one later captured in Norway. 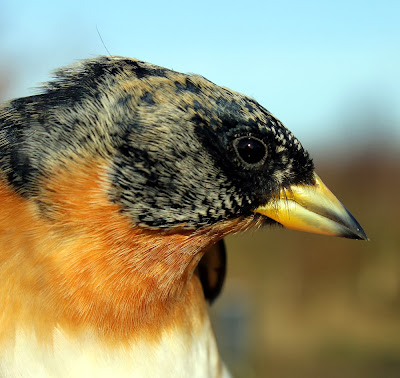 Brambling
March, and as the ice lingered on there were still Bramblings to be seen along with a good number of common Reed Buntings. Bird ringing is not about catching rare or scarce birds. Catching and ringing birds is about monitoring the populations of common birds, an important and vital job in these worrying days of wholesale declines.

Many a trainee ringer has fallen by the wayside when realising that rare birds appear in mist nets on equally rare days and that the humdrum of catching common birds is mostly unexciting hard graft. Imagine my surprise on 15th March to find a Little Bunting in the net, an agreeable but unimportant addition to the winter catch of 72 Reed Buntings. That Little Bunting was still around into April when I guess it felt the urge to migrate. 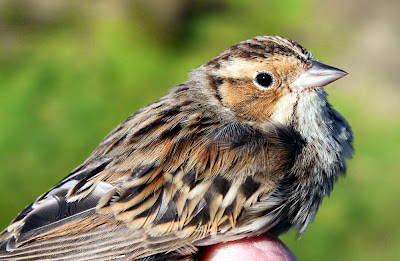 Little Bunting
April is Wheatear Time. The migrant chats appear along the coast on their way to the uplands of the UK or Scandinavia. A few are destined for Iceland or even distant Greenland. The birds are hungry following their journey from further south and can rarely resist a mealworm, so I send them on their way north bearing a ring which tells others that they arrived there via the UK. 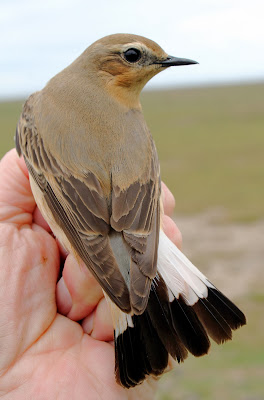 Wheatear
May usually involves Menorca. The island draws us back with its rugged and gentle landscape, quiet roads, friendly locals and spring sunshine. Birds are hard to find but rewarding when you do, unimpeded by crowds of target birders running here, there and everywhere. The Hoopoes use the same nest site and feeding locations every year. Creatures of habit also use the same café for a spot of lunch. 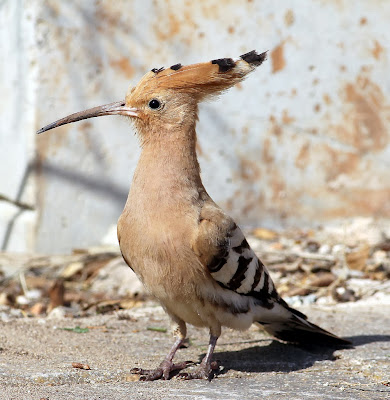 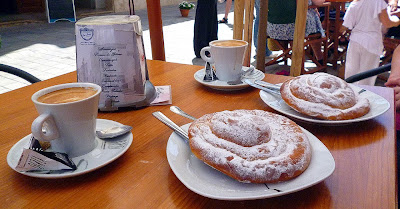 Menorcan lunch
June and it’s time to find and ring some wader chicks. The task is to find them in the literal sense but also find them before they disappear as a species from our diminishing wetlands and intensified farms. Redshanks aren’t the easiest to come across, in fact they are damned difficult to locate, sprint like Usain Bolt and have protective parents that shame many a human. The first I ringed for a good few years. 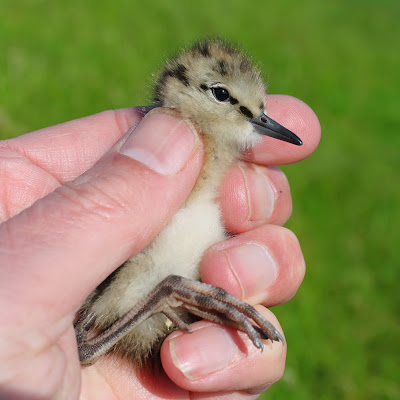 Redshank chick
July is a time when birds and birders go quiet. There nothing much to do except feed the kids and stay around the house, least of all travel very far to discover new things when migration time is far away. Skylarks aren’t the easiest of nests to find but I daren’t go near this one as the size of those grubs says the chicks are big and possibly out of the nest. Skylark chicks often leave the nest long before they can fly, an evolutionary adaptation which increases their chance of survival. 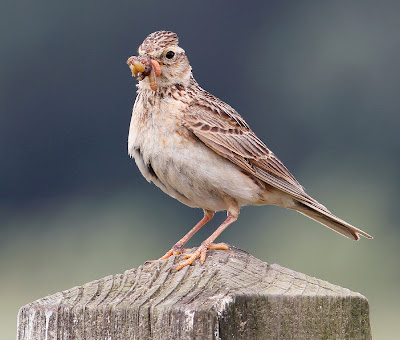 Skylark
August often sits on the fence between summer and autumn not knowing which way to jump. The cold, late spring of 2013 made late broods last into August and wader chicks about to fly. My personal favourite picture of 2013 just happens to be my favourite species the Lapwing. With luck the spikiy young Lapwing below will live 15/20 years. Let’s hope there are places for it to live 20 years from now. 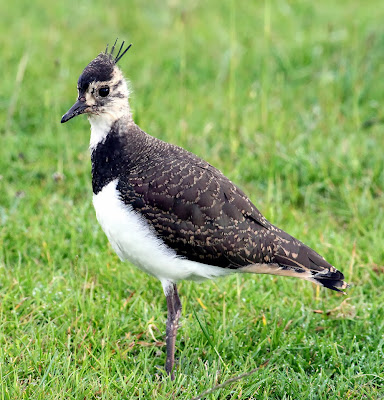 Lapwing
September produced an unexpected holiday in Greece when our daughter Joanne married on the island of Skiathos. Two weeks of unbroken sunshine with a few birds thrown in. A battered old Suzuki Jimny served as a passable hide to photograph the normally unapproachable Woodchat Shrike and a superb vehicle to reach Kastro where we enjoyed numerous Eleanor’s Falcons. So many reasons to return in 2014 to the tranquil haven of Hotel Ostria owned by the delightful Mathinou family. 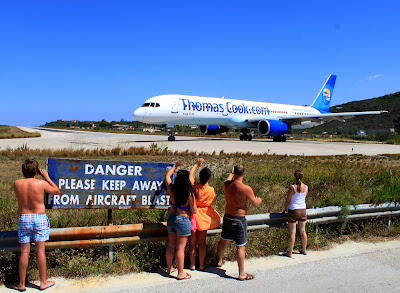 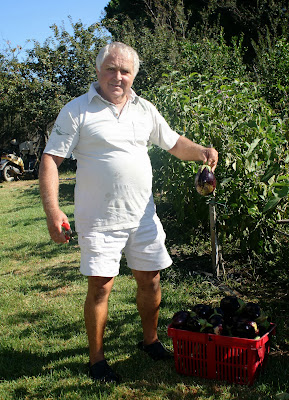 Makis and aubergines at Hotel Ostria 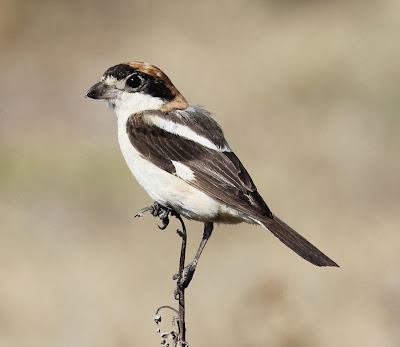 Woodchat Shrike
October was quiet with subdued migration on our west facing coast. Red-breasted Mergansers eluded me for years, shy birds unwilling to have a portrait taken until after a couple of days of rough weather I came across a young bird at Pilling. I got my picture on a grey, cloudy day but wonder what happened to the bird and if there will be another chance to photograph a merganser so close. 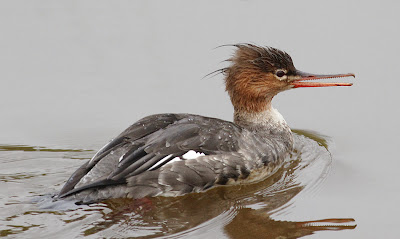 Red-breasted Merganser
November turned up a few Snow Buntings, scarce in recent years. So infrequent have they become in recent years that any discovered immediately become target birds for those less inclined to actually find any birds for themselves. I had a Snow Bunting to myself for a while at Pilling and spent time lying spread-eagled on the tideline to take a few portraits as the bird fed unconcerned at my presence. 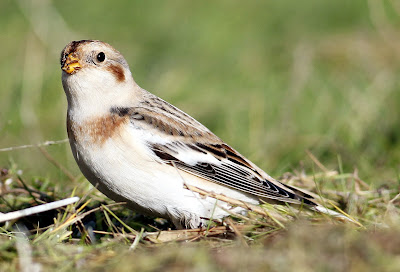 Snow Bunting
December 2013 is ending as it began in a raging storm and more to come. In between the birding was hard slog with not much to show for time spent in the field. I searched my archives for December to find the best picture of a month’s efforts, a mediocre shot of an above average bird. Things can only get better in 2014. 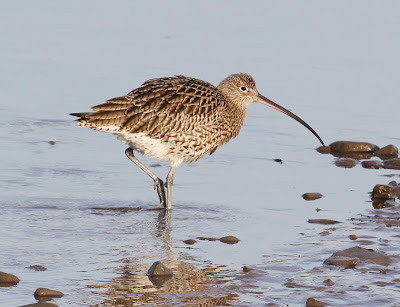 Curlew
As a footnote to the above. we won't get to Skiathos in May 2020 and maybe not in September.  The people of Skiathos suffered a financial blow in 2019 at the time of the Thomas Cook debacle - car hires, holiday lets, hotels, cafes, shops and restaurants, many of them small family businesses. Now those lovely people will be hit again as the island is already in lock-down.