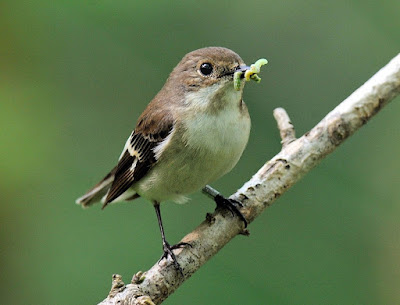 Pied Flycatcher
This flycatcher winters in tropical Africa, spending the summer in the northern hemisphere but as far south as the Iberian Peninsula where it is quite common. 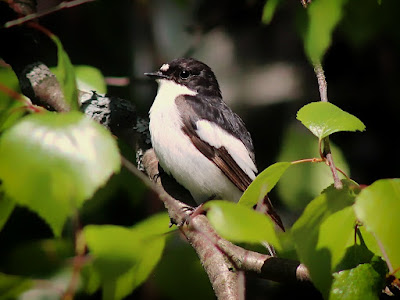 Pied Flycatcher
Pied Flycatchers breed in upland broad-leaved woodland. This means that in Britain they are limited due to geography mainly to the North and West where they prefer mature oak woodland with natural tree holes, i.e. dead trees, or dead limbs on healthy trees.
The species also takes readily to nest boxes with high horizontal visibility, in woodland where there is a low abundance of shrub and understorey, but a high proportion of moss and grass for their nests. 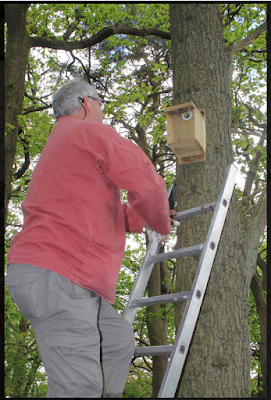 Andy - checking a box
As is usually the case,  a good number of the boxes checked were occupied by Great Tit or Blue Tit with the adults still brooding tiny youngsters or sitting on clutches as low as 4 eggs or as high as 14 eggs. Given that the weather in the month of May has been mostly poor, the progress so far has been better than expected.

Pied Flycatcher
We found one box contained Nuthatches and ringed 6 youngsters. Four boxes were occupied by Pied Flycatchers where we found females sitting on either 6 or 7 eggs and where by a week or so the youngsters will be large enough to be ringed.
The eggs of the Pied Flycatcher are about 18 mm by 13 mm in size, pale blue, smooth and glossy. The female builds the nest of leaves, grass, moss and lichens, and then lines the cup with hair and wool. The duties of incubating the eggs are performed by the female with the newly-hatched young fed by both adults. 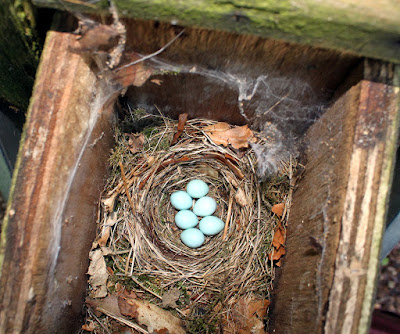 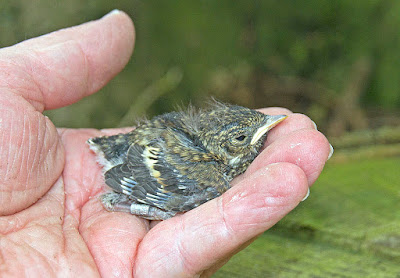 Pied Flycatcher
The eggs of the Pied Flycatcher are about 18 mm by 13 mm in size, pale blue, smooth and glossy. The female builds the nest of leaves, grass, moss and lichens, and then lines the cup with hair and wool. The duties of incubating the eggs are performed by the female with the newly-hatched young fed by both adults.
The Pied Flycatcher is a well-studied species, partly because of its willingness to use nest boxes provided by bird watchers and bird ringers.
Detailed study has found that Pied Flycatchers practice polygyny, usually bigamy, with the male travelling large distances to acquire a second mate. The male will mate with the secondary female and then return to the primary female in order to help with aspects of child rearing, such as feeding. There are a number of theories around how this apparently poor system benefits the species, but no one knows for sure except that in practice it does work.
In 2005 the European population of Pied Flycatcher was estimated at up to 12 million pairs, helped in part by the provision of nest boxes in parts of the species’ range. We checked our ringing site for Willow Warbler nests and found at one nest a brood of tiny youngsters, at another nest a female sat on 6 eggs. Dotted around the site a good number of males are in steady song with little sign of their mates, suggesting that most are still at the stage of incubating eggs. Willow Warblers are now a little late this year, no doubt as a result of the poor Spring weather to date. 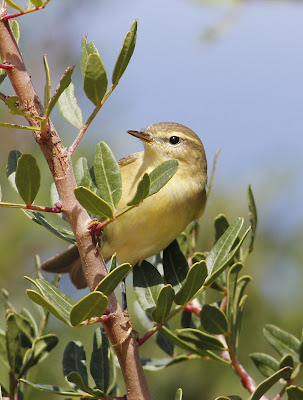 Until then, linking with Eileen's Blogging.