Enquire of a bird watcher their favourite bird. More often than not the answer will be a bird of prey, even though in the course of everyday bird watching many British birds of prey are difficult to engage with as we glimpse them but briefly.  Such is the passion for raptors that on occasions, perhaps yearly, bird watchers travel long distances, making costly and time consuming special journeys to see birds of prey like Goshawk, Honey Buzzard, Golden Eagle or White-tailed Eagle.

When Princeton University Press sent a copy of A Sparrowhawk’s Lament for review on Another Bird Blog I admit to niggling thoughts about the need for yet another book about birds of prey. What might be added to current knowledge on the subject, and who might stump up £25 for a new one.?

With so many books devoted to raptors already out there it was hard to imagine where a new volume might begin and end. 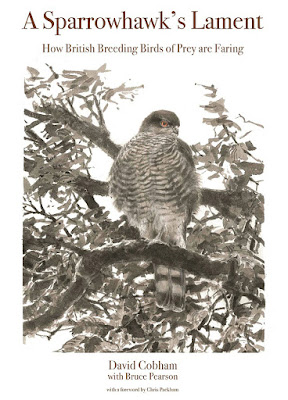 A Sparrowhawk’s Lament - Princeton University Press
So I got stuck into A Sparrowhawk’s Lament: How British Breeding Birds of Prey Are Faring, a book containing 15 chapters, one for each British Breeding Bird of Prey together with the obligatory Introduction and Conclusion. That translates to roughly 20 pages to each species, good sized chunks with which to digest the contents and consider a verdict.

From the beginning I was struck with the detail and sheer readability of the text and finished the first 40 pages of the Introduction, The Sparrowhawk and The Osprey without a break. 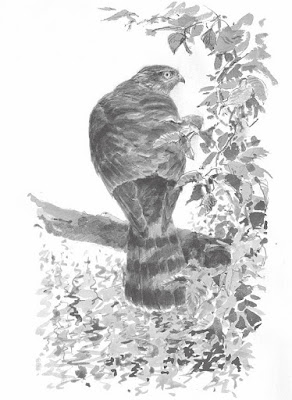 A Sparrowhawk’s Lament - Princeton University Press
I live in the North West of England, just a flap and a glide from the infamous Bowland Hills, and where after 200 years of persecution the Hen Harrier has been wiped from the landscape. Therefore I took a particular interest in the chapter devoted to Circus cyaneus, the original Silver Ghost, the Hen Harrier.

These 20 pages make for illuminating, disturbing and often emotional reading, from the crucified Hen Harrier on a barn door, the introduction of the double-barrelled breech-loading shotgun, Famous Grouse whisky, on through quad-biked keepers kitted out with night-vision goggles. The chapter  ends with a moving poem about the predictable fate of Bowland Beth. Read it all, I think you may never buy Famous Grouse again and will in all probability have a tear in your eye.

Fortunately not all of the chapters make for reading as depressing as the saga of the Hen Harrier, the magnificent Golden Eagle or the elusive Goshawk, with chapters charting success stories like Buzzard, Hobby, Montagu’s Harrier, Red Kite and Honey Buzzard to redress the balance somewhat. 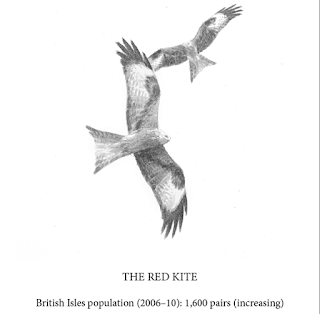 Red Kite from A Sparrowhawk’s Lament - Princeton University Press
By the time I reached The Conclusion at page 269 my own thought was that the book’s sub-title rather undersells it. A Sparrowhawk’s Lament is much more than a summary of how British birds of prey are faring in 2014, more like an entertaining read about the historical, cultural and even literary background to British raptors. The chapters are peppered with anecdotes, experiences and observations from the author and conservationists engaged in the study, safeguard or re introductions of such species. This detail gives the whole book an instructive, authentic, expert, and above all a caring feel for our often maligned UK raptors.

David Cobham has spent a lifetime studying birds and is a vice president of the Hawk and Owl Trust. In addition he is a film and television producer and director, notable for such films as The Goshawk, The Vanishing Hedgerows, and Tarka the Otter. The author’s Acknowledgements for his interviewees reads as a who’s who of raptor expertise, including luminaries such as as Ian Newton, Roy Dennis, Robin Prytherch, Wilf Norman and the late Derek Ratcliffe.

The book is generously sprinkled with more than 90 black & white illustrations by Bruce Pearson. These vignettes add greatly to the accompanying text in providing a perfect fit to the overall feel of the book.

All in all A Sparrowhawk’s Lament is a desirable little volume which I thoroughly enjoyed, and one I can recommend to blog readers for the next rainy, non-birding day.

If you don’t mind a nicely kept but used version there’s a range of prices at Abe Books.

Back to birding soon on Another Bird Blog.