Get used to it you birders. This is the dystopian, authoritarian future. The current lockdown is just a dress rehearsal for the real thing of the not too distant future.
The Department for Transport has launched a consultation paper which calls for a major move from cars into cycling, walking and buses, but has told few people about it.
The paper, Decarbonising Transport: Setting the Challenge, crept out on March 26. Citing the Government’s 2050 net-zero greenhouse-gas emissions target, Transport Secretary Grant Shapps writes of a vision where - “Public transport and active travel will be the natural first choice for our daily activities. We will use our cars less and be able to rely on a convenient, cost-effective and coherent public transport network.”
He adds: “From motorcycles to HGVs, all road vehicles will be zero emission and technological advances . . . will change the way vehicles are used.”
How will the reduction in private transport be achieved? By making private cars too expensive for ordinary people? Rationing cars to one per family? Rationing mileage  by road charging? Or maybe we will end up with scenes observed this week, where the authorities allow car travel for specific purposes only? Or more worryingly, cars for elite sections of society only - politicians by any chance? 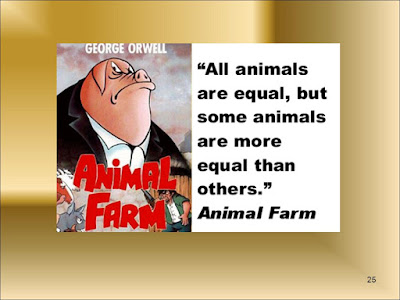 Animal Farm
Fortunately, happier thoughts are to be found in Another Bird Blog archives from December 2014 when I asked the question “Do Birds Smell?”.
==========
It’s a question I asked myself a number of years ago when noting how long it took for birds to discover new sources of food, in particular the introduction of bird feeders where none had been used previously.
Birds were always thought to have a very poor sense of smell. But most vultures and many scavenging seabirds locate their food by smell. Any birder who has been on a pelagic trip to see seabirds up close will be familiar with the practice of chucking overboard buckets of “chum” or “rubby-dubby”, to lure shearwaters and petrels close to the boat. 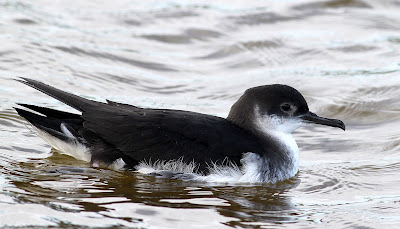 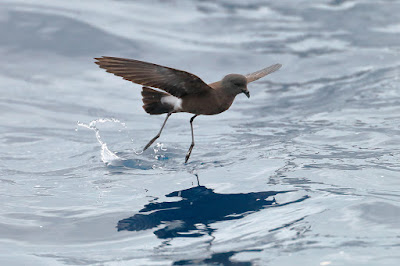 Wilson's Storm Petrel
Scientists believe that other birds, e.g. homing pigeons, may use familiar odours in finding their way home or use their sense of smell during migratory journeys. Think about the various odours given off to overflying birds by different places, e.g. pine forest or ancient deciduous woodland, saline or fresh water, the urban jungle or the countryside. 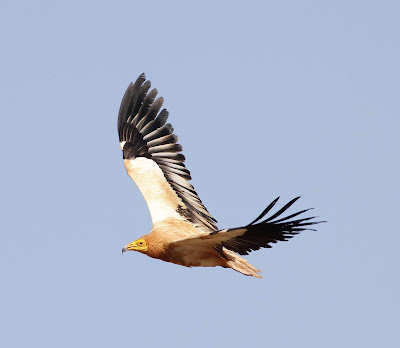 Egyptian Vulture
A recent Dutch study determined that Great Tits found and located apple trees with winter moth infestations and big concentrations of caterpillar larvae by smell rather than sight. Tit species eat large numbers of insect larvae particularly during their breeding seasons when they feed them to their young, timing their breeding to do so. Trees benefit from the protection offered by birds removing larvae that would otherwise go on to eat the leaves and perhaps impact on tree growth and productivity 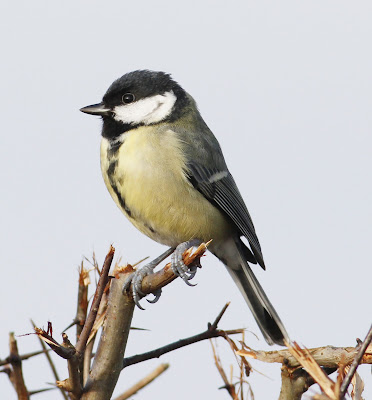 Great Tit
The Dutch experiments were designed to remove other possible ways in which the Great Tits might detect the winter moth larvae. The researchers removed the caterpillars, removed leaves with holes and even took away signs of ‘caterpillar poo’, ensuring no visual clues were left for the birds to locate the infested trees. Despite these measures the Great Tits repeatedly found the trees with larvae infestations.
The results were clear, even when they couldn’t see the trees, the Great Tits homed in on trees with winter moth infestations when they could smell them. The researchers believe the trees gave off chemicals which birds can detect by smell to alert them to infestation. It has long been known that many plants attract insects using smells and benefit from the relationships as a result, but this is the first time they have been shown to attract birds in the same way.
More research is needed to determine which chemicals are involved but infested trees were found to release more of a chemical responsible for the “green” smell of apples.
Most bird feeders use metal/plastic tubes or wire mesh to make the food highly visible to birds and we naturally assume that birds start to use our bird feeders because they locate food via their keen eyesight. My new niger seed feeders arrived today, replacements for ones recently stolen from a ringing site. At first glance the design looks improbable and unlikely to work as the feeding holes are tiny. When the stainless steel cylinder is filled with niger, the seed is virtually invisible with just the tiniest point of an individual seed poking through a hole. 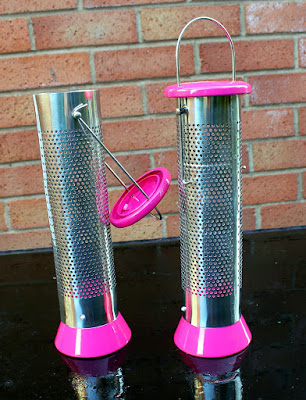 Bird Feeders
Nevertheless I experimented with this design of feeder a number of years ago and found them to be highly successful in attracting Goldfinches, Siskins and Lesser Redpolls very quickly and I attributed some of this to the birds’ ability to smell the seed. 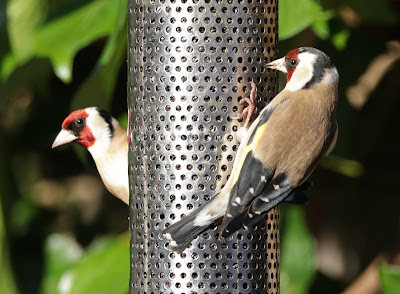 Goldfinches
Here’s an experiment anyone can try at home. Buy a sealed bag of niger seed, open the bag and stick your nose in it. Then inhale and enjoy the sweet, oily, nutty fragrance which brings in those Goldfinches
There’s is no doubt in my mind that birds and in particular Goldfinches have well developed olfactory senses, probably as good as our own.
Now you must excuse me. From the kitchen I detect the unmistakable aroma of a tandoori chicken sizzling on the grill. 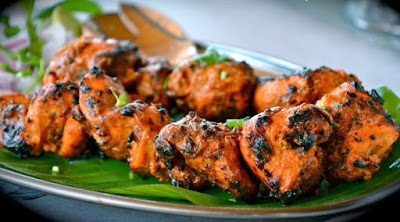 Tandoori Chicken
I'm ready for a bite to eat. Back soon with more tasty morsels from the past.
Linking today with Anni's Blog and Eileen's Saturday Blog.