Birds are well practised in social distancing; in fact they are experts. When was the last time if ever you were closer than two metres to a wild bird? The long lens on a modern digital SLR camera can play tricks with our understanding of a bird’s tolerance of being too close for comfort; many a togger has fallen foul of the cardinal rule of “keep your distance”. 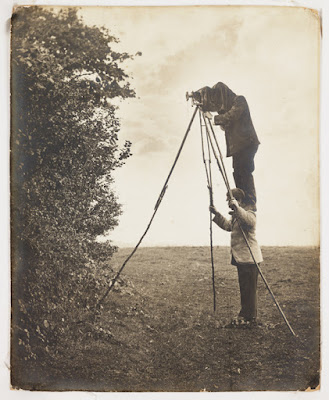 Bird Photographers
There’s a good reason birds stay away from man. Man is the apex predator, top of the food chain. Ever since Neanderthals roamed the earth with stone-tipped spears, birds have been there for the taking once nuts, roots and leaves fell out of fashion. Stone-age man could hunt and kill anything they wanted to eat. From small birds up to the largest mammals. Their world was but a meaty oyster.
Birds became a source of food, literally “fair game” in every part of the world. Birds were used as clothing adornments, jewellery, status symbols, or pets in a cage to sing for their supper. Birds are both “sport” and a gourmet meal to the present day shooting fraternity - geese, ducks, grouse, snipe, woodcock and even gold-spangled plovers to be enjoyed with a glass of the finest chateau. You name it, they shoot it.
Nestlings of wild falcons, hawks, eagles and owls are partially tamed and manipulated to become man’s slaves, for amusement or to hunt other lesser animals for their only master. But as the falconer may discover later, when the beast slips the jesses and flies far away, “you can take a bird from the wild, but you can’t take the wild from a bird”. 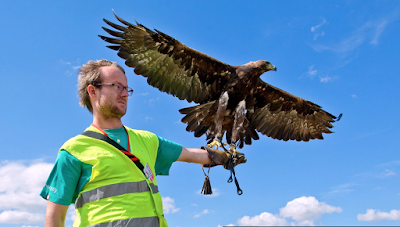 Golden Eagle
Small songbirds can be "habituated" to the presence of humans. They may not immediately fly away when a human appears but they are still wild. The human becomes a part of the background of the bird's environment and for now they accept the close proximity of a human as normal and non-threatening.
In North America a number of common songbirds become so habituated with close human interaction that they can be eventually "trained" to take food from the hand at an arm’s length. Some of the "braver" birds accustomed to the presence of humans include Tufted Titmouse, Chickadees, Ruby-throated Hummingbird, Nuthatches and House Sparrows. 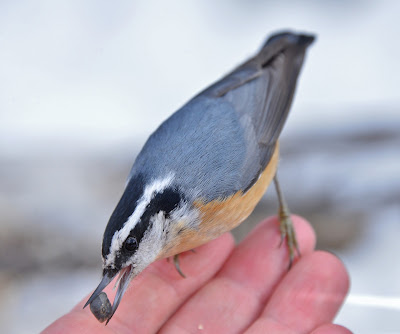 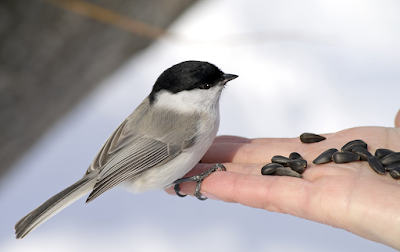 Chickadee
N.B. Trying this on with a street-wise UK House Sparrow will get you absolutely nowhere.
Here in the UK the crow family of Ravens, Carrion Crows, Jackdaws and Jays are well known for their propensity to forget social distancing. Blackbirds, Robins, the tit family and European Nuthatches will occasionally join in the fun and leave aside the rules of engagement. I once lost a shiny biro to an inquisitive Magpie when testing the theory that the crow family are entranced by man’s glossy baubles, if not necessarily by man’s proximal charms. 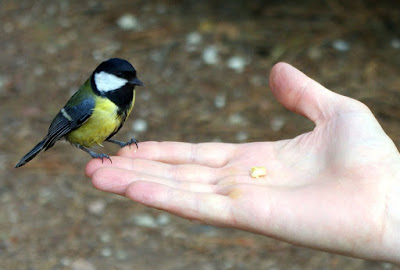 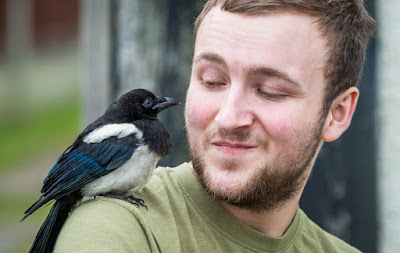 Man with Magpie - Real Fix Magazine
There’s not a lot we humans can teach birds about social distancing but maybe we can at least respect their reasons for mostly wishing to be distant from us. We must always remember that there is no such thing as a naturally tame wild bird. We are their greatest enemy.
"Birds are the most popular group in the animal kingdom. We feed them and tame them and think we know them. And yet they inhabit a world which is really rather mysterious."  David Attenborough.
Here in Lockdown Britain Sue and I are staying well and sticking to the rules to avoid the Wuhan virus.  But with the best spell of weather for six months or more, many of the natives are getting restless, setting off for the seaside, heading for the hills or lying in the park. 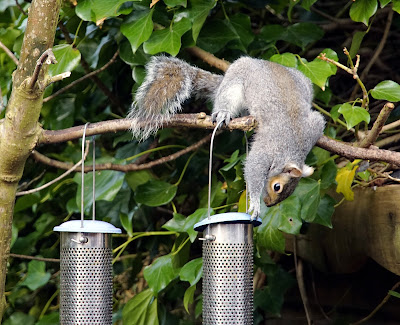 Grey Squirrel
We’re content to stay at home for now if even the garden birds are somewhat limited. Meanwhile a local squirrel tries to lift the lid and find out what is really in there.