For today’s post I reproduce a beautifully written piece about the House Sparrow. The article first appeared in The Irish Times in March 2001. So insightful and relevant is the piece still, and so little has changed, that it could have been penned just yesterday. To break the text a little I thought to include my own photographs; and then I discovered I don’t have too many of Passer domesticus, the House Sparrow. How sad is that?
The Sad Decline of the Street-wise Sparrow. Michael Viney - The Irish Times March 17, 2001.
You'd swear the sparrows hadn't eaten for a month, the way they go at the nuts: the thrust of the neck, the roadhammer bill, a shudder of effort right down to the tail. Beside them, the goldfinches are positively dainty at table, not to mention far better dressed.
That may not be fair. Granted, there were mornings in the snow when a half-dozen Technicolor goldfinches swinging on the feeder made a picture for a calendar, but a really close inspection of a cock house sparrow in spring finds a pleasing enough attire. This is when the white tips of its breast-feathers wear off, to uncover the rich black bib. A smart, dove-grey crown to the head, a crisp weave of chestnut and buff in the wings make up quite a distinctive logo for a little brown bird.
People are beginning actually to look at the house sparrow, now that it's disappearing. Stories of its decline in Ireland's cities and suburbs are matched to "catastrophic" losses in London and Glasgow. Twenty-year declines are reported in much of western Europe, and even in North America, from Quebec down to Florida. One big study near Lake Constance in Germany found sparrows down by 23 per cent in the 1980s alone. 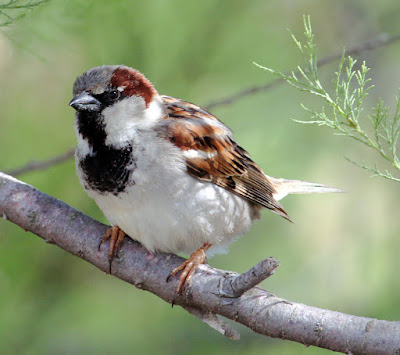 House Sparrow
Sparrows are such a diverse tribe, the evolutionary scientists' term of "adaptive radiation" might have been made for them. Our own house sparrow, Passer domesticus, is just one of 20 species spread across the world and itself has a dozen different races. Some of their names - P.d. niloticus, persicus, biblicus - hint at the ancient heartland where bird and man evolved together.
In the fertile crescent of the Middle East, sparrows were seed-eaters, feeding on the grasses that the first farmers selected into cereals. As cultivation spread, and hunter-gatherers settled on the land, the sparrow kept them company, all the way, eventually, to Ireland one way and Siberia the other. No fewer than 14 of the world's 20 species now live happily alongside people and nest in holes in their buildings.
In Ireland, P. domesticus probably had its hey-day in the early 19th century, when the population was highest, the towns had the most horses, and even the west of the island was rich in patches of oats and potato-ridge weed seeds. At the century's end, Richard Ussher found the sparrow "spread throughout Ireland to the remotest coasts, and delights in the congested districts where the numerous thatched cabins afford it comfortable homes". Ireland's sparrows shared in the decline that followed the replacement of the horse by the car and tractor. But recent decades have seen other trends working against them: the end of the west's small oatfields; of farmyard hens and ducks and their dishes of mashed potato and scatterings of grain; the mowing of grass for silage before it seeds; the ploughing-in of autumn grain stubbles, the use of herbicides to rid field margins of seeding weeds.
Many of these changes wove together in the 1970s, which is when the wider decline of the house-sparrow began to take effect. In the New Atlas of Breeding Birds published in 1993, the number of empty circles in the west of Ireland and small-farm Scotland was quite striking. 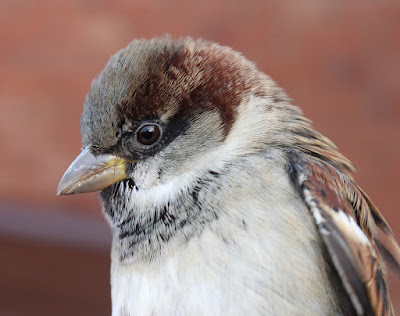 House Sparrow
Currently, BirdWatch Ireland's countryside breeding bird survey finds the sparrow nesting in only 40 per cent of the squares under census. And in its regular garden bird survey, the sparrow has dropped four places in the past four years. Now Mary Toomey, of the Department of Zoology in Trinity College, Dublin, has taken on a special study of the Irish sparrow in its natural habitats.
It's in the cities that its collapse seems most noticeable, and this invites its own speculations - cats, for example. The Mammal Society of the UK recently analysed the records of what was killed or captured, over five months, by 964 cats. Among their 14,000 prey items, which included weasels, frogs and bats, were 961 house sparrows. An earlier study, in an English village, found that cats accounted for almost a third of sparrow deaths in one year.
But the impact of predators does not impress J. Denis Summers-Smith, the British engineer who has studied sparrows for 50 years, as an important explanation. Not even the undoubted increase in urban and suburban sparrowhawks seems to him to have much bearing on the "catastrophic" inner-city declines.
Some conjecture that these declines have coincided with the introduction of lead-free petrol, with its special additives, or that the particles in diesel exhaust may block the sparrows' capillaries. But the picture of a sudden inner-city collapse could be misleading. The real stronghold for the sparrow has been the suburban garden, and the dispersal of surplus young from suburban nests may have masked a decline both in the city and the countryside.
For Summers-Smith, the big pressure on Passer domesticus has to be food - not so much the fall-off in year-round seed supply as in the insect food needed by the sparrow nestlings for the first critical days of their lives. Perhaps, by helping to kill off the arthropods - the insects, spiders and crustaceans - traffic fumes are working to make cities unlivable for these once street-wise little birds. In this respect, he suggests, we should think of the sparrow as the modern equivalent of the miner's canary. 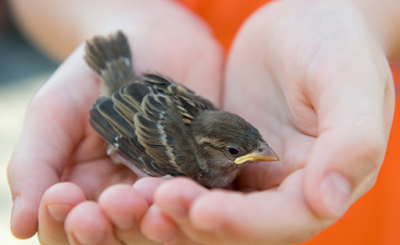 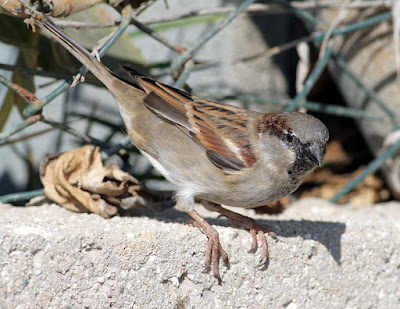 House Sparrow
On our Mayo acre, at least, neither insects nor grass and weed seeds are any problem. Our little colony of a dozen or so sparrows built up quickly a few years ago, drawn by the winter nut-feeders, and will clearly be with us for the rest of our days. They have a special fondness for the thorn bush that leans above the septic tank and gather there for sessions of "social singing" on winter afternoons, a disyllabic Greek chorus drifting in the wind.
Now, the chirruping is more scattered: a communication between partners. One lifelong pair are already well ensconced in the hole they used last year, under the ridge tiles of the porch; others find niches in the wood-shed. If I put up nest-boxes, tits and sparrows would compete for them and the sparrows, probably, would win. There is a critical size of hole that excludes them (32 mm), but who, in these changed days, would want to know that? 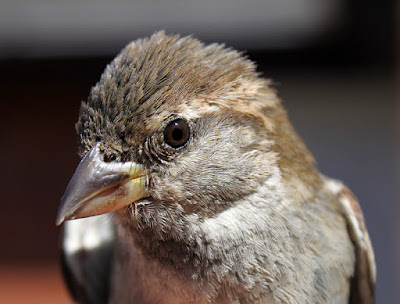 House Sparrow
==================
For the current state of play of the House Sparrow I recommend a read of The British Trust for Ornithology
Or maybe the story about The Most Common Bird in The World at Smithsonian US.