Even at ten o'clock this morning the sun was pretty hot.  I cut the grass back and front then settled down for a while to read a few chapters from one of my favourite ever bird books - Ten Thousand Birds: Ornithology since Darwin.

I first reviewed this book for Princeton Press back in early 2014.  Here's a copy of that review for any readers yet to discover this superb read.

=============================
I was thrilled to receive for review by Another Bird Blog a copy of Ten Thousand Birds: Ornithology since Darwin, due for publication by Princeton University Press on 26th February 2014.
“Eager anticipation” barely described my six month or more wait for this book, the most recent and potentially the best in a line of books devoted to the history of ornithological study. I noticed immediately the dust jacket bearing praise and recommendation from the likes of Ian Newton, Walt Koenig, Jeremy Mynott and Frank Gill; so after my marathon wait would the book live up to the expectations of a bog-standard, open minded, always curious, but mostly unscientific bird watcher? 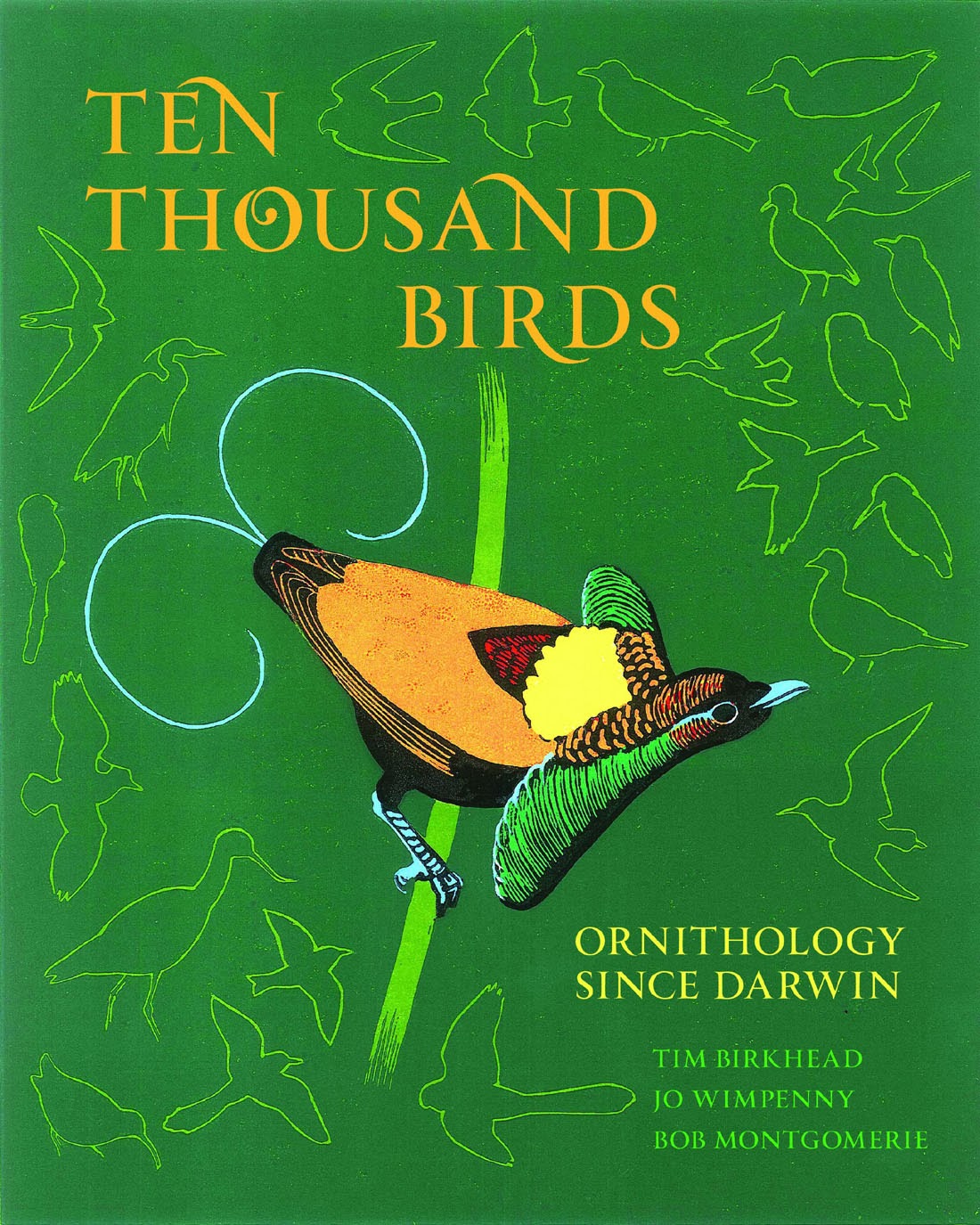 The Preface quickly sends readers to Appendix 1, a list of approximately 24 “histories of ornithology”, very few of which actually hold information of late twentieth century advances in the study of birds, most of the books dealing with early ornithology up to the mid-twentieth century at best. Through a simple but highly effective line-graph heading inexorably north the authors display how ornithology has exploded since 1960 and continued to advance during the millennia - “Since Darwin published The Origin of Species in 1859 we estimate there have been no fewer than 380,000 ornithological publications. In 2011 there were as many papers published on birds as there had been during the entire period between Darwin’s Origin and 1955”.

This sets the scene for the pages which follow, a comprehensive exploration and analysis of ornithology during the 19th, 20th and 21st centuries, a riveting, entertaining, enlightening and frequently inspirational read. It is the history, science, art, and where necessary the politics of ornithology since Darwin to present day, each themed chapter skilfully leading the reader through the years.

The Preface describes how the authors Tim Birkhead, Jo Wimpenny and Bob Montgomerie set about deciding the book’s scope and approach and whether that should be chronological order, one based upon the “top” ornithologists from Darwin to date, or one written around topics. Wisely they chose the latter approach whereby the 11 topics start at the beginning with Yesterday’s Birds and the first fossil discovery of Archaeopteryx and finish at Page 423 with Tomorrow’s Birds and a graphical timeline for conservation study, a chapter devoted to a future of ornithology heavily focused upon the preservation of birds.

In between those two poles come compelling historical accounts discussing and describing themes such as Origin and Diversification, Birds on the Tree of Life, Ebb and Flow, Adaptations for Breeding, Form and Function, The Study of Instinct, Sexual Selection and Population Studies.

The chapter titles give little away as to their contents and might fool a reader into thinking the text to be the dry and dust that history is reputed to be. Far from it, each and every chapter makes for engaging, exhilarating and often exciting reading encompassing the day-to-day science, the exploration of ideas, the trials and tribulations of a workaday ornithologist and the sanity or otherwise of the early collectors whose egos or lust for fame led them to visit dangerous realms.

I very much liked the topic based approach of the chapters, the main advantage being that each section can be read in isolation without detriment to the overall understanding and enjoyment of the whole book. I don’t recommend trying to read this book from cover to cover in one go, or even in a week or more, it is far too good to rush through, more one to savour slowly, a piece at a time.

Each chapter opens with a superb coloured plate from artists such as Raymond Ching, Robert Bateman, Eric Ennion, Robert Gillmoor or Rodger McPhail to set the scene, and within the first few pages a handy at-a -glance graphical timeline to indicate the contents. I recommend that to fully appreciate where the ensuing pages will take them, a reader study the timeline summary before embarking upon the chapter. 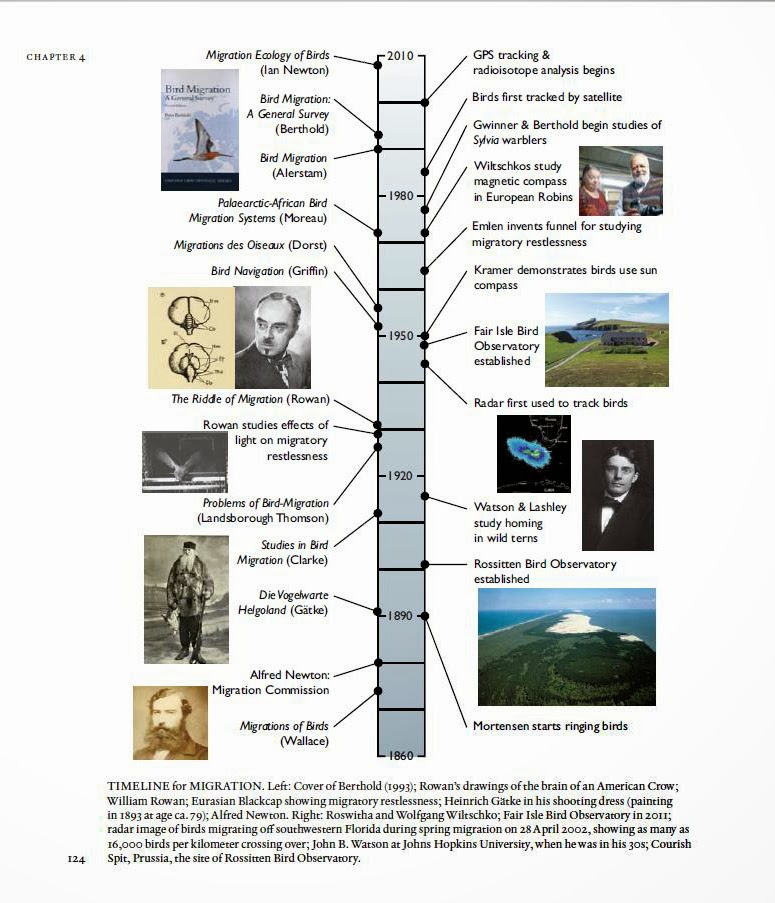 As is my particular mind set, I headed to the first chapter “Yesterday’s Birds” to learn more about work on the origins of birds and then made a bee-line for the chapter “Ebb and Flow” to satisfy my interest in migration. As a sampler for blog readers and those already adding the book to their wish-list I have summarised the two chapters below.

Yesterday’s Birds reminds us that right up to the present day the world of birds never lacks controversy or political intrigue, a world where too often the goal of scientific study takes second place to personal aggrandisement. This chapter takes the reader from the first Archaeopteryx fossil discovered in 1855 and then through the “Bone Wars” to the present day where 11 Archaeopteryx specimens exist alongside recent revelations of colouration in fossilised feathers. Along the way the story relates amongst other things how a newly discovered specimen of Archaeopteryx insured for a million pounds found its way into a battered cardboard box, and how claims of Archaeopteryx fakery aimed at ornithologists by respected scientists from unrelated areas of science was played out in the popular press of the “enlightened” 1980s. 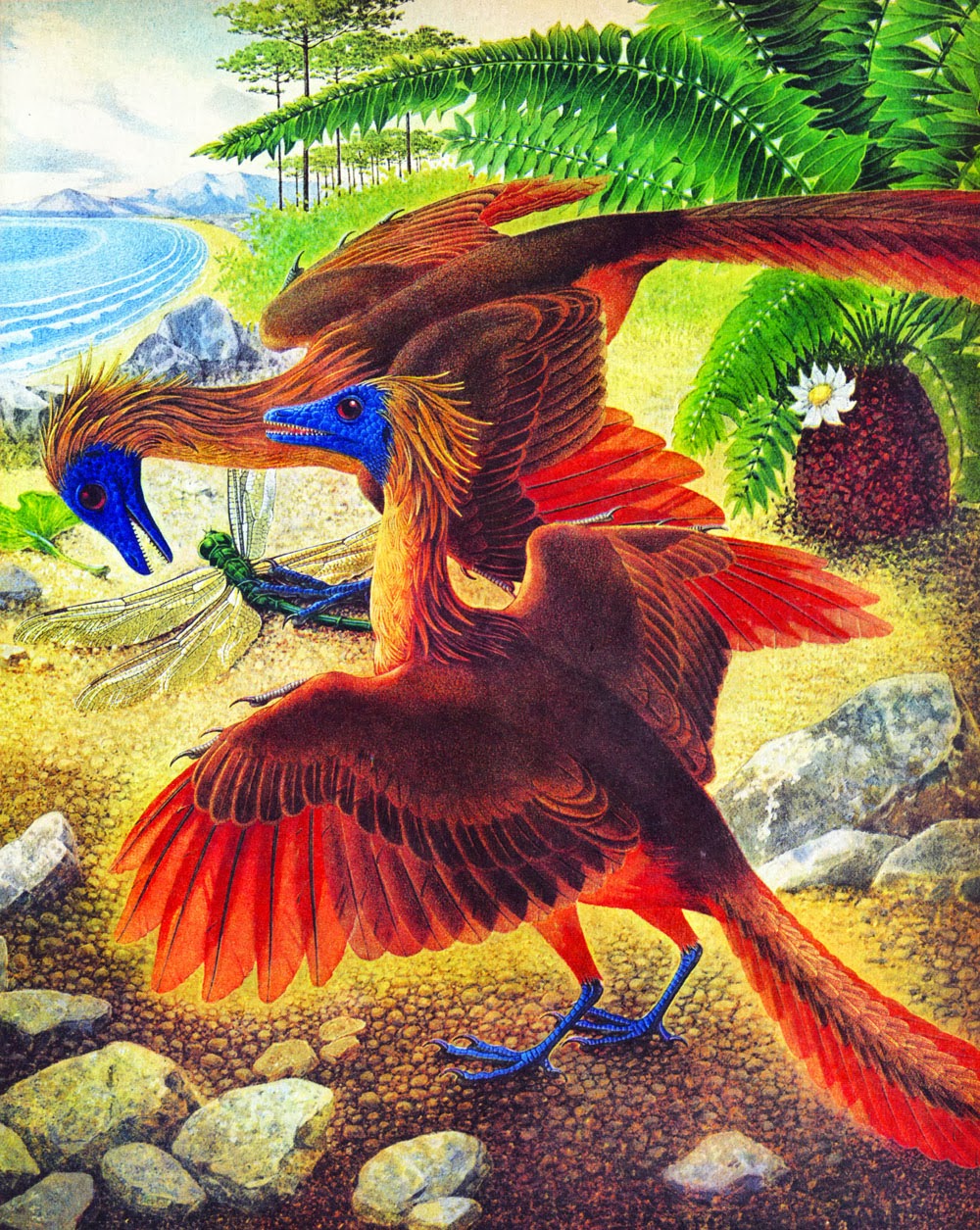 Archaeopteryx lithographica in LIFE magazine c 1959 - Ten Thousand Birds: Ornithology since Darwin
The section Ebb and Flow begins with the pioneering work of William Eagle Clarke and Studies in Bird Migration of 1912, finishing with the remarkable and only recent discovery that Bar-tailed Godwits fly from one end of the earth to the other in a single 175 hour non-stop 6500 mile flight. In between there’s the celibate, obstinate, but devoted to bird study Alfred Newton, Christian Mortensen and his early bird ringing. There's Thomas Alerstam and Bird Migration, Fair Isle, Ian Newton’s Ecology and Bird Migration, Gwinner and Berthold and their studies of Sylvias, and much, much more.

It was in Ebb and Flow that I found an autobiography of the great Peter Berthold and how at the age of ten he was illegally catching Great Tits when he came across one ringed by an accredited scheme, a crucial experience which led to him joining the German Ornithological Society and to finally reach his “true heaven of ornithological research”. The rest, as they say, “Is History”.

Most chapters are dotted with these personal autobiographies, tales which make for entertaining and often amusing vignettes, sprinkled as they are with descriptions of the writer’s ornithological awakening and their later adventures in the search for knowledge.

I’ll quote from a couple here as examples of how wide ranging, stimulating, simply down-to-earth and not without humour this book is. But perhaps only by going out and buying the book will blog readers discover the name of the self-confessed birdy beginnings of the now highly respected ornithologist below.

“I was an amorphously nerdy, science-oriented and myopic kid without any clear direction. Before birds I was passionately engaged in memorising unusual facts from the Guinness Book of World Records … I got my first pair of glasses. Within six months of the world coming into focus I was bird watcher. I never looked back or even considered any other option in my life”

Or Nick Davies from my own part of the world, and an extract which as I read it caused an immediate lump in my throat. “One of my earliest memories is making a hide out of deck chairs and using operas glasses to watch chaffinches. We lived thirteen miles north of Liverpool and were surrounded by wildlife. Pink-footed Geese used to fly low over our house and I have worshipped them ever since”.

As the authors state early in the book, “Although bird watching was a pre-cursor of scientific ornithology and many ornithologists began their careers as bird watchers, this book is not a history of bird watching.” Well hooray for that, and the advice from Richard Feynman US Physicist, Writer and Educator (1918-1988) in the section entitled “Afterword”.

"You can know the name of a bird in all the languages of the world, but when you’re finished, you’ll know absolutely nothing whatsoever about the bird….. So let’s look at the bird and see what it’s doing- that’s what counts. I learned very early the difference between knowing the name of something and knowing something." 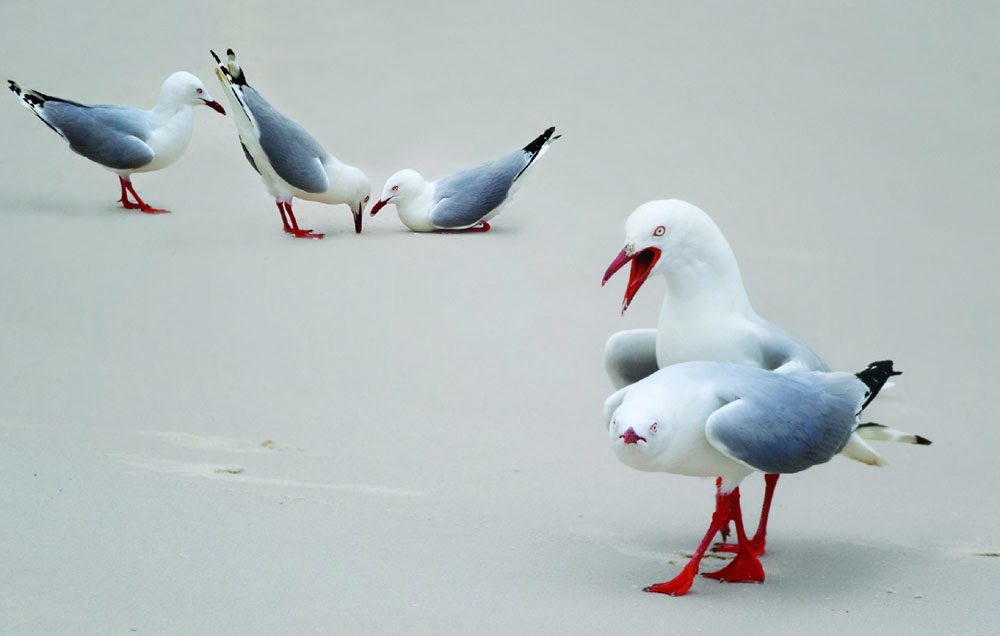 Silver Gulls on a Tasmanian Beach - Princeton University Press
There are over 150 mixed illustrations, charts and photographs dotted around the text, many of them black and white pictures of the individuals or groups of ornithologists featuring in the text, pictures so personal that they may well have originated from family albums. Others show ornithologists with their charges the birds, or show them engrossed in experimentation, exploration or simply posing for the historic record. 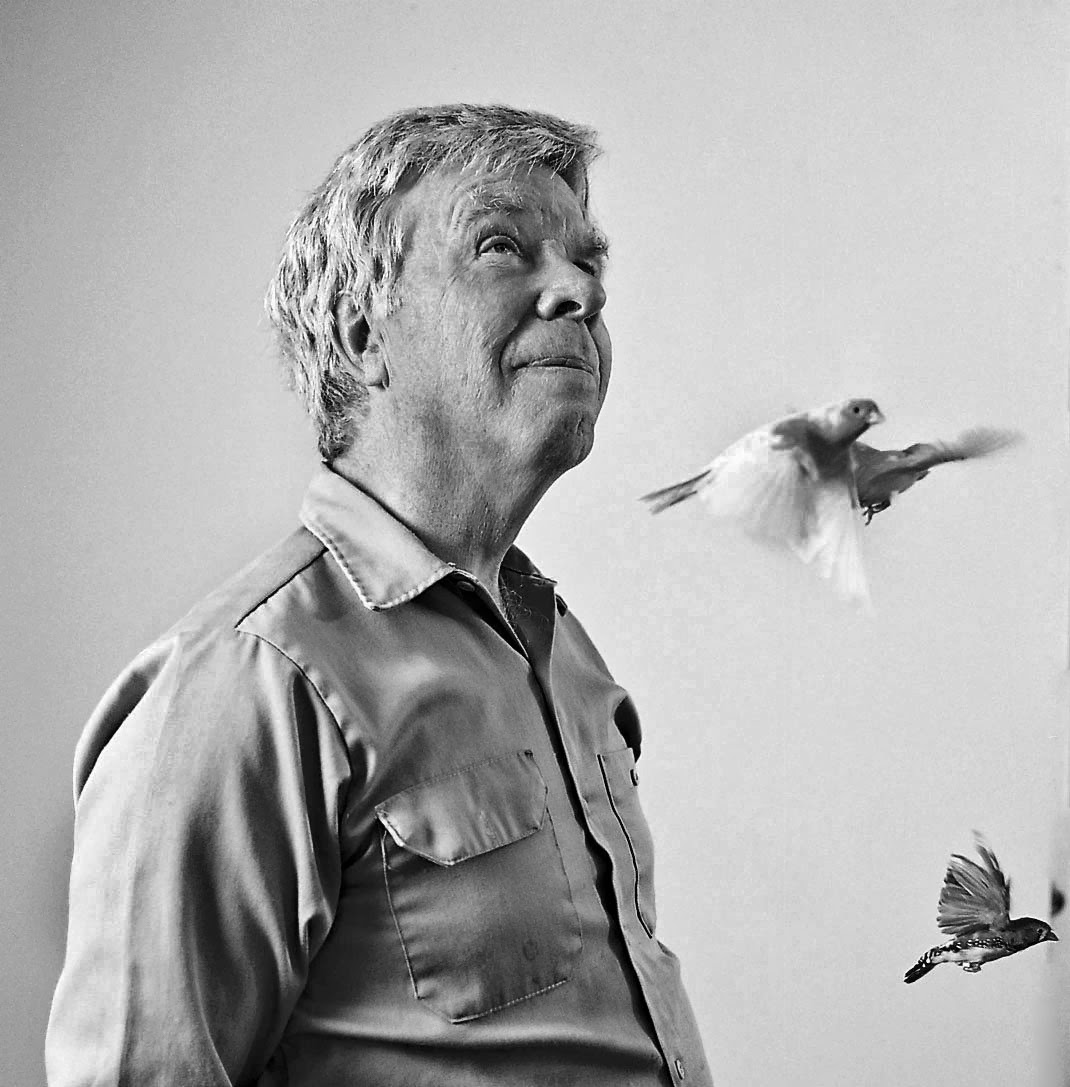 Fernando Nottebohm - Ten Thousand Birds: Ornithology since Darwin
I could go on to describe and praise this brilliant book, picking out some of the simply wonderful stuff within but I would prefer that blog readers discover it for themselves.

At Princeton University Press, read about the original motivation for the book, the authors, the artists who provided the superb plates, but most of all sample some of the superbly crafted writing. 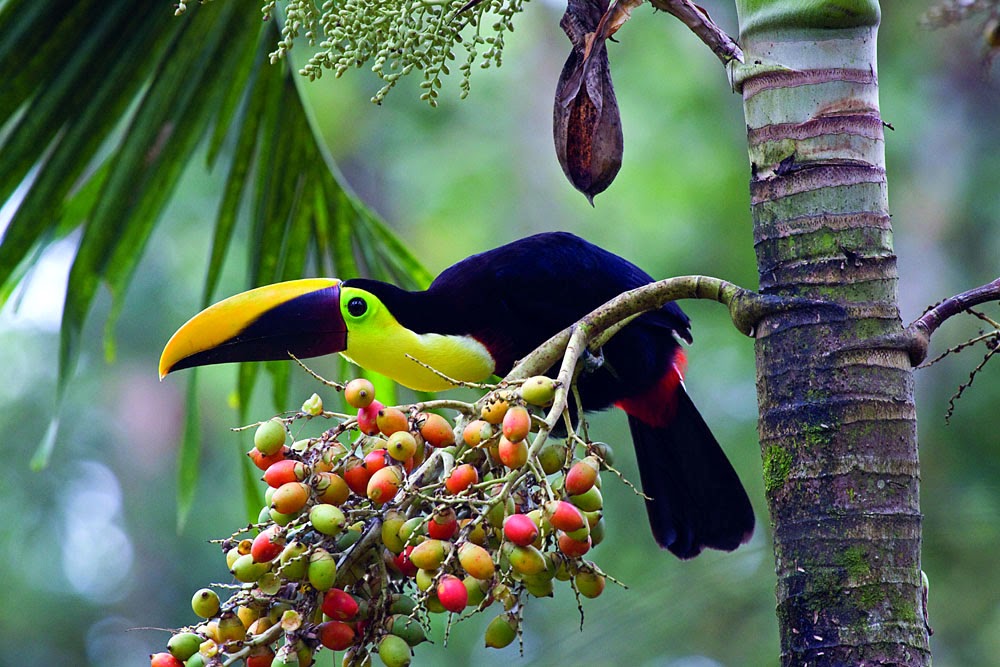 Chestnut-mandibled Toucan - from Ten Thousand Birds: Ornithology since Darwin
I imagine that Ten Thousand Birds: Ornithology since Darwin is a book which will be bought by every professional or amateur ornithologist the world over. Almost certainly it will be on a wish list of many, many amateur and professional naturalists, whether their speciality is birds, bees, butterflies or other more esoteric disciplines.

It is a book which should be bought and read by every serious bird watcher, but as is today’s focus on instant thrill, it may not be. I sincerely hope that my praise will influence some who may not otherwise have done so to buy this book; better still that a young person may somehow find this book the inspiration they need to follow a career in science and ornithology in particular.

As we have come to expect from Princeton University Press the fit and finish of Ten Thousand Birds: Ornithology since Darwin is immaculate, and of simple but understated quality. When I looked at the selling price I was amazed to see that Princeton University Press marks it up at £29.95 or $45, while at the same time allowing Amazon to knock it out for closer to £21 and its dollar equivalent.

Now I know nothing about the economics of the production, publication and sale of books but after studying the contents of Ten Thousand Birds: Ornithology since Darwin, I can only think that Princeton has either done their sums wrong or are adopting a “Pile ‘em high, Sell ’em cheap” strategy.

Whatever, it’s simply the best value for money bird book out there and at those prices there will be a huge demand for this book on 26th February. So my advice to readers of Another Bird Blog is clear. Place an order now, you won’t be disappointed.

You bet. What a tremendous book. It's just the job to inspire every birder to get out there and do it just as soon as we can.

The price may have increased a little with inflation but at $45 or £38 from Princeton Press this book is still amazing value.

In 2015 this book won the Association of American Publisher PROSE Award in History, Science, Medicine & Technology.