The country continues to survive under house arrest, with any visits into the open air shrouded under a haze of paranoia about being caught, dobbed in and/or fined. I see that even the twitchers, and at the height of rarity May, have somewhat reluctantly decided to cool it a little.
A number of WhatApp bird groups have shut up shop following heated discussion around who, when, where, why and how. While yet other birding web sites that shall be nameless point to birders’ remarkable capacity and inventiveness for bending the rules.
Meanwhile my recently revived book review for Ten Thousand Birds: Ornithology since Darwin hit the right spot for Anni over in lockdown Teaxs where she promptly ordered a copy. I hope it’s arrived Anni and I expect by now you’re thoroughly enjoying your new read?
Talking of books I know of someone working hard on the writing and the many illustrations for her next book; Katrina van Grouw, the young lady with a remarkable talent of combining fine writing skills with superb illustrations.
While you are working so hard Katrina I shall remind readers of your last book Unnatural Selection. This review first appeared on Another Bird Blog almost two years ago on 4th July 2018.
========================
I came across Katrina van Grouw’s work as an author in 2012 when I reviewed her first book The Unfeathered Bird here on the blog. The book was somewhat unique, a seamless marriage of instructive art and natural science which portrayed Katrina’s talent as a self-taught scientist and a gifted illustrator of animals. That first book was an impressive and quite remarkable début.
And now I have a copy of Katrina’s second book for review. It is even more outstanding and stimulating than the first; a brilliant concept that is quite stunning in its presentation and execution. 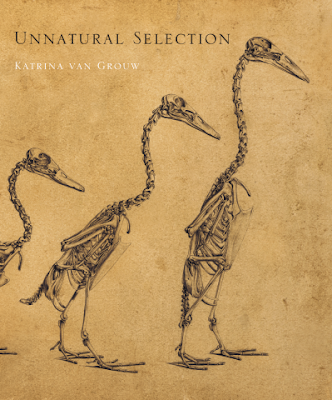 Unnatural Selection -  Princeton University Press
Unnatural Selection is a celebration of the work of Charles Darwin and the 150th anniversary of Darwin’s classic work The Variation of Animals and Plants under Domestication (1868). Darwin’s most famous work is of course The Origin of Species (1859). Whilst formulating this theory of evolution Darwin’s years of research included extensive experiments in the selective breeding of plants and animals. He found evidence that species were not fixed and his investigations led to many detailed ideas which refined and substantiated his then revolutionary ideas about the origin of life on Earth.

The cover illustration and inside double page spread of Unnatural Selection “The Ascent of Mallard” (shown above) neatly hints how evolution is discussed in the ensuing pages. The drawing portrays how with gradual artificial selection, the common or garden Mallard Anas platyrhynchos became the Indian Runner Duck Anas platyrhybcchos domesticus – evolution intensified by the hand of  man.

Katrina reminds us early on of her wish to weave art and science into the narrative, that the two subjects are not mutually exclusive and in tandem can prove exhilarating and intellectually stimulating. “…evolution… the most profound and exciting field in all biology. Art and science are not at opposite poles…….pursuing both needn't be a compromise. Pity the dry scientist or the airy-fairy artist with their narrow perception of the world. Together art and science add up to a richness and depth that far exceeds the sum of their parts."

The book comprises 4 Parts - Origin, Inheritance, Variation, and Selection. Within those parts are 12 Chapters of crisp but detailed explanation that build on the analogy that Darwin himself used by comparing the selective breeding process (as opposed to simple domestication) with natural selection in the wild. Katrina’s background in natural history gives her a clear appreciation of both wild and domestic animals, their anatomy and variation. She has numerous accounts and stories behind them and recognises their significance for the understanding of evolution.

She features a multitude of examples of familiar selective breeding that go largely unrecognised as a form of evolution e.g. - dogs, cats, geese, ducks, canaries, finches, budgerigars, wildfowl and pigeons. A perfect example is familiar but perhaps not realised by all - the wild Rock Dove, Columba livia, the ancestor of domesticated, feral and racing pigeon. 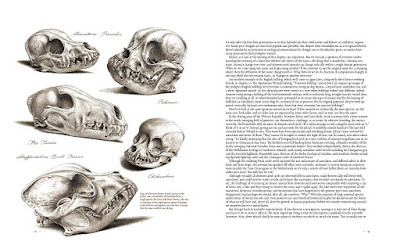 Dogs - all descended from the Grey wolf. - Unnatural Selection
Katrina’s writing is full of passion and excitement for her subject. It is also intelligent, fluid, witty and easily read & understood, even for someone unscientific like me.

Here’s one tale from the many pages of her vivid writing: Chapter Four, Coloured Liquid; Coloured Glass. “One winter’s afternoon¸ I could have been seen fighting my way through a snowy squall across a desolate expanse of common land in north-east England leading a nanny goat on a length of rope. I was looking for a billy goat. My goat, Alice, was on heat, and as she was destined to be a milker, she had first to conceive. Goats don’t remain in heat for very long, so, regardless of the inclement weather I was forced to answer the need for immediate sex. There were usually animals tethered out on the common and, as I hadn't the slightest intention of paying for the service, it was a case of seizing an opportunistic union when no one was looking. Alice was a strapping beast, of no particular breed, but quite the tallest goat I've ever seen. However, the only male I could find that day was a tiny pygmy goat that could have easily walked between Alice’s legs without touching her belly. Undeterred, I untied the little chap and led both animals to a steeply sloping bank where I re-tethered the male at the top and Alice at the bottom, thereby compensating for his vertical challenges at least. Five months later she gave birth to two normal-sized kids, each barely smaller at birth to their pygmy goat father.”

The chapters are liberally dotted with fine illustrations that relate directly to the examples she describes. These splendid, sometimes full, or even double page drawings, are without exception simply magical, so delightful and brilliant that if anything, the reader is drawn to study them in such a way and for so long as to neglect the text and then lose the thread of the discussion.

There are 400 illustrations in the book. I use the word “illustrations” advisedly as this is the term given by the publisher. I rather think that many of the superb illustrations are works of art in their own right, up there with the very best of wildlife fine art. One of my favourites is her study of geese - simply superb. 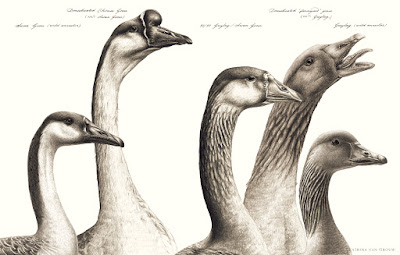 Goose Ancestry - Unnatural Selection
In the Preface the author relates how in a previous life her application to study Zoology at Oxford University was rejected. Oxford’s loss is our gain so Kudos to Princeton University Press and their realisation that Katrina van Grouw has a unique talent; full marks to them for helping her to follow this now chosen path and to produce such an outstanding book. Unnatural Selection is so special and so brilliant in every way that I would not be surprised if it soon carries off a major prize of the book world.

Just lately I donated my copy of The Unfeathered Bird to a local school of 11-15 year olds in the hope that it might inspire one to follow such an interest or a career in either subject.  Eventually I will do the same with Unnatural Selection but for now I will read the book cover to cover and savour each page. 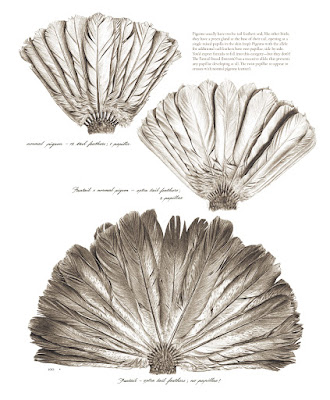 Dear Reader. You can own this extraordinary book for just $45 or £35 at Princeton Press. 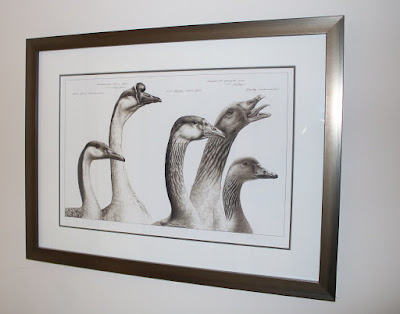 Yes, that amazing drawing of geese still hangs in pride of place in our home where visitors see it upon arrival and where I pass it each day to my "office".

Readers, you too can have Katrina's work in your home by investing just a little of that cash you saved by staying home in the last few weeks.

Linking this post to Viewing Nature With Eileen and Anni in Texas.