There’s good news. Ringers in England may go ringing again subject to following the constraints which apply to the public as a whole. It’s bad luck for ringers who live in Scotland, Wales or Northern Ireland, whose devolved governments have taken a tougher line on releasing folk from house arrest.
Andy tells me that via cameras in each box, the Kestrels of 2019 have five eggs while the Barn Owls are in situ but yet to lay any eggs. Mid-June should see more progress with both species and a then a spot of ringing when the youngsters are big enough. 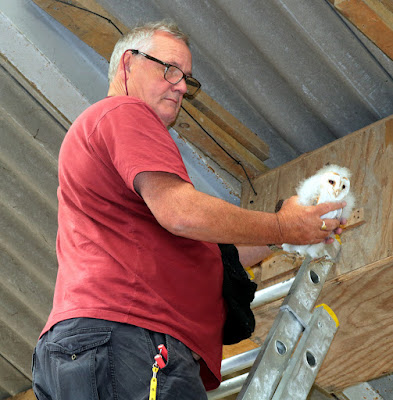 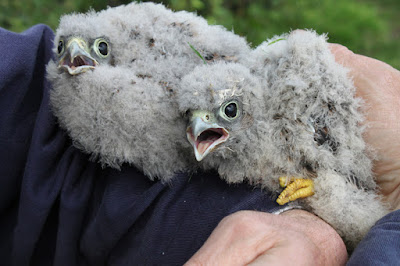 Kestrels 2019
I was due to meet Andy later for a foray to a private site that has ringing possibilities. But first came a trip to Conder Green with the heated seat switched firmly “on” and the cabin heater to “max” when the dash said “-3°C” and I saw the layer of ice on the windscreen.
A quick check of Conder Green’s pool and creeks revealed a few changes but nothing extraordinary. Both Avocet pairs appeared to be on eggs, one of the females is shown in the picture below sitting in her depression in the ground while her mate feeds closely by. There were still two pairs of Common Tern finding food here on the pool or out on the near estuary and where the tiny fish soon become presents to sitting a mate. 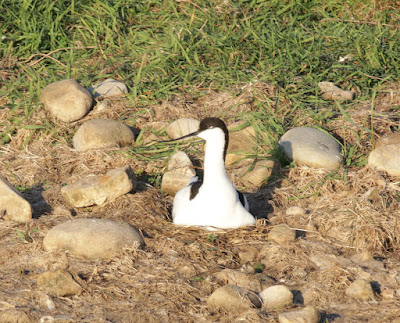 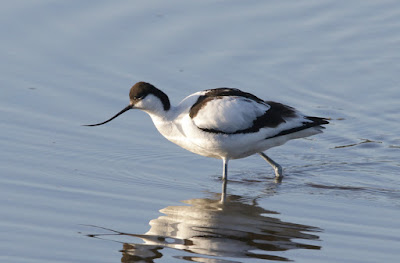 Common Tern
A pair of Great Crested Grebe put in a brief appearance before they flew off in the direction of Glasson Dock where the species breeds in most years dependent upon disturbance and suitable water levels. A pair of Canada Goose have success by way of 4 tiny goslings.
In the creek Godwits continue to fluctuate with today 44 Bar-tailed Godwit and 4 Black-tailed Godwit. There was a single Greenshank and a lone Dunlin. Four Swift was my highest count of the year so far on this the fourteenth of May.
That completed the lightning visit to Conder Green because I was due to meet Andy at a local farm. The farmer, let’s call him Tom, Dick or Harry, emailed last week to ask if I would spend time on his little piece of heaven and make an inventory of the birds seen so as to help with his green credentials. “No more than two people”, he stressed.
“OK Boss”, I replied.
“I will take a look once lockdown is ended.”
Now by mid-May we hoped to find active Skylark nests on his land and better still, ring a few youngsters before the season ends. Initially, and somewhat rarer than finding Skylarks were 2 pairs of Corn Bunting.
It was pretty hard work as the males were very mobile around a number of song posts both fence and bush. It’s likely that females were sat on eggs or even tiny young but Corn Bunting nests are notoriously difficult to locate. It’s probably 20 years ago that I last ringed nestling Corn Buntings so it would be nice to reacquaint with them when they have become so very scarce. 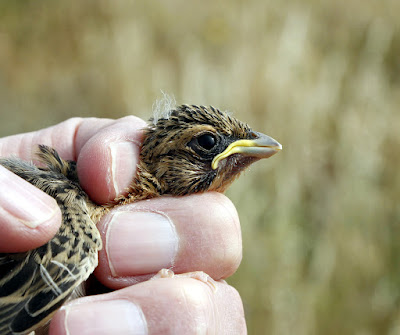 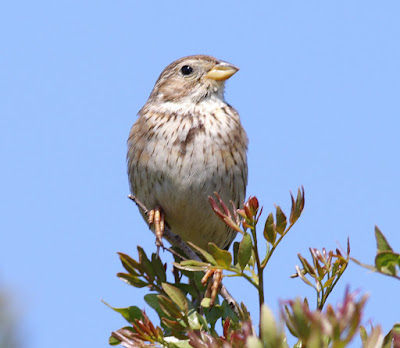 Corn Bunting
Skylarks were fairly thin on the ground with at least 5 singing but little sign of activity at ground or fence post level. We’ll take another look soon when there may be more action if the larks are late or failed on first attempts.
There’s a small copse and a few nice stands of phragmites reed where we found 6 singing Reed Warbler, 4 singing Reed Bunting and 2 Sedge Warbler. In the copse that surrounds a tiny pool we discovered Little Grebe, Grey Heron, 4 Tufted Duck, an overhead Buzzard and a patrolling Kestrel. 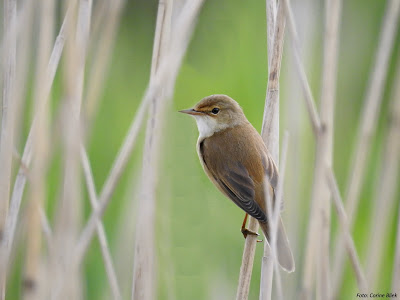 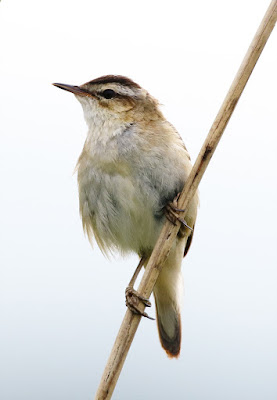 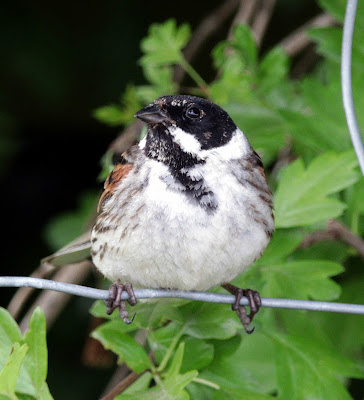 Reed Bunting
We were surprised by a small flock of Linnets that numbered 12-15, a little late in spring for Linnets to be in company rather than paired up for breeding. In other areas we found 3 Pied Wagtail, 3 Little Egret, 4 Tufted Duck and 8 Stock Dove. While not spectacular, and local birding rarely is, we found a good variety of birds and I guess more visits are on the card for the coming weeks.
Back home in the garden there are Greenfinches feeding chicks. Trouble is, the nest is high in a conifer where I would need a ladder and sky hooks to reach.  Probably better to stay safe at ground level?
Back soon with more from Another Bird Blog where the messages remain much the same – Enjoy All Birds, Stay Alert, Stay Safe, and Control Your Urge to Watch the BBC, C4, ITV or Sky.
You know it makes sense.
Linking this post to Viewing Nature with Eileen and Anni in Texas.