Lets face it....The reality is, my birding is on it's arse, and the blog heading for liquidation. But welcome e-mails and excellent photographs are gratefully received, and are keeping me up to date on things in and around the area....Please clik the piks

Conder Green.
There has recently been up to 55 Bar-tailed Godwit at Conder Green, a high count for the time of year, and a bird at best irregular here, and even rare on Conder Pool, I've not searched my records yet to find the last if there ever was one. Also seen over Conder Pool,  sightings of Arctic Tern are a new species in my records since I first christened 'Conder Pool' 17 years ago in 2003. 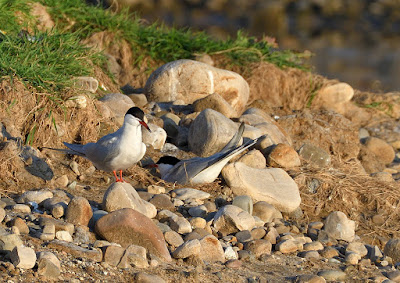 Common Tern Conder Pool 20 May Howard Stockdale
It was good news to hear the Common Terns had decided to leave the killer Black-headed Gulls - three breeding pairs - to the pontoon and set up home on the island....well Alleluia to that. No repetitions of last years horrific attack on the CT youngsters thank you very much.


I know three birders who have been to Bowland over the past few days, all have commented on the 'Stay Alert Stay Safe' hordes in the Tower Lodge area, with bumper to bumper parking in some spots, kids on the Marshaw Wyre throwing stones and building dams - well that's what kids do isn't it - but no good for the stream habitat of breeding Grey Wagtails, Common Sandpipers, and Dippers. 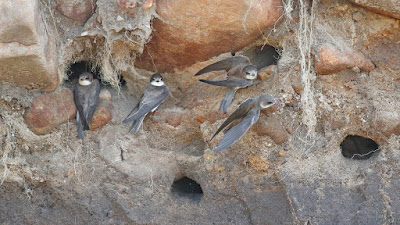 Sand Martin Cam Brow 20 May Martin Jump
All three birders have made notes to me about the Sand Martin colony at Cam Brow, where there are in excess of 30 nest holes in the bank above the stream where picnickers congregate to cause more disturbance to the birds, and where all three birders have had verbal abuse when they've tried to explain what's happening here regarding breeding birds. 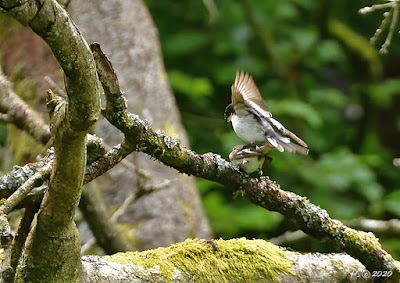 Pied Flycatchers 22 May Howard Stockdale
Great news that the Pied Flycatchers are breeding again at the nest box project, albeit just the one pair. This image is the first I've seen of the male at Tower Lodge this year, and having found a mate with obvious intentions to breed. I'm also hearing about a pair of Bowland Spotted Flycatchers nesting barely 2m up the trunk of a Beech, these birds nested in the same tree last year. Also, news of two confirmed Stonechat nests in Bowland was good, one in the trough and one at Abbeystead. 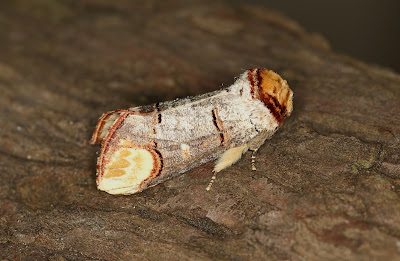 Nearer to home....A Buff Tip found in Bowerham, with folded wings it resembles a twig from the Silver Birch. The moth is regular in Ian's trap, all the same, it was a spirit lifter for me.

I'D SOONER BE BIRDING FIRST HAND!