Holme Wood ranks as one of the best woodlands I have ever visited, and I made an escape there to gain more Bowland therapy.

It was quite hot on Thursday, but despite the early date, I first checked out the brook running from Grizedale Bridge into the woods for Golden-winged Dragonfly to no avail, but I found six here 16 July last year when I also found 3 Purple Hairstreak in the Oaks here. I think a week or two might put today's failure right.

A Brown Hare was running down the road as I walked towards Holme Wood from where I saw 5 Small Heath, Goldfinch and Meadow Pipit with a nest close by, also a Pheasant with six chicks just out of the nest, later 3 Green-veined White seen. As I got close to entering the wood, a Nuthatch seen was feeding young in an Oak nest hole.

Once in the woods, the place was full of bird song and I noted 16 species on a circular walk through this pleasant woodland, including in order of seeing, a pair of Great-spotted Woodpecker, plenty of Willow Warbler song, a Grey Wagtail on the brook, a Song Thrush, Great Tit, a Spotted Flycatcher, 2 Goldcrest, 4 Blackcap heard as 3 singing male and a female which gave excellent views, a Chiffchaff, Treecreeper, Pied Wagtail, and a Dunnock. A Cuckoo was heard repeatedly somewhere down Grizedale Valley, and at least 4 Swallow were around the farm at Fell End as I returned back to the car. 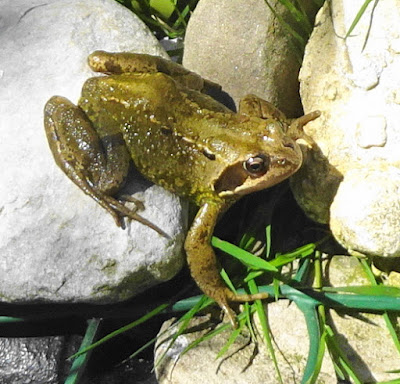 Garden Frog 31 May 2020. Pete Woodruff.
A video and image of a bit of a mystery organism found in our pond. I have no idea what it is or where it came from, but the video shows one of the creatures swimming, the other dangling from a 'thread' on the garden mesh over the pond.
View Full Screen 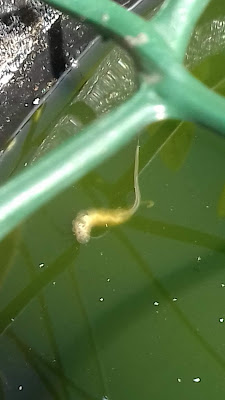 And a grab shot of the same.