There's a stranglehold on my birding caused by these Covid days, so I made another delve into the archives and found the second of my notes, this one published in the January 2005 issue of British Birds. By coincidence, on the same page in the same issue of the British Birds magazine, there was an article published by the then recorder for Lancashire and North Merseyside until 2000.
The Hunting Strategy Of Eurasian Sparrowhawk Accipiter nisus.
The note on persistent searching for prey by Eurasian Sparrowhawk in British Birds 96: 653-654, prompts me to recall an individual of this species which I observed at Leighton Moss in Lancashire, on 3 September 2003. The bird came into view in flight over one of the pools and perched out in the open on a dead branch. During the next 15 minutes, I watched this bird fly across the water to the reed edge, at distance of at least 150m in the direction from which it had first come, and without landing, turn and fly back to the same perch. It then repeated the same manoeuvre three more times, always taking the same flight path to the same area of the reed edge, and always turning without landing, to return to its original perch. On each occasion, flight was fast and direct, but noticeably not as rapid as it would have been when chasing prey. On its fifth flight, the hawk disappeared into the reeds at the precise point at which it had turned on the preceding four sorties, and emerged with a small unidentified prey item before flying off.

As far as I could see, this Sparrowhawk appeared to know that prey was hidden in the reeds, and if this was a planned method of hunting, it is on which I have never witnessed before and, on this occasion at least, was a successful one. 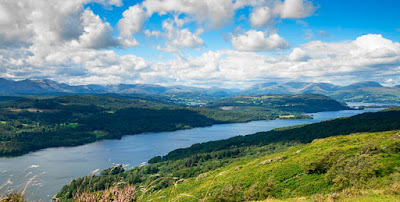 View Over Lake Windermere From Gummers How

F-15C 'Grim Reapers'.
I remember one day a few years ago, climbing to the top of Gummers How in the Lakes, and walking straight into these guys on a training exercise in their flying machines. All round excitement is a bit of an understatement in this video. Watch the man in the first few seconds of the film with No 8 on his shirt getting excited to have achieved the shot of freezing one of 'em....Pump up the volume.