Five in the morning and I lay wide-awake, mulling over the weekend gone and the days ahead. With another morning of waiting around for a promised delivery, I felt a rant coming on and sat at the keyboard with one eye trained along the road outside.
For three days we watched for a delivery that never arrived. But the neighbours' did. White Van Man and then another food drop as Sainsbury’s green one failed to stop at Number 3. I swear those neighbours are stockpiling the garage, cupboards and freezers for the next pandemic or the newest Project Fear, inspired by our unbiased and impartial but highly predictable media.
I have news for BBC, ITV, Channel Four and Sky - We, the public who pay your wages, know what you’re doing, your hidden agendas.  For sure it’s the re-election of President Donald Trump in November 2020 and Real Brexit of 1st January 2021 when the media’s EU funding dries up.
I left Sue on lookout Monday afternoon and snuck out to Cockerham for a look along the sea wall. Richard had newly fixed Covid signs to gateposts to deter social distancing doggie and cycle folk from their recent and ongoing trespass through his sheep and cattle. None had bothered to seek permission for their jaunts. So it continues - farmers versus townies and never the twain shall meet.
I had a good selection of birds where the pool, reeds and hedgerows provided the best. At least six singing Reed Warbler and three pairs of Reed Bunting proved easy to find by their respective songs. More difficult to see were now quiet Sedge Warbler, Blackcap and even Chaffinch, all of which by June have less need to display their desirability. 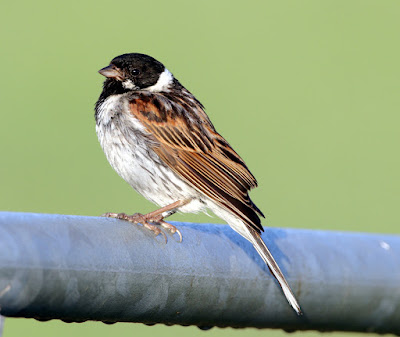 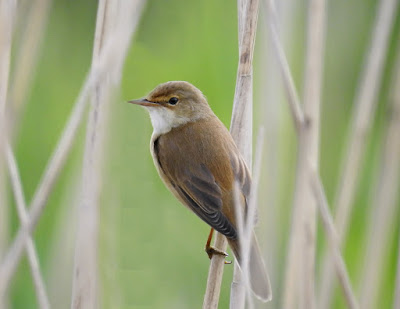 Reed Warbler
The water held several Greylag, Mute Swans with 2 young, 4 Tufted Duck, 2 Shelduck, the inevitable Little Egret, and whinnying but unseen Little Grebes. The grebes may be on their second brood by now because ten days ago I saw a flotilla of young and old disappear into the pool margins. 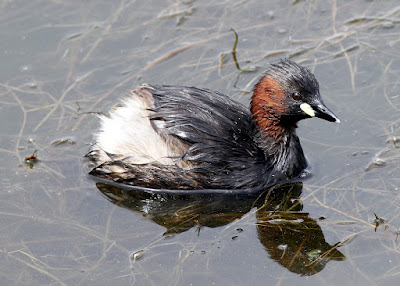 Little Grebe
Along the sea wall the Environment Agency had found work for idle hands whereby three x four by four vehicles and a JCB were sent to drive up and down the bund and shift tidal wrack a few yards higher up the sea wall. The story is that the lower down debris stops the growth of grass that binds the grass to the substrate which in turn maintains the strength of the bund. The bund/sea wall serves as a defence to high tides that might one day engulf the land behind. Mystified? Yes, me too.
Needless to say, I saw few Skylarks, the single species that actually nests on the same ground during May, June and July and along which the vehicles drove up and down for some hours. In several visits I have seen no evidence of Skylarks nesting along here this spring. I also think The Environment Agency could do with a makeover that includes a different title. 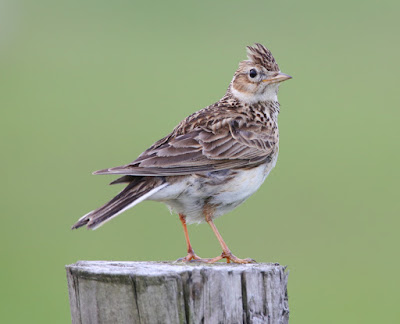 Skylark
Along the ditches and dykes came 6 Oystercatcher, 5 Redshank, 4 more Little Egret, a single Pied Wagtail and several Linnets. Out on the marsh were distant gulls, more Shelduck and 2 Eider ducks, male and female but as far as could tell, no young in tow. Half-a-dozen Swallows and a lone Swift drifted by.
I bumped into Richard, out to survey his barley, a crop struggling for height in this driest of springs. As we spoke a Roe Deer crashed from the dense hedgerow, bounded through the crop and disappeared out of sight.
Richard told me the family had not ventured out onto Murder Mile last weekend because they could see and hear the probable aftermath of release from lockdown. They were right to stay safe. Bikers hurtled full throttle along the A588 where 100 yards up from the farm another middle aged wannabe racer bit the dust by landing head first into the roadside ditch. Six kids and a wife left behind. Another needless death caused by the China virus.
I heard tell via the Internet that all three Avocet nests at Conder Pool had failed so motored on for a gander. Indeed all gone with not a one to be seen, least of all little fluffy grey ones. There’d been a little unanswered discussion online as to why the Avocets failed so miserably, perhaps sheep or mink, even though Oystercatchers and gulls yards away produced fine chicks?
No one seems or even wants to know except that grazing sheep or a mink might carry the unopened can of worms, but not bird watchers.
Luckily, another pair of Avocets half a mile away on a stony island encircled by comatose, immobile anglers succeeded where others failed. There they strode, three healthy looking chicks and two proud parents who for weeks saw off Grey Herons, gulls and Greylag Geese with no interference from trespassing birders. 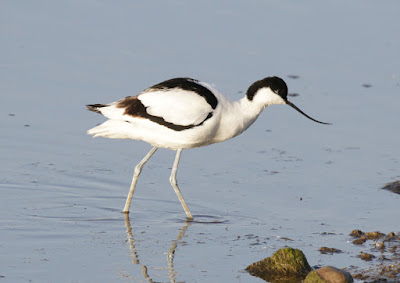 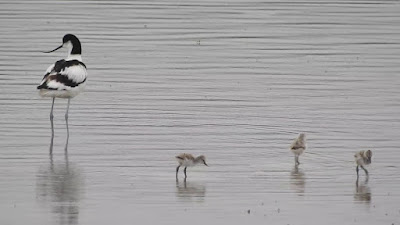 Avocets
We’re still waiting for the van. Watch this space.