Around and about, and goings on in the garden....The photographs will look even better if you clik the piks.
Conder Pool. 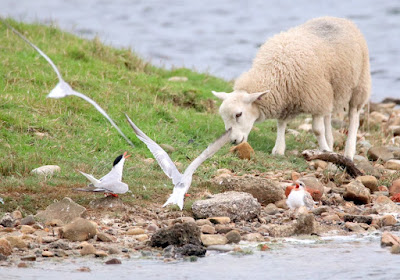 The Sheep Problem Conder Pool 2019. Pete Woodruff
It wasn't good news to hear a pair of Common Tern have suffered a nest failure on Conder Pool, but  good to hear the sheep have now been removed. Last year I had on good authority in a letter....'the sheep were not supposed to go on the surrounds of Conder Pool until late July to reduce disturbance to breeding birds'.

On a more positive note, a pair of Common Tern have taken up on the pontoon now, hopefully a pair of Black-headed Gull already breeding on there, will have fledged young before the terns have hatched, hopefully avoiding a repeat of last years horrific attack by the adult gulls, when the young terns were lucky to have escaped with their lives....just.

Interesting to note, the Common Terns had two chicks hatched on the pontoon a year ago yesterday on 13 June 2019. Despite the excellent spring weather, and May being the sunniest month on record, things are running late with the Conder Pool terns, but not as late as their first ever visit to Conder Pool, when they didn't arrive here until 2 July 2014. 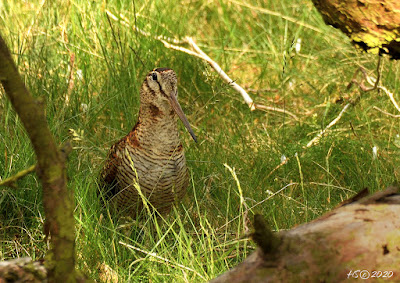 More good news received from a favourite haunt of mine was a Woodcock at Marshaw. I had two Woodcock here on 21 February 2018, and previously saw two more in the plantation behind Tower Lodge on 18 March 2015. 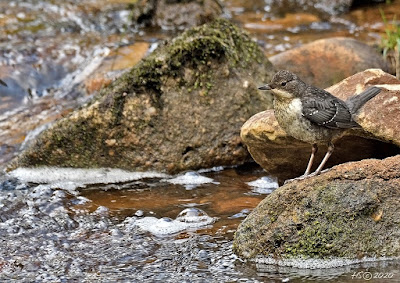 Dipper Juvenile Howard Stockdale
A juvenile Dipper and Common Sandpiper were seen on the Marshaw Wyre. 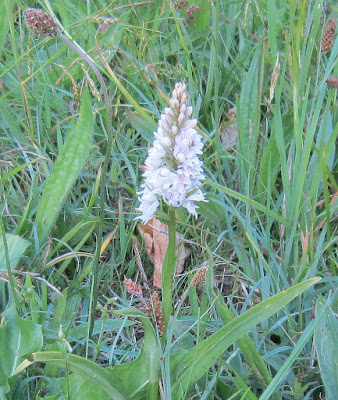 Common Spotted Orchid. Pete Woodruff.
The wander with KT for an update on the local orchids was rewarded by up to 44 spikes of Common Spotted Orchid including this variant white. No sign of any Bee Orchid yet, flowering from early June. I'm beginning to wonder if 2020 isn't going to be a year for them here. A couple of butterflies were braving the not too perfect weather, a Red Admiral and the Meadow Brown was my first of the year.
From The Garden.
View Full Screen
Our now resident Carrion Crow was joined by relatives this week, with six being on the rooftops opposite one day. I can't work out what's going on with these birds hanging around a residential area, particularly the resident bird been here two months now.
Three pairs of Blackbird visit our garden daily, and we've had two new young in the garden this week, so four to date is a good result this year, also a young Dunnock was a welcome sight, the adults have been around all year. The Coal Tit still continue to entertain, collecting seed from the feeder and burying them all over the garden and beyond with their amazing behaviour, the pair emptied the sunflower feeder in a day. I watched them this morning whilst having my 'snap, crackle, and pop', one of them flew from the feeder to the same area of the garden twenty times in ten minutes non-stop.
Thanks to Howard Stockdale for the much appreciated e-mail this week, with news and images attached.