This has been a disastrous time for the small number of Avocets that nest in their usual location of Conder Green, where this year, three or more pairs failed to rear a single chick. On Monday I drove to Cockerham to check out the remaining pair of Avocets that nested at a different location for the very first time - the perhaps unusual setting of a private and working dairy farm.
From a fair distance away I noted the Avocets had four tiny young in tow so I arranged to meet with Andy on Tuesday with a view to ringing those chicks and to combine this with another go at the nearby Sand Martin colony. Both jobs would require two pairs of hands and eyes should the young Avocets be difficult to locate through their parents’ ability to divert and disrupt. Sand Martin catches can be unpredictable in numbers whereby it is also essential to have two or three pairs of hands around.
Tuesday morning and we met up at the Sand Martins to see the whole of the Avocet family just yards away from our parking spot and to hear the warning ’kleet-kleet’ calls of the adults. Before long we had four youngsters in the bag despite the “broken wing” distraction displays and overhead warning flights of the adults. Four ringed - the first Avocets for Fylde Ringing Group. 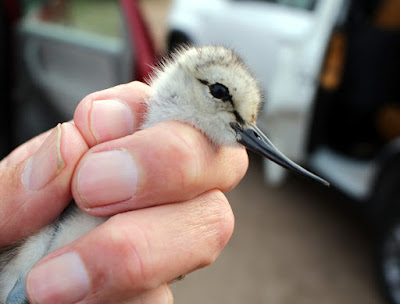 Avocet
A look in the BTO Migration Atlas (first published in 2002) showed the Avocet - Pied Avocet Recurvirostra avosetta as being featured in the pages of “Minor Species” rather than “Waders”. This is a reflection of the species status at the turn of the millennium when the population of the UK was at about 450 pairs. Avocets had recolonised Britain over 50 years earlier from 1947.
They spread quite slowly to include North West England in their range in the 1980s and 1990s and first bred in Lancashire in 2001. The number of Avocet breeding pairs in the UK in 2020 is thought to be now close to 1,950/2,000 (BTO).
It is known that Avocets from Southern England join post-breeding moulting flocks of Avocets in the Netherlands where they mix with birds from Sweden, Denmark and Germany. As winter progresses individual birds move further south to wintering sites in southern or southwestern Britain, e.g. the Tamar, Tavy and Exe estuaries. Yet others may fly south to Portugal, Spain, Morocco or West Africa.
Our North West England Avocets are winter absentees but return as early as late February/early March to look for breeding opportunities. It is likely that these individuals have spent recent months in southern England rather than being Africa returnees.
So little is known about Lancashire and Merseyside Avocets, an area where very low numbers have been ringed, that more ringing records and recoveries should add to the current understanding of the movements and migrations of the species as a whole. 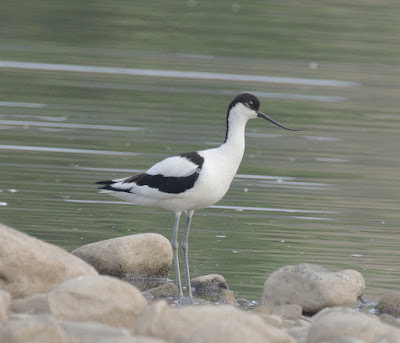 Avocet
While we counted around 140 Sand Martins at the colony the catch of just 13 was disappointing- 10 adult males and 3 juveniles of the year. The ten adults included a ring not of our own series - APA6004. 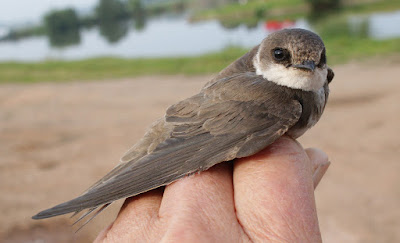 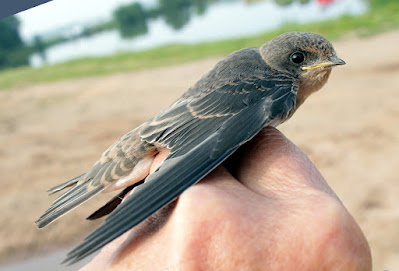 Sand Martin
We had no recaptures from our previous one of 30 Sand Martins on 30 May when twenty of those were adult males. It would appear that the ladies avoid us and that the resident birds as a whole have in a short time, learned to negotiate our mist net. 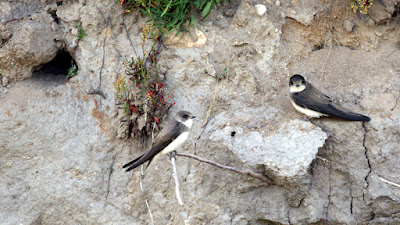 Sand Martins
We will leave them to get on with it for a while and try to time our next visit for a more substantial result.