Yesterday morning when finishing off some survey work in Greater Manchester, I realised I had the wrong rucksack with me, and this prevented me from getting a cracking photo of a very confiding juvenile Kestrel!

This survey site is small, and therefore I didn't need to take a flask of coffee with me, or a few snacks in case I got peckish, just a bottle of water and a banana would do. So, I took my smallest rucksack, hoisted it on to my back, and slung my camera and case around my neck. Hang on, that didn't feel very comfortable. The waist straps of this rucksack meant that my camera didn't hang right off my shoulder, and kept swinging forward and getting in the way. I put my camera back in the boot of my car, set off, and thought there would probably nothing to photograph anyway.......

I was walking across a recently cut meadow, and in the middle of this meadow two public footpaths intersect, and this intersection is marked by a way marker. On top of this post, which incidentally was only about four feet high, I could see a bird perched. I lifted my bins and could see a juvenile Kestrel, all looking fresh with its pin-sharp, new plumage. No worn feathers here, just the beauty of unblemished shades of brown, beige, grey and cream. I looked at the Kestrel and it looked at me. I dropped my bins and walked on.

Still the Kestrel sat on the post, and I lifted my bins once more, and drank in again the freshness of its plumage. I could almost smell the newness of this enchanting little raptor, and was entranced by the perfection of its form.

I carried on, and still it didn't move, and now I was only about fifteen feet from the bird. I instinctively felt for my camera, but it wasn't there, and I remembered I had left it behind because I had the wrong rucksack with me! I would have got a beautiful frame filling picture of it, but maybe that's why it was so confiding. Another step closer, and it was off, flying low across the meadow and over a hedge.

So, in celebration of this little chap I have posted below a few pictures of Kestrels that I have had the pleasure of encountering over the years. 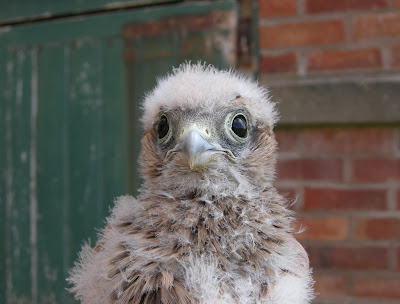 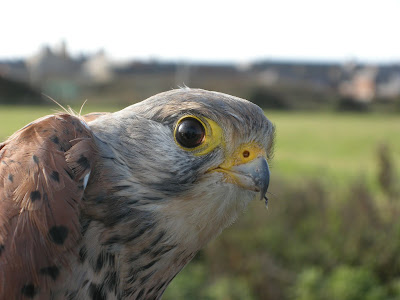 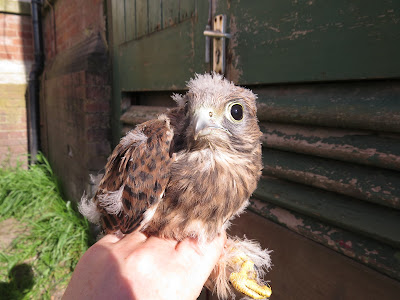 Back to my survey in Greater Manchester under leaden skies. I had been trying to get this survey in, for at least ten days now, but every morning it was wet. And if it wasn't wet, it was windy. This morning I just had a couple of hours to complete the survey before the rain set in.

The low cloud, with showers scudding across the landscape in the distance, brought in a few Swifts; nineteen to be precise. These jet-propelled, scythe shaped avian projectiles, were taking advantage of aerial insects brought down by the low cloud. They were a joy to watch as they cut through the air with stiff, swept back wings. Four House Martins and a couple of Swallows accompanied them, to add some metallic blues to the grey back-wash of the morning.

There is a small area of wetland at this site, and emanating from it, was the 'reeling' song of a Grasshopper Warbler. Grasshopper Warblers have a strange song, as their name suggests they sound a little bit like a Grasshopper, but actually their song is more like the whirring noise made by a fishing reel. It is sometimes hard to pinpoint exactly where they are singing from because they are master ventriloquists, and can throw their voice. They do this by moving their had side to side when singing, giving the impression that the song is coming from all directions.

Grasshopper Warblers always make me think of my dear, departed Mum. My Mum grew up in County Down in Ireland, in a small fishing village. Just outside the village, along a road called Dunover Road, is a Dun. A Dun is an ancient or medieval fort, and along this road in an adjacent field was an example of such a fort. My Mum was fond of ghost stories, and she said that on a summer's evening, close to the Dun, you could hear the noise of a treadle sewing machine whirring away.

She had heard this noise herself, and the story was that the noise was the restless spirit of a long-departed lady, forever doomed to sew away across the centuries. Now, the Dun is surrounded by a tangle of dense vegetation, and I don't doubt that it will also be wet in places, so perfect habitat for a Grasshopper Warbler! And 'Groppers' are best heard in the still, dense air of evening or early morning. I once played Grasshopper Warbler song to my Mum, and she agreed it sounded like the noise she had heard. But I think she still believed in the old tale of a ghostly maiden, forever bound to the Dun.

The supporting cast on this morning included eighteen Woodpigeons, with seven attendant youngsters, a Willow Warbler (scarce this year), a singing Blackcap, a lovely flock of 22 House Sparrows close to some adjacent houses, an over-flying Siskin and a pair of Reed Buntings from the 'Gropper' wetland.

I'll finish off with a few pictures taken in my garden, during a sunny interlude, of some Buff-tailed Bumblebees and Common Carder Bees. A splash of colour and loveliness! 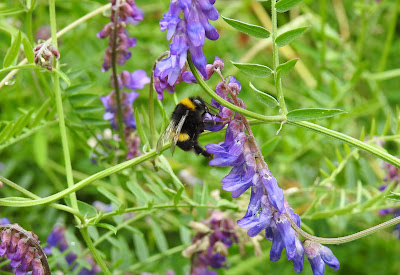 Buff-tailed Bumblebee (above & below) 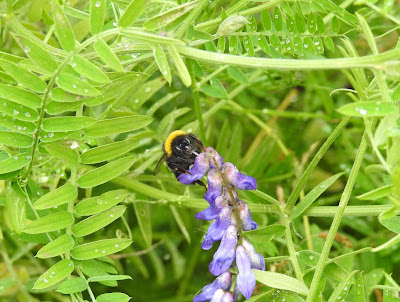 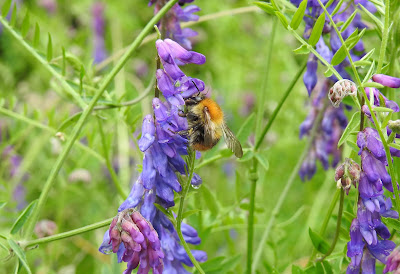 Common Carder Bee (above & below) 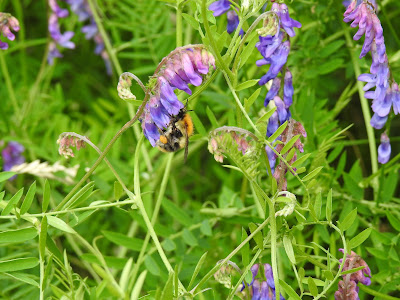