Saturday was cool, blustery and showery just like the week gone by when there was no birding and no ringing. Hopefully the showers would not turn to rain and I could at least get a little birding done.
With so few Swallows of late one could be forgiven for thinking they had all left for Africa with a cold arctic wind up their backsides. Not so, because at Conder Pool many hundreds of mainly Swallows converged on the morning hatch of insects. My approximate count was of 450 Swallows, 40 Sand Martins and 30 House Martins which swarmed along the north bank in the lee of the hedgerow, across the water and over the island’s vegetation for two hours or more.
This feeding frenzy is a regular autumn occurrence now the waterside hedgerow is mature enough to hold large numbers of midge and mosquito type insects - little critters that we call ‘gnats’ or ‘flies’, some of which are actually mosquitoes.
Yes, I heard them this morning and “mozzies” are definitely in Lancashire. I’ve seen, heard and then squashed enough mosquitoes in Africa, Asia and the Med to recognise the sound of their landing approach.  It was so satisfying to hear the snap of the Swallows’ bills as another enemy bit the dust a yard from my face and to watch as thousands more perished in the birds’ onslaught. 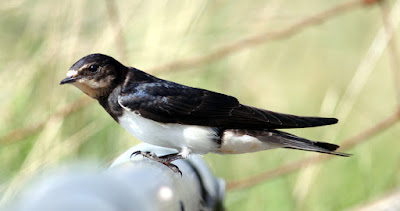 Swallow
Buoyed up by the merciless carnage I periodically turned my attention to other birds present and their less obvious need to eat at the pace of early morning hirundines, creatures who spend dark nights balancing on draughty reed stems.
In 1981 in North Lancashire I saw my first Little Egret, a species that very quickly found a niche, swelled in numbers and is now so ubiquitous that it can be seen 365 days of the year, winter, spring, autumn and summer.  This species should by now be renamed as Common Egret, rather like Common Man - the average citizen, as distinct from the social, political or cultural elite.
These delicate little diners eat mainly fish, with at times amphibians, small reptiles, mammals, crustaceans, molluscs, insects, spiders and worms. There were three egrets today, and as I watched they seemed to prefer the tiny fish that inhabit the pool, but mostly the prey would be swallowed in the blink of an eye before it could be named.
Eight Little Grebes took their prey under water but when one emerged carrying a ready meal it was invariably the same minnow the egrets take.
“Minnow is the common name for a number of species of small freshwater fish, belonging to several genera of the family Cyprinidae.” 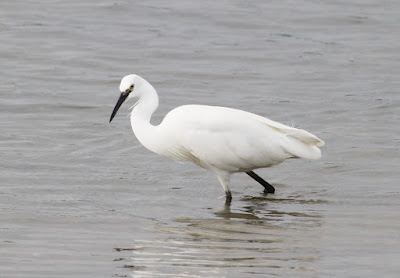 Little Egret
To their credit, our local Mute Swans appear to be vegetarian. But, like many a “veggie” they occasionally, and entirely by accident, when no one is looking, have been known to sneak the odd meaty mollusc or worm. 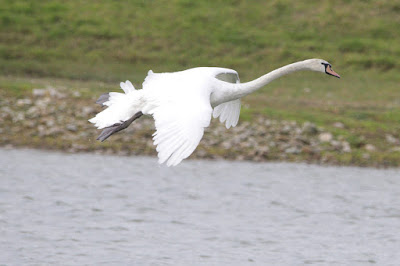 Mute Swan
Waders and wildfowl were of the usual variety and numbers with 40 Lapwing, 20 Redshank, 15 Curlew, 3 Common Sandpiper, 1 Greenshank, 6 Tufted Duck and 40 Teal.
Those Curlews can be missed when they feed amongst this year’s grasses, grown tall and lush in record rains. I suspect that beneath the puddles lay soft soil containing goodies that curved, probing bills could easily find. 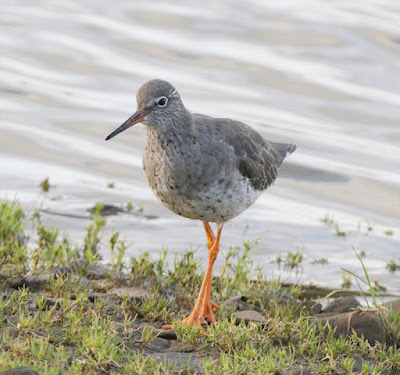 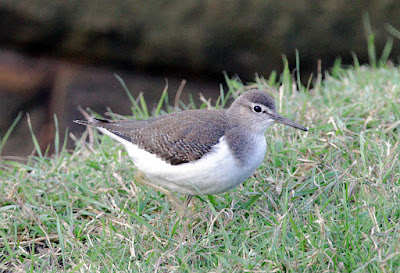 Curlew
It was good to see a flock of 50/60 Goldfinches feeding in both the marsh grass and on the dandelions and thistles. Good to see because Goldfinches have been strangely absent from my own garden for weeks, not unexpected when there is much natural food about. 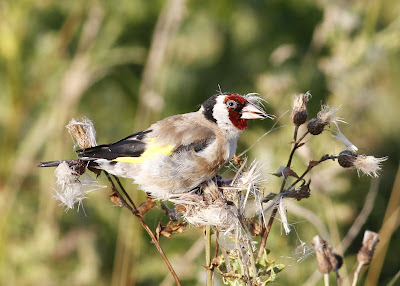 Goldfinch
That’s all for now.  I’m off to prepare a chicken tandoori with salad. There's more food for thought soon on Another Bird Blog.