The mornings are dark and alarm calls getting later. The buzzer woke me at 0530, enough time for the essentials before a timed to perfection drive over switchback moss roads and up to Oakenclough. That’s thirty minutes early morning and forty minutes on the way now that road traffic is back to pre-virus levels.
I met up with Andy at 0630 to a dry, mostly cloudy and virtually wind-free start. This was looking good. We gave the hatchbacks a miss and set up the ringing station at a table thinking that there would be more room to work if the morning proved busy. And a space for coffee flasks. 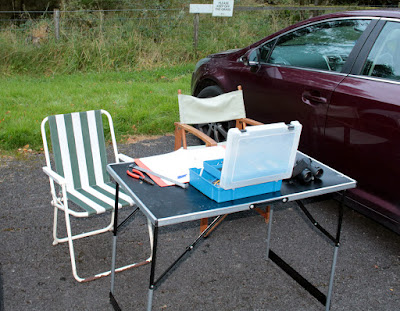 Ringing Station.
Small parties of Swallows were on the move from very first light. When we finished ringing at 1130 we’d counted approximately 125 Swallows, 30 House Martins and 15 Sand Martins all of them heading east and south. Otherwise there was very little visible or obvious migration and we were left wondering from which direction the Meadow Pipits and most other species arrived. Mostly and from our viewpoint we see birds arrive overhead from a northerly direction and where on clear days we can see Morecambe Bay, Lancaster City and other landmarks
We totalled 52 birds of 11 species: with autumn birds with the above mentioned pipits, Goldcrests and Chiffchaffs to the fore: 17 Meadow Pipit, 9 Goldcrest, 7 Coal Tit, 7 Blue Tit, 5 Chiffchaff, 2 Blackcap ,2 Great Tit, 1 Willow Warbler, 1 Lesser Redpoll, 1 Treecreeper.
Meadow Pipits breed in the surrounding hills, dozens if not hundreds of pairs, but the ones we catch during the prime migration period of September are from further afield; they probably originate from the North Pennines, Scotland and the Northern Isles. 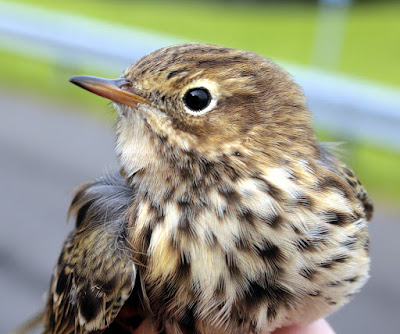 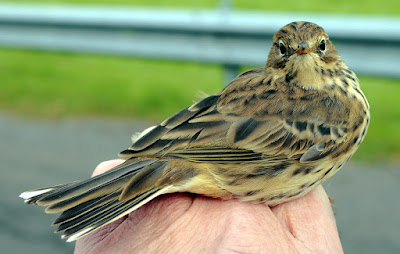 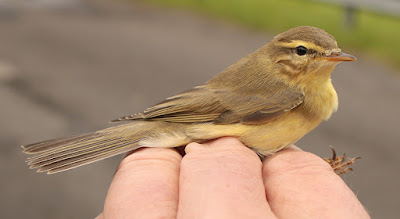 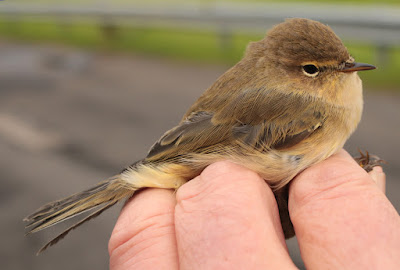 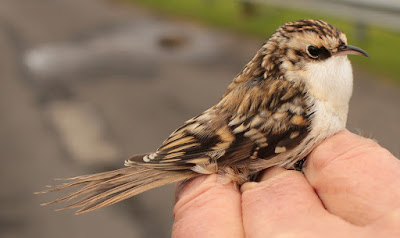 Treecreeper
We caught more Blue, Great and Coal Tits than we normally do so a Treecreeper did not surprise us.  Treecreepers often latch onto and travel with groups of titmice because all four species eat much the same foods.
We continue to catch Blackcaps and should do so but in lesser numbers into October. 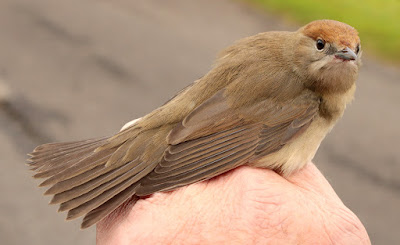 Blackcap
Lesser Redpolls continue to be scarce, just as they were in spring 2020 and the autumn of 2019. The one today and on close inspection, proved to be a first autumn female. 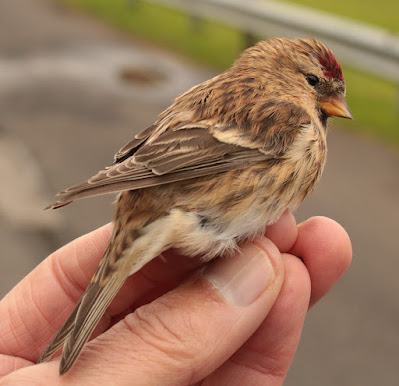