At last a half decent morning without that nagging breeze, a chance to go ringing at Oakenclough where at 0630 I met up Andy and Dave.
Our catching was steady and on the slow side. It was dominated by the finches and signs of early returning birds with the recaptures of a Lesser Redpoll and a Siskin. The Siskin was first ringed 11th February 2016 and the Lesser Redpoll first ringed 25 March 2015, so both early springtime birds but neither of them recaptured in the intervening periods.
Total birds processed 23 of just four species, including the two recaptures: 9 Goldfinch, 5 Siskin, 3 Lesser Redpoll, 3 Chaffinch and 3 Dunnock. 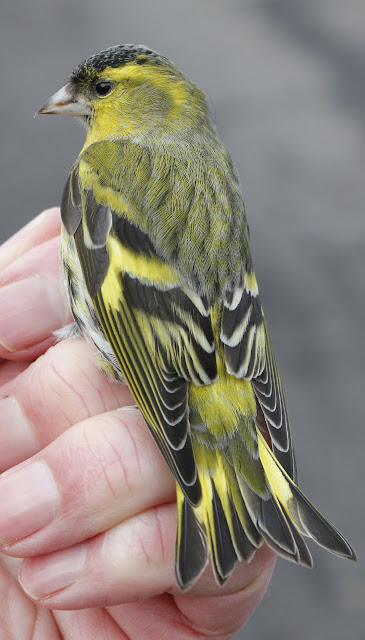 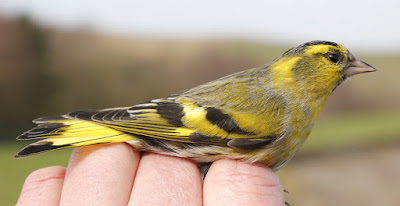 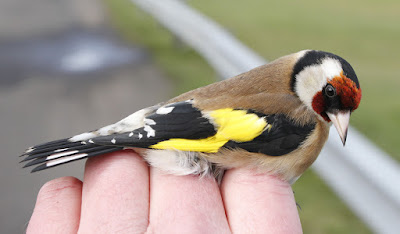 Goldfinch
Lesser Redpolls can vary in colouration with some individuals showing greyish tones with whiter wing bars than a typically brown example. They are however not to be confused with Common Redpoll which is always bigger and longer winged.
Top and bottom below are an adult female and an adult male respectively.  In the centre is a first winter male Lesser Redpoll that is greyer than the average, especially on the mantle and the underparts.  The adult male is the recapture from today, first ringed here on 25 March 2015. 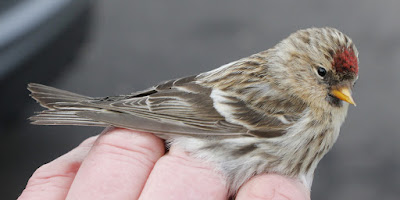 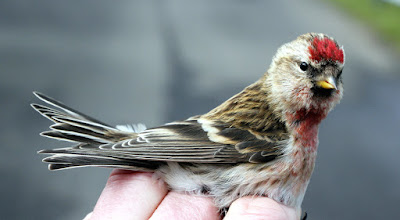 Lesser Redpoll - adult male
Other birds seen during the course of our ringing: 3 Buzzard, 1 Sparrowhawk, 2 Grey Wagtail, 2 Pied Wagtail, 2 Bullfinch, 1 Chiffchaff, 1 Goosander, 1 Mistle Thrush, 1 Song Thrush.
On the subject of Lesser Redpoll. A week or so ago and quite by accident I discovered that the Lesser Redpoll is also alive and well on the other side of the world - in New Zealand. This all began when a fellow ringer (bander) in New Zealand contacted me after reading about Lesser Redpolls on this blog. Being a curious sort I delved further and discovered that New Zealand hosts a large number of birds that were introduced from other countries, mostly by UK and other European settlers during the mid-1800s to the early 1900s.
The reasons for introductions were the same as those in the transportation of non-native birds to North America and other continents like Australia - the settlers missed the sight and sound of birds from their homelands, mostly birds of the then rural landscape.
The list of European species on the other side of the world may surprise you as it did me; as it includes species like Little Owl, Rook, Blackbird, Song Thrush, Chaffinch, Greenfinch, Goldfinch, Lesser Redpoll, Yellowhammer, Cirl Bunting, Starling, House Sparrow and Dunnock. 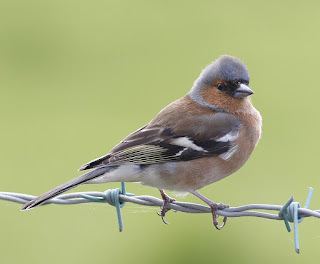 Chaffinch
A hundred and fifty years later less than a third of the species introduced managed to survive and breed in the wild, but some that did are now among the most common birds in New Zealand, especially the Lesser Redpoll.