At last, after delays caused by the coronavirus here on my desk is a brand new bird book I’ve been looking forward to read; The Gull Next Door by Marianne Taylor, a freelance writer, editor, illustrator and photographer specialising in natural history subjects. On sale now from Princeton University Press. 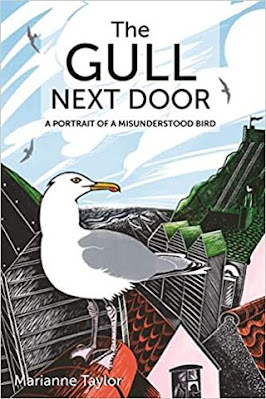 The Gull Next Door - Princeton Press
The author promises that The Gull Next Door ‘will explore the natural history of gulls, their complicated relationship with humans and delve into how we might live more harmoniously with these misunderstood birds’. Marianne set herself an almost impossible task because here in Britain the gull next door became the definitive Marmite bird when gulls abandoned the ocean to become urban scavengers living in the house next door.
I realised from the very first paragraphs of The Prologue that The Gull Next Door is a one sided love story, perhaps a Mills & Boone that could be subtitled Love Thy Neighbour? Marianne loves gulls in all their sleek, stylish shapes and forms and is willing to forgive gulls’ boisterous, bickering, noisy, messy and thieving ways. To balance the books she reminds us through many examples that gulls have perfect parenting skills and that amongst other attributes they are adaptable, intelligent, ingenious, fearless and resourceful.
Gulls are not the creatures despised by Joyless Jobsworths of local councils who prosecute those who dare throw a chip to a “seagull’. Gulls are not the evil “seagulls” that terrorise Old Aged Pensioners and their Chihuahuas as depicted by lazy newspaper hacks.
N.B. I digress to insert a pet hate of my own. There is no such thing as a “seagull”, a word with no fixed taxonomic meaning. But there are more than 50 distinct and separate species of gull in the world - seabirds of the family Laridae. I struggled to find Marianne using the dreaded word once other than to simply quote its misuse elsewhere. Three cheers for that Marianne!
Back to the book where Chapter One takes the non-birder on an entertaining but brief discovery of gulls that occur in Britain. These are often highly personal recollections, descriptions and humorous observations helped along by a measure of scientific insight and research. The segments begin with the ubiquitous such as Black-headed Gull, moving on to the scarce as in the Not so-common Common, the giants like Glaucous and end with the simply mind blowing beauty of Ivory and Ross’.
Chapter Two explores the lifestyles, the natural and unnatural history of gulls, where necessary quoting scientific research and facts rendered to an accessible format so as not to frighten off seat-of-the-pants minds like my own. For instance, research in 2015 suggested that gulls follow a series of “smell posts” as they navigate their sometimes long European journeys. In this chapter Marianne also tells the remarkable story of small Herring Gull chicks being fed and fostered by Peregrine Falcons. She describes the Kittiwake colony of Newcastle upon Tyne some 13 kilometres from the sea as an example of the adaptability of gulls.
Chapter Three is devoted solely to the Herring Gull, the one us Brits love to hate - except Marianne. Her upbringing in an English seaside town gives her a lifelong and sympathetic admiration for the much-maligned villain of the red top newspapers. But in reality the declining Herring Gull population is just 280,000 adults sharing the nation with 68 million or more humans.
Chapter Four, Gulls and People, follows in similar style with apocryphal, sometimes comical tales about “seagulls”, real and imaginary. Like the Daily Mirror’s “Public Enemy Number One” and similar lies, stories that strangely enough always seem to include the County of Cornwall. Those irresistible Cornish pasties and Rick Stein's chippy have a lot to answer for in promoting the myth of hordes of urban bandits.
The next Chapter, Gulls in Word and Image is a historical and present day summary of gulls in myth and legend, literature, film and popular culture through our complicated human eyes. “Gulls are dangerous, portentous, violent, greedy irritating, foolish, wise, helpful, beautiful, curious and talented.” That is how humans see gulls - in a mirror image they fail to recognise.
Chapter Six tackles the strange obsession of Larophilia as distinct from mainstream media’s clickbait obsession with Larophobia. Many birdwatchers, “gullers” to give them their correct title, have a specific interest in gulls. They are obsessive about gulls and will travel many a mile to see one. Gulls display a sometimes puzzling assortment of plumage - large gulls can be very difficult to identify and to age. A certain type of birder is captivated by the challenge a gull presents and seeks the kudos of successful ageing and identification. As Marianne explains that being “good at gulls” invokes a certain type of respect for a level of skill higher than that of most ordinary birders.
Chapter Seven- Moving On reminds us that the earliest gull fossils stretch back at least 23 million years - some 13 million years before hominids. Gulls are almost certainly better equipped to survive the next extinction. 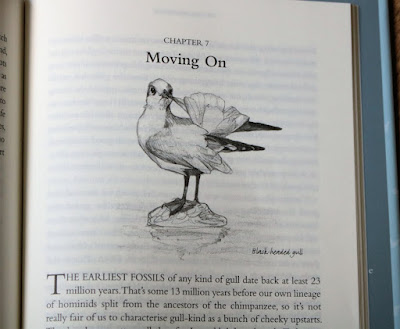 The Gull Next Door - Princeton Press
Dear Reader, I suggest you remember the numbers and hope that gulls are around for your ancestors to enjoy in amongst the changing grand scheme of things.
I loved the humour and the idiosyncrasy, the quirkiness of this brilliant book. There’s something for everyone here - the birder, the larophile, the curious, the uninitiated, the anti or the pro, the scholar, or simply the seeker of a good read.
Most of all The Gull Next Door is a celebration of everything gull. Have a read and enjoy. You will not be disappointed. You may even begin to love gulls as much as Marianne. 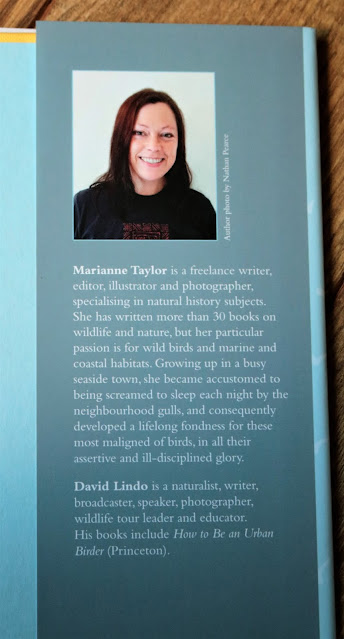