Like a lot of wintering bird surveys, where the land being surveyed is potentially functionally linked to a Special Protection Area (SPA), Vantage Point (VP) counts are required both over the high and low water periods for each month surveyed. One of my wintering bird surveys requires such counts, and earlier this week I had the opportunity to compare both.
This particular site isn't overly exciting, but when I was there at the beginning of the week the influence of the Spring tide was obvious, as the 10.0 m tide pushed birds inland. At my second VP at this site, I recorded 312 Lapwings, 31 Redshanks and four Snipe. At the same site, and VP, three days later over a low tide, I recorded just 2 Lapwings. This pattern will be repeated throughout the winter, and it will be interesting to see how the numbers and species' composition change. 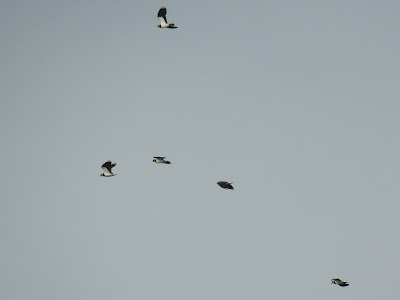 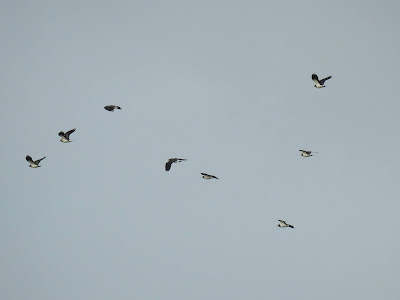 Rewinding back to the start of my survey at the beginning of the week, my first VP location was over an area of rank grassland with adjacent scrub. I didn't record anything from/over the rank grassland other than two Grey Wagtails that chased each other past me.
A few birds were in the scrub, and first up was a male Great Spotted Woodpecker perched high up in some Birch. A male Sparrowhawk shot into the scrub, with one of those disappearing acts where you thought "did I just see a Sparrowhawk"? A party of ten Long-tailed Tits, like monochrome pom-poms, bounced from branch to twig, and bush to tree, and away past me, like a flurry of snow; magic. Two Mistle Thrushes were the only other species that made it into my notebook from this particular section.
Raptors were thin on the ground throughout the morning, and all I could add to the Sparrowhawk was a Kestrel later in the morning. 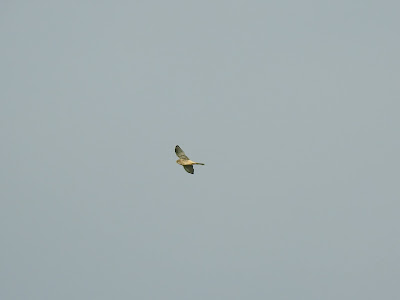 Distant Kestrel
My low water count later in the week kicked off with two male raptors, a Kestrel and Peregrine, but it never really got going. Two Mistle Thrushes and three Redwings were noteworthy, as was a calling Reed Bunting from a small area of reed. Two further Mistle Thrushes, and their Song Thrush cousin, and two more Reed Buntings were recorded from a different section of survey.
Part of my survey includes an area of scrub covering a section of former buildings, now demolished, and associated Bramble covered concrete areas. Every time I climb the gate and walk across this area, I always put up two or three Snipe, and today was no exception. This is the third time that I have walked across this bit and put the Snipe up, so it is obviously a day-time roosting spot for a few individuals.
The weather has been pretty awful of late, and I have struggled to get out, but it is looking a bit more settled later on next week, so hopefully I can do a bit, and maybe also get some ringing in at my Bowland feeding station.