Standing still is something that I do a lot of, particularly when out working undertaking bird surveys, especially if vantage point (VP) counts are involved. One of the things that I like about standing still for some time, is that the birds, and other wildlife, will come to you. I have a wintering bird survey site in west Lancashire and this includes two VP watches, so I have a lot of standing still going on there.
The site is mainly arable farmland, with over-managed hedges, but there is a pond or two, a strip of woodland, and a wet marshy area of about nine hectares. This wet area has obviously been too wet, and expensive, to drain in the past, so it has survived. I'll refer to this area as 'the marsh'. 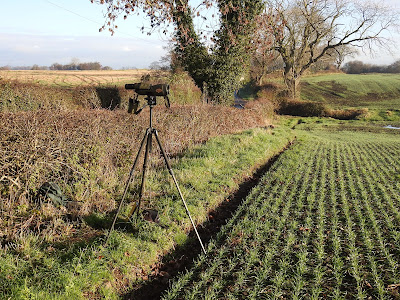 You can see the typical habitat from this picture of my second VP location
I would love to have stood in area like this a hundred years ago or more, to see what wildlife approached me. The marsh would have been a lot bigger then, and the arable land surrounding me would have been winter stubbles rather than the winter wheat that it is now. It would have been thriving. Now the landscape is denuded of biodiversity, but nevertheless standing still, does afford some interactions with what is left of the local wildlife.
During this past week I have visited this site three times, and over the winter between now and early April, I will visit it a further nine times, so it will be interesting to note what I see. Below are a few highlights of what I observed over all three visits just by standing still.
Raptors have been present this week, and a couple of the local Buzzards and a male Kestrel have caused havoc with the large-ish flock of Woodpigeons (300+) feeding in a large stubble field behind my second VP. However, my best raptor sighting was that of a female Marsh Harrier, that spent an hour one morning hunting over the marsh. She quartered back and forth, turning on sixpence, and dropping into the vegetation, presumably on prey. Buzzard
Talking about the marsh, I don't doubt that it was stuffed full of Snipe. As I walked along the edge of it and an arable field, I put up nine Snipe, and I imagine that if I could have walked across it, I would have recorded ten times that number, with an odd Jack Snipe thrown in for good measure.
One morning from my first VP closest to the marsh, I had a Green Sandpiper drop in and this was against a backdrop of calling Teal and at least two squealing Water Rails. Not bad for a small inland marsh. 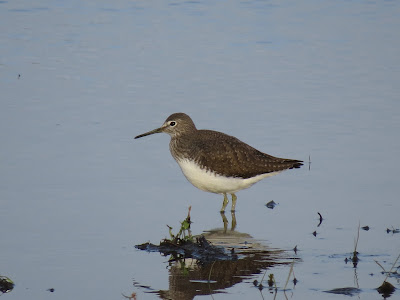 Green Sandpiper
In a couple of fields some Starlings were feeding, and I had 713 in total. Accompanying them were a few winter Thrushes, in the form of 85 Fieldfares and 28 Redwings. A Song Thrush and a Mistle Thrush added to the Thrush tally.
I expected to see more Pink-footed Geese flying over, heading to foraging areas from their coastal roosts as my surveys were from first light, but I only had 189, and a single Whooper Swan headed south one morning. 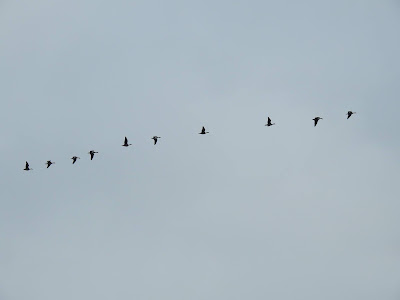 Pink-footed Geese
I was joined by another Ecologist one morning, and we watched a Grey Heron fly over. He commented that he liked herons because they are the most 'dinosaur looking' of birds! And he is right. Talking of how birds look, I picked up a wader in the distance flying towards me and it looked odd. When it got closer, I could see that it was an Oystercatcher with an extended down-curved upper mandible. It was obviously not causing too much of a hindrance, as it must have managed to feed and survive thus far.
Two days running I could hear, and see the odd Long-tailed Tit flitting along one of the hedges and the edge of a strip of woodland, but it wasn't until this morning that I could finally count them. They came along the hedge that I was standing in front of, and I positioned myself between two Ash trees and counted fifteen bounce by. Cracking little birds!
The best of the rest included a Grey Wagtail, three Stock Doves, 20 Lapwings, two Great Spotted Woodpeckers, two croaking Ravens and a couple of Goldcrests. Not too shabby for standing still in some fairly typical farmland habitat.
Fingers crossed for some ringing at my Bowland feeding station on Sunday, and if the weather plays ball perhaps a look on the sea tomorrow. I say if the weather plays ball, because for both days the dreaded 'black cloud' is forecast, and generally that means rain. But we'll see...