Most unusual - there was hint of the white stuff this morning when Andy and I met up at Gulf Lane at 0830. The temperature gauge read 1° but it felt warmer in the already rising sun.
Three days earlier we’d cut a square from the now defunct seed crop in preparation for a first catch of Project Linnet 2020/2021. We left a mix of rape seed and millet on the bare earth and crossed our fingers. The autumn had seen very few Linnets so far when a typical late November flock here should number 200/300 individuals. When we returned to our cars ready to leave only then did we note a flock of 40 Linnets in the tree tops of the nearby farm. That gave us hope for the days and weeks ahead, more especially for this Tuesday and the promise of a sunny morning. 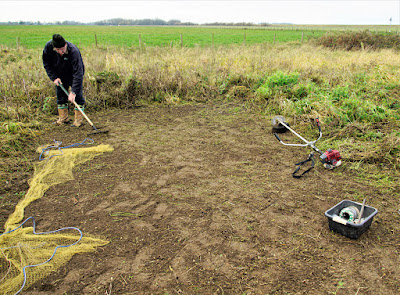 Prepping The Square
And then on Sunday I checked if the seed had been found. Indeed it had, not by Linnets but by the predictable Wren and a party of 8 Stock Doves. There was the unexpected bonus of a pair of Stonechats but yet another dismal grey morning when a tiny Stonechat half way across a field presented a difficult target for a camera. 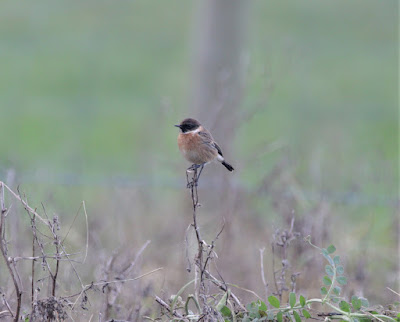 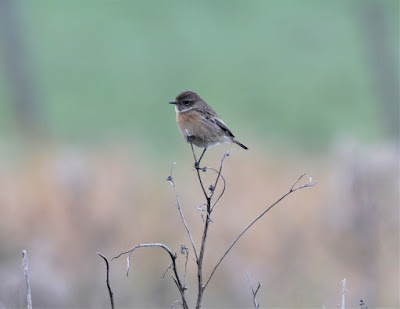 Stonechat
We had a similar count of Linnets this morning with 40 or more doing their usual flypasts without committing to landing in the target area. We caught the female Stonechat, but not the more wary male. We aged the female in the hand as a first autumn/winter. We had nothing else but felt that our effort of a few days earlier paid dividends in preparing the ground for better luck next time when Linnet numbers increase. 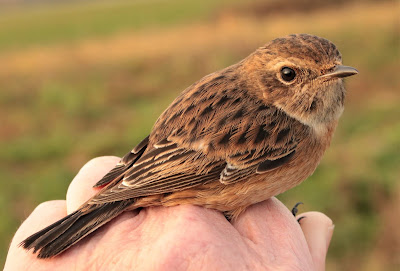 Stonechat- first winter female
Very little is known about the Stonechats which appear in this part of Lancashire during late autumn and early winter. Sometimes they stay to winter, other times not, depending upon the severity of January to March. It is likely that they are representatives of the partially migratory cohort of Scottish and Northern English Stonechats that breed in the upland fells but move to warmer climes at signs of cold weather.
It is almost certain that they are different individuals from the small number of Stonechats that breeds at our coastal localities in the summer months. 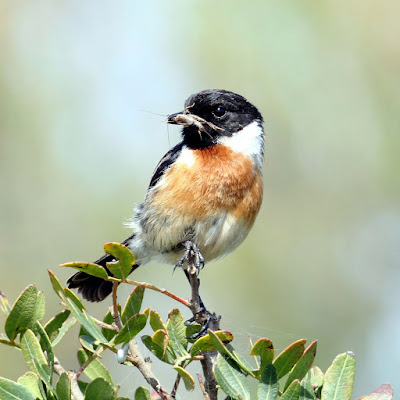 Stonechat
Other birds seen during three hours of watching Linnets fly around but not in - a single Goldfinch, 2 Buzzard, 2 Reed Bunting, 2 Wren,2 Chaffinch, and the pair of Stonechats.
Many thousands of geese flew off the marsh and headed inland this morning. A local shooter with a regular handle on these things opined that the first calm and frosty night for weeks had seen an influx of ‘pinks’ from the Scottish Solway, perhaps as many as 15/18,000. 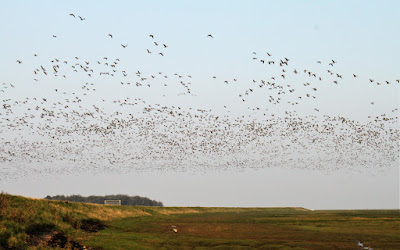 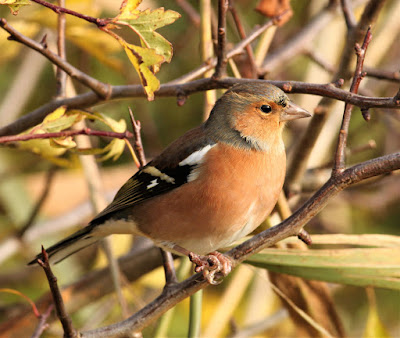 Chaffinch
And now those Linnets need checking on a regular basis, as does the seed that we left behind.
Let me know how many Linnets you count and also whether the Stonechats stick around.
Linking today to Eileen's Blogspot and Anni in Texas.