Between rain showers I’ve regularly checked out the Linnets at Gulf Lane in the hope of a ringing session. The visits gave a series of unpredictable and disappointing counts between zero and 50. These are numbers that inspire little confidence in a catch of Linnets, a species that is in any case nervous, jittery, flighty and difficult to catch.
At least one Stonechat, the male, has hung around at Gulf Lane; visible most days at the top of the bramble that lines the ditch, but I now see the female less frequently. A couple of days ago the male caught an enormous caterpillar as below. Into the afternoon light I could not get the photo I wanted but the green caterpillar was quite interesting in being so long and meaty.
Perhaps a Winter Moth Operophtera brumata? Are there any lepidopterists out there? 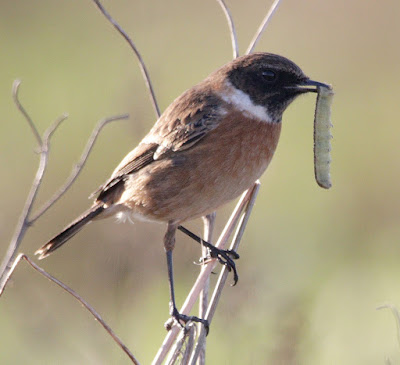 Stonechat
On Thursday and because of the lack of birds at Cockerham Andy and I decided to have a go at the Linnet flock that’s been building close to the River Lune marshes at Glasson Dock, about 7 miles from Gulf Lane. In recent days the flock at Glasson has numbered around 200 birds so I squared it with Stewart the land owner for a visit and met Andy on site at 0800. 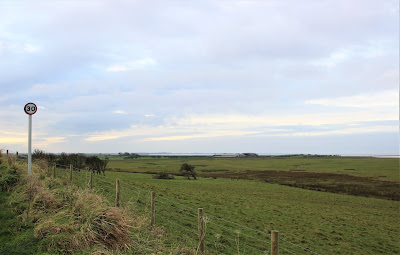 River Lune marshes, Lancashire
The wind was a little fresh and from the “wrong” direction but we caught 8 first winter Linnets, 5 males and 3 females. Following our couple of hours on site rather than the more usual spot counts we now estimated the number of Linnets at 400+. 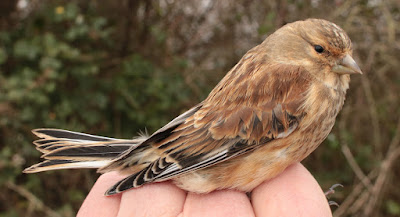 So now we await a morning of wind from the north and sheltered nets or that real rarity, a frosty morning of zero wind.
Stay tuned for more news soon from Glasson Dock of Morecambe Bay.
Linking today to Eileen's Blogspot and Anni in Texas.