Before I get into the 'nitty gritty' of today's post, I just wanted to have a moan about the weather...again! Alice and I were due to have a ringing session at our Bowland feeding station this morning, and I had to call it off at 6:30 this morning, for what feels like the umpteenth time in the past few weeks!
There seems to be a pattern emerging, in that I check the forecast the night before, and all looks tickety boo, then in the morning the forecast has changed, or it is raining/sleeting/snowing/blowing a hooley etc. This morning was yet another case in point. I rolled out of my bed at 0630, as I said before, and I could hear water gurgling in my sun lounge guttering. A quick look outside and it was sleeting, and in the time it took for me to text Alice to say that ringing was off, it then started to rain! Three hours later, and it was still raining. As I look out of my office window as I type this, glorious sunshine. I think it's called Sod's law!
Anyway, today's blog title refers to two bird species that I observed perched when I was out surveying yesterday morning that always surprise me when they do; one species does perch, but only occasionally, and the other perches more regularly, particularly when nesting, but looks rather incongruous when it does. But more of that later.
As I have mentioned before, this particular survey site in west Lancs has four VPs, plus a length of transect. I alternate the VPs around in terms of order, and yesterday morning I was in the layby of the busy road that I have mentioned before. It was cold and grey, with a light north-westerly wind, and later some showers would run in on the prevailing wind. But, there were some Pink-footed Geese opposite the layby, and they looked to be in good numbers too. I had to climb over the central console of my car to sit in the passenger seat, because if I had got ou,t they would have flushed for sure. In total I counted 1,867 Pinkies and I gave them a good grilling, but I couldn't find any other Geese species amongst them. The only other birds in this field was a small flock of 17 Lapwings.
I moved on to my second VP and transect, and this area contains an area of scrub that is impenetrable, so it's a case of standing and listening along the edge. The ditch that forms the eastern boundary had recently been re-profiled with a tracked digger, and this allowed some access to the easternmost scrub, and it also played host to perching bird number two.
A number of Blackbirds fed and called from the area of scrub, as did a single Song Thrush and three Fieldfares. A Goldcrest, ten Greenfinches, a Grey Wagtail, a Reed Bunting and the usual roosting six Snipe were also recorded from this area.
Adjoining the scrub is a Hawthorn hedge and I picked up three birds flitting along the top of the hedge and periodically they were perched. At first, I couldn't get my brain in gear because they didn't call and I only had fleeting glimpses; streaked upperparts, long tail, streaked underparts.... Then the penny dropped and they were three Meadow Pipits flitting along the top of the Hawthorns. Of course, Mipits will perch up on scrub, trees etc, especially during migration, and I have seen them do this before, but it always takes me by surprise.
Below you will find a picture of perched bird number two, and I apologise for the quality of the picture as it was some distance away. Little Egrets of course nest in trees, so they do indeed perch a lot, particularly during the breeding season, but they never look comfortable when they do. This bird was perched in some scrub above the re-profiled ditch, and I am sure that it was using the elevation to enable it look down into the water. It was trying to walk along the branches at times, and as I said before it looked so incongruous doing so. 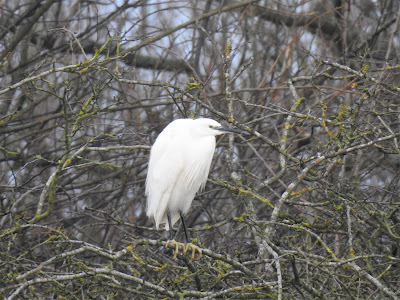 I finished the day off with a quick walk along part of the Wyre estuary with Gail, and noted in my head the 20 Redshanks and 32 Oystercatchers feeding in the quay, and tried to remember to put them in my notebook when I got home.
It's looking fairly settled, or it is according to the pesky weather forecasts, so hopefully I'll get out ringing over weekend. I hope I don't regret saying that!