A call on Monday from Mike Foley prompted this trip down toWall Farm near to Telford. A Steppe Grey Shrike had been reported from there(firstly identified as a Great Grey) and Mike managed to get down on Tuesday andas my work didn’t take me anywhere near I managed to take Friday off and takethe 2 hour drive down to this small nature reserve. I must say I was a littleworried as first as my trips to Shrikes have mostly proved fruitless over theyears and as Bird Guides had reported the bird before 8.00 most of the week andit wasn’t until after 10.00 that it showed up on the report today. Afterparking up in the farmer’s field and dropping my £3.50 (all being donated tothe British Legion) in the bucket I took the 10 minute walk down to the edge ofthe ploughed field from where the bird could be viewed.  It was quite distant at first, approximately600m and though well out of range for photography it was easy to pick up withthe scope. For the first 2 and a half hours it stayed at the bottom end of thefield but stayed mainly in view occasionally dropping to the ground beforereturning to the hedgerow or to a high point on a bush or tree. Eventually itstarted to move closer and spent about half an hour around lunch time at about400m where I was able to obtain a few record shots. I must admit with these orany other photos I’ve seen I’d struggle to distinguish it from the Great GreyShrike and even looking in my reference books and the internet I’ve failed togain any real knowledge about this species, a copy of Shrikes of the world ison its way. After about 4 hours I decided to head home happy that I’d added theSteppe to my Shrike list having only seen Great Grey and Brown I’ve still got along way to go. 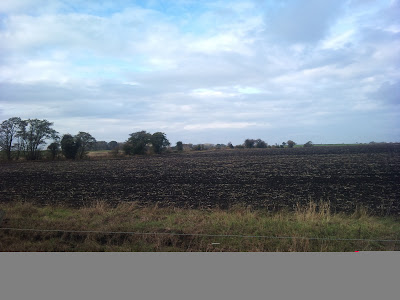 Above the ploughed the Steppe Shrike could be viewed from, it didn't even make it down as far as the two large trees in the centre of the photograph. 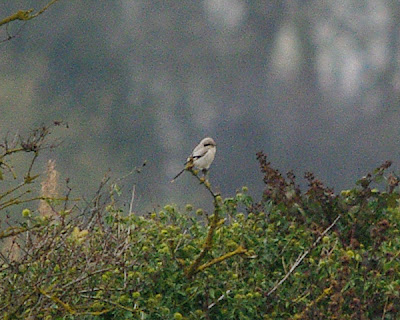 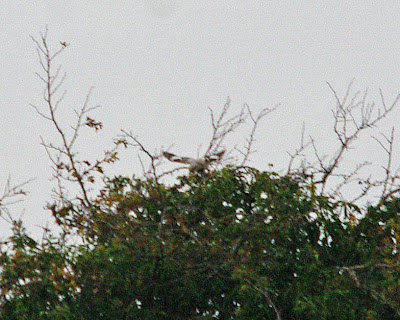 Above you can just make out the white wing pattern, much larger than on the Great Grey Shrike 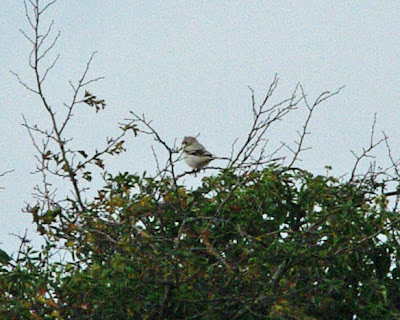 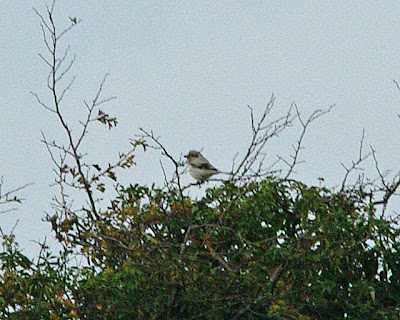