A secretive bird, living in thick undergrowth usually close to water, it is therefore a difficult bird to find/see and PT has done well to achieve this excellent photograph of one at Marton Mere in Blackpool....Thanks Phillip, it was hard to find a permissible photograph of this species and yours saved the day.
The first record of Cetti's Warbler (CW) was only just over 50 years ago in Hampshire 1961, it was heard by an observer who admitted to not being able to identify the song which was heard again the next day by others. Fortunately the bird hung around the area for two weeks when even more fortunately it flew into a mist net and into the history book. Breeding in the UK was confirmed 11 years later in 1972 and numbers increased rapidly to in excess of 1,000 singing males in 2004 rising even more to 1,400 in 2006.
In our own area of Lancashire the first record of CW was of a bird heard at Marton Mere in October 1990, it stayed there almost five months until March 1991, since this record Marton Mere holds the track record for CW's in Lancashire. Nearer to home the CW was first seen at Leighton Moss in October 1995, two days after it was found it was trapped and ringed and remained at LM for a little over 4 months. Now, in 2012 a pair of CW have bred for the first time at Leighton Moss, an exciting and excellent record for our area and evidence of the species range expansion.


As for the name of the bird....It was named after Francesco Cetti who was an Italian Jesuit priest, zoologist, and mathematician, he was born in Germany in 1726 of Italian parents from Como. He was commemorated in the name of the CW by another Italian, Alberto della Marmora - Marmora's Warbler is named after him - who was an army general and naturalist, he had a distinguished career in the Napoleonic wars.

I note the Spotted Redshank is back at Conder Green today, seven days earlier than last year according to my records, and only absent from here a matter of a few weeks. 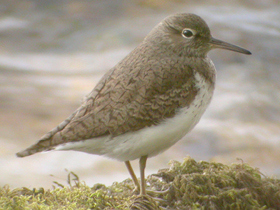 Also back at Conder Green is a Common Sandpiper more or less on time, double figures can be seen here in a matter of a few days perhaps, but certainly in a week or so. Will one stay here again this winter I wonder.