Tuesday proved to be another non-event with just 5 birds caught and zero records for the migration stats.
I'd met Andy at 0700 for another ringing session, hopefully one where the weather on the day matched the forecast of Monday evening; at last, a south-easterly, no rain, patchy cloud and 5mph. the prediction. A change of wind direction that would surely produce new migrants? The potential problem was that the south-easterly airflow actually originated off northerly winds in the North Sea on the east coast.
That was the problem because a catch of five birds is pretty terrible. Two Lesser Redpoll, 1 Goldfinch, 1 Chiffchaff and 1 Robin was all we had for our five hours work. At least two Willow Warblers in song but we didn't catch one. 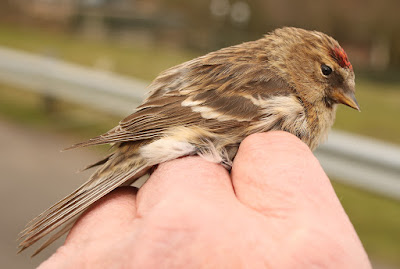 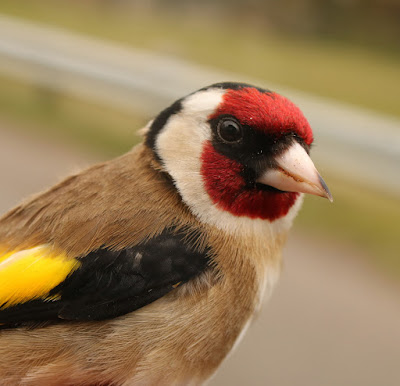 Goldfinch
While we wait for migrants to arrive from south of here the local Greylags have been getting on with life.  A pair appeared with five very newly fledged youngsters, not bad going for 13 April. Look closely at the photo - the youngsters' egg teeth are clearly visible.

Greylags
The incubation period for Greylags is about 30 days, give or take a few. Incubation begins with the last egg laid of between 5 and 7. This means that our pair of Greylags had completed their nest and laid their first egg during the first few days of March.
Such a short post. Not to worry. We don't give up so easily and are due for another go later in the week.