The title says it all really. Decided that since Autumnwatch happened to be in our usual patch and we had knackered the spaniel out with highland gallops over hill and dale and even more over Sand and Bay, we'd leave her for a few guilt free hours and return to Leighton Moss. Actually found it surprisingly quiet, given its half term and Autumn watch had been camped out there. It was also unfortunately quiet on wildlife front too. At least during our speedy trip. We spotted marsh harrier, a few shovellers, coots, mallards, teal, widgeon and noted a lot of migrant passerines flocking in but there was no murmuration to behold and no sight of the otters. Did see the lovely (or in welsh: lov errrr ly) Mr Iolo Williams and also Richard Taylor Jones of the soft voice and relaxing stress reducing wildlife films (who'd been unable to answer my question about how waders know where to land in water shallow enough for their particular wading legs? Anyone know? We wonder if they have built-in tide tables? Or maybe they select a scout whose job it is to find the right level and then the others arrive!!) Anyway for pics- a bearded tit. IF YOU KNOW THE ANSWER TO WADER QUESTION.... do let me know. I've grown up on Dee Estuary and known waders all my days and so somehow never took much notice of them but watching RTJ's live film n Autumnwatch live breakfast it suddenly occurred to me how the redshanks was wading thigh deep and then the oystercatchers came and landed at the right level Anyway here's the bearded tit. 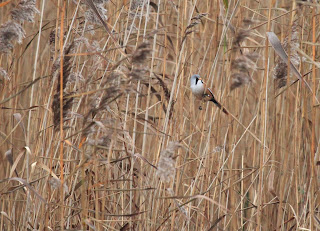